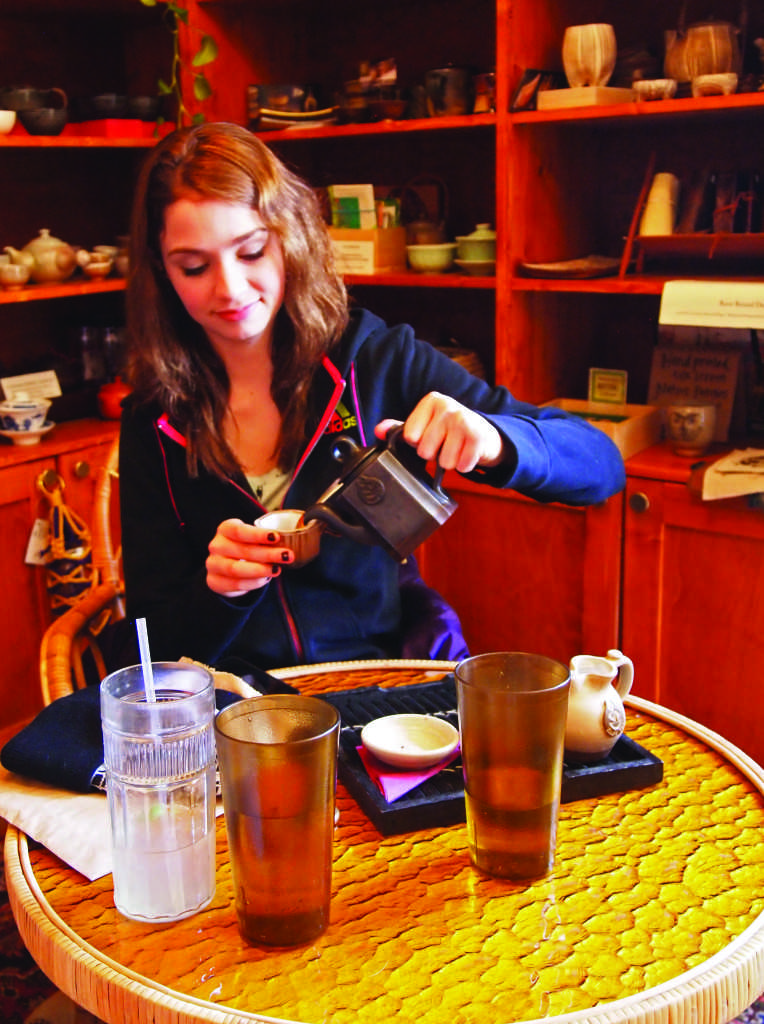 Jennifer Pickering is not a tourist.
Out of boredom while on a trip in Bequai, Pickering, executive director and founder of Lake Eden Arts Festival, decided there was more to the island than the superficiality most Westerners see.
“When I started LEAF, I wanted to create an experience that connected people to different cultures in the world and made them curious about it,” Pickering said.

LEAF is a nonprofit organization composed of three programs: the LEAF Festival, Schools and Streets and LEAF International. LEAF International focuses on empowering youth in different countries through their respective musical traditions.
Last Friday through Sunday, LEAF teamed up with Dobra Teahouse to offer Asheville an experience into the cultures and traditions of different countries across the globe.
“I started LEAF International really by going down to a local school while I was in Bequai and said, ‘How many kids on the island are learning the local tradition of steel pan?’” Pickering said. “She said one, and I said, ‘OK, if we were willing to find a local teaching artist and get steel pans, would you be willing to host a program?’ And she was like, absolutely. Now about 70 kids on the island play steel pan.”
Pickering said the impact on children makes everything worthwhile.
“There’s so much progress in their self esteem and understanding their own history,” Pickering said. “We’re connecting kids through their traditions and their teaching artists.”

LEAF International representatives say they do not push any Western traditions onto the countries in which they have programs.
“We buy the instruments locally,” Pickering said. “We get the costumes made locally. Essentially, we’re just coming in and being the catalyst. In some countries they call us the sponsor or granter, but it’s their program.”

LEAF staff member Elena Chu said raising awareness was a priority last weekend.
“What we’re trying to do is just bring more awareness to the LEAF International program,” Chu said. “We thought this would be a great place to do it because it’s an international teahouse.”

According to Dobra Tea owner Andrew Snavely, his teahouse and the LEAF International program go well together.

“We called this the Loose Leaf Tea Weekend to kind of infuse the culture of these separate countries and their programs, bringing awareness to the children through education and music,” Snavely said. “It’s kind of been a beautiful balance of two amazing programs and beautiful organizations coming together.”

Snavely said he also appreciates and cherishes the traditions of other countries.
“I’ve travelled all throughout India, China, Taiwan, Japan, Southeast Asia,” Snavely said. “I’ve been traveling and learning culture through tea and bringing those direct traditions back to Asheville to serve authentically.”

The weekend proved a success, Snavely said.
“I just see awareness of community, the awareness of culture and that all these traditions are existing in the world,” Snavely said. “It’s important for us to understand them.”
Snavely said he travels every year to expand his knowledge and gains new relationships and new experiences.
“We buy all our tea directly from the countries,” Snavely said. “We travel annually to establish relationships with different tea farmers and then import everything from there.”
According to Snavely, one of his most memorable experiences happened on one of these trips.
“I think traveling to Laos was probably the most third world, off-the-grid country that I’ve ever been,” Snavely said. “I travelled up a mountain 14 hours to discover this tea that was growing in wild tea trees. In the forests, they’re still living in hill tribes, so the hill tribes that live in the mountains and live off the land harvest this particular kind of tea. Being a Westerner and going to their village and coming up on the soil and tasting their tea was really touching them as much as it touched us. That’s the most kind of far away from home that I’ve ever felt. Supporting them and buying tea from the village is a big deal for them knowing that we were Westerners.”

Pickering said respecting the culture of the country one visits creates an impact for both the native and the foreigner.
“When you travel, you get a glimpse into a different place, and you kind of get a feel for it, but when you go into a place as one who’s there to honor them and to honor their traditions, they welcome you into their world,” Pickering said. “You get to really feel a whole different level of what that place is like, and you have connections and it changes your world. It opens it up.”

Pickering said she will continue to create programs in more countries as well as increase the number of countries LEAF International already sponsors.
As for Asheville residents who want to experience a different culture, Snavely said Dobra can supply the tradition without the airfare.

“For an affordable price, you can have an authentic tea experience,” Snavely said. “Bringing that kind of cultural experience to the tearoom is very important.”

One thought on “Collaboration for culture: Dobra Tea, LEAF, partner to infuse culture in downtown Asheville”