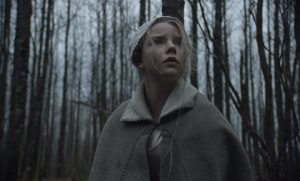 (Photo courtesy of A24 Studios)

Eggers ignores cliché scare tactics, instead relying heavily on eerie imagery and sinister tone to explore a Puritan family’s struggle with the occult.

After being excommunicated for heresy, William, played by “Game of Thrones” actor Ralph Ineson, relocates to uninhabited land with his wife Katherine, daughter Thomasin, son Caleb and fraternal twins Mercy and Jonas.

The family cultivates a life of seclusion, building a new home, livestock stables and gardens for farming.

One afternoon, Thomasin and Samuel engage in a game of peek-a-boo. After Thomasin uncovers her eyes a fourth time, she discovers her infant brother has been abducted.

Only rippling branches and the snaps of breaking twigs provide clues to the baby’s whereabouts in the first unsettling scene of the film.

The trail of clues lead Thomas into the foreboding forest in search of her missing brother. She returns home empty-handed, forced to disclose her brother’s kidnapping to her family.

The film cuts to a disturbingly gruesome scene involving the baby, introducing the audience to the witch and her vicious intentions. She is seen admiring the child’s soft,silky skin, caressing him with her long, wrinkled fingers.

The witch slaughters the infant, mixing an ointment with his blood, fat and entrails. She bathes in the concoction, writhing her naked, aged body in ecstasy.

Devastated by the loss of her infant son, Katherine seeks comfort through devout praise and worship. Every waking moment is spent repenting her family’s sins.

After crops begin to fail, Thomasin and Caleb venture into the woods to hunt for game. After their dog chases a hare deeper into the wild, Caleb darts off after him.

Caleb searches for the lost canine until nightfall and eventually discovers the mangled, disemboweled body of his pet near the witch’s lair.

She opens her door, appearing as a curvy, beautiful young woman. The witch uses her body to seduce Caleb, entrancing with her seductive movements and gaze before violently pulling him into her abode.

Her scarlet cape provides a stellar use of imagery, juxtaposing the overall bleak palette of blacks and grays that dominate the film.

Caleb returns to the family’s farm the next night naked, shivering from the cold rain.

He appears in a zombie-like state, unresponsive to human interaction. His mother tucks him into bed, relieved over his return.

The next morning, Caleb appears possessed, jerking in agony and pain as he speaks and screams in demonic tongues.

The family begins to suspect Thomasin of witchcraft, considering she was present during both boys’ abductions. Thomasin thinks her parents, especially her father, are also dabbling in the dark arts.

The family’s bond slowly withers under broken trust and accusations and they turn on each other in their desperate attempts to identify the witch.

The director’s depiction of hysteria leading up to the Salem witch trials is downright disturbing and unnerving. Eggers’ film evokes a strong emotional response to his visual display of the downfall and destruction of purity and morals.

Some scenes are simply unpleasant and bothersome to watch, serving as a reminder Eggers is a legitimate connoisseur of horror. His talent is undeniably evident by his powerful debut in the world of cinema.

Eggers received the Directing Award in the U.S. Dramatic category at the 2015 Sundance Film Festival for the film.

Lotus lights up the Orange Peel during Gilded Age Tour