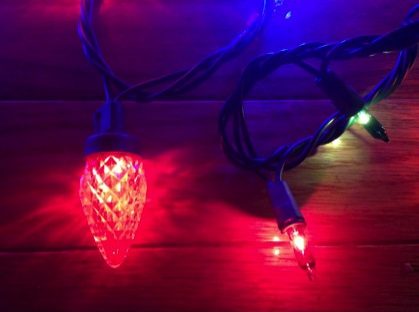 Throughout the holiday season, it is common to see houses lined up with strings of bright, shining lights. Sustainability and cost are oftentimes two common factors that are taken into consideration when choosing these lights.

The merits of using LED lights compared to traditional incandescent bulbs include using less energy and lasting longer, but they may not be economically practical.

LEDs carry a much higher price than their incandescent competitors and depending on use it may take several years to see any financial payoff, according to Consumer Reports.

Kevin Moorhead, professor of environmental studies at the UNC Asheville, said while saving money is important, the environmental impact of using less energy remains the greatest benefit of using LEDs.

“Translating this into saving more on a monthly power bill is a good thing, but it’s more important than that,” Moorhead said. “What a lot of people don’t do is take that step in think of ‘How am I getting my power?’”

Moorhead said people should keep in mind how the electricity is produced when deciding on which type of holiday lights to purchase.

“Because of where our energy comes from, in our area of the world, most of this is derived from coal burning,” Moorhead said. “We also have two natural gas combustion turbines at the power plant with a different set of environmental issues, but they’re both fossil fuels.”

“The LED lights, this is true for compact fluorescent bulbs as well, the way that they’re designed is to give you the equivalent amount of wattage, but they utilize a whole lot less power and energy to give you that wattage,” Moorhead said.

Moorhead said even something as small as switching to LED lights for the holidays can make a big difference when it comes to the environment.

“The bottom line is if we’re using less coal and less natural gas to do an equivalent amount of work, in this case, wattage of a light bulb, then in theory, we are having a benefit for the environment.”

As the holiday season approaches, the North Carolina Arboretum is providing residents with a way to celebrate while reminding them to stay green with energy efficient holiday lights.

The North Carolina Arboretum’s Winter Lights exhibit, which opens Nov. 18, expects to draw more than 27,000 people, allowing visitors to explore the public garden during the wintertime through lighted displays, according to Marketing and Public Relations Manager Whitney Smith.

“This year we will have almost 500,000 lights. It’s grown every year. They’re all energy efficient LED lights, which is really exciting,” Smith said.

Smith said the choice to use LED lights within the display reflects the Arboretum’s commitment to environmental protection and sustainability.

According to the U.S. Department of Energy, LED bulbs use 75 percent less energy and last 25 times longer than traditional incandescent bulbs.

LED lights also tend to be safer than incandescent lights because they maintain cooler temperatures while in use, thereby reducing the risk of fires, according to the Department of Energy.

Saving energy also amounts to saving money. According to information from Duke Energy Spokesperson Meghan Miles, using large, incandescent bulbs for an average of six hours per night can add as much as $80 to an electric bill each month.  Customers who switch to the same sized LED bulbs only see about a $7 increase on their monthly power bill, Miles said.

Part of the exhibit’s focus lies in educating the public about energy efficiency through the use of light-emitting diode bulbs, a type of lightbulb known for its low energy consumption.

“Winter Lights is basically an outdoor winter wonderland,” she said. “It’s unlike any other light show you’ve probably experienced because you’re walking through the gardens, not just driving through a big, flashy show. It’s very artistic and unique.”

Leave a Reply to Myself Selferson Cancel reply