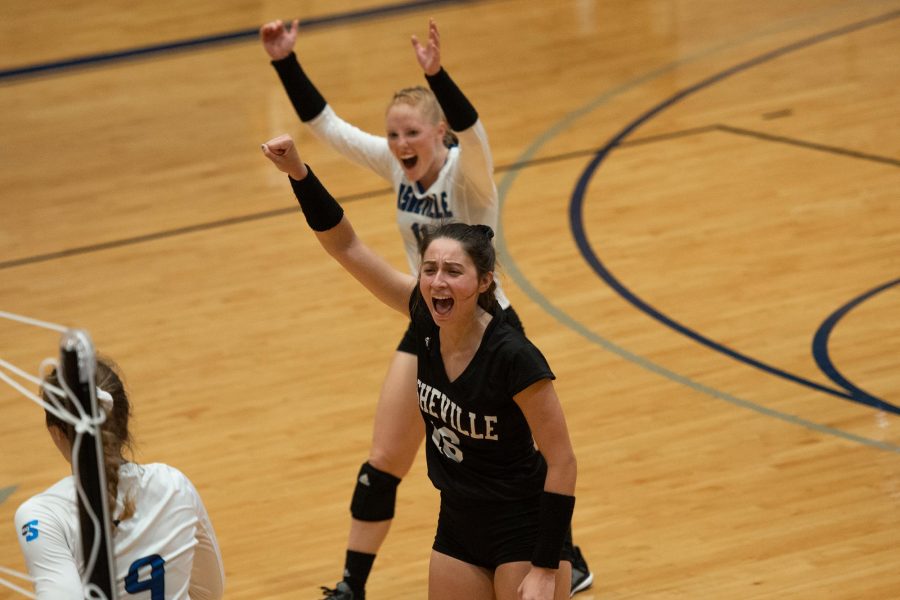 
Henry McGannon
Sports Staff Writer
[email protected]
Madisen Zyburt was dubbed Big South defensive player of the week for the second time this year. She was given the award after impressive showings against Presbyterian College and Charleston Southern, finishing with 16 digs in a gripping five set win against Presbyterian and 15 digs in the three set win against Charleston Southern.
Assistant Coach Jen Peterson has nothing but great things to say about the UNC Asheville senior.
“Maddy is a very fun, very hard working young woman. She has a lot of volleyball knowledge and experience,” Peterson said.
Zyburt’s teammate Kailey Hackett also described her as an extremely hard worker.
“I think that Maddie’s success is due to her hard work attitude this whole season. She’s been working really hard in practices and never gives less than 100 percent. Maddie pushes herself to the fullest every single game and practice and inspires the whole team to do the same,” Hackett said.
As a senior, Zyburt often plays the role of a leader on and off the court for the Bulldogs. She gets the whole team ready to play their hearts out before every match.
“Maddie is a spark of energy on the court, she really gets everyone fired up before matches and cheers louder than anyone else even when we are down. Maddie is also good about helping the team shake off the loss of a set so we can bounce back and win the next one,” Hackett said.
That is high praise coming from a teammate. It is crucial for a team to have a player who can get everyone charged up with energy before a match. Even more impressive is her ability to keep everybody’s spirits high after a bad set.
Both of her coaches commented on her leadership abilities.
“She is a senior this year for us, so she shows a lot of maturity. She has been a leader on and off the court for the team. She is a verbal leader and also leads by example through her hard work and practice, individually and in games. That has really set the tone for our very young team that we have,” Peterson said.
Head Coach Frederico Santos also spoke of Zyburt’s leadership abilities.
“As a senior and as a captain, I think she provides leadership on the court. She communicates very well with her teammates,” Santos said.
UNCA junior and volleyball player Carter Kennedy commented on Zyburt’s leadership abilities.
“She does a great job of being a leader for the team on the court by leading by example. No one else I know fights through so many injuries, all at the same time for that matter, just so they can play the game they love,” Kennedy said.
Kennedy and Santos also noted Zyburt’s volleyball IQ and her knowledge of the game.
“On the court, Maddie does a great job of helping others and holding them accountable. It really benefits the entire team. Personally, she’ll let me know what I can fix technically so I don’t make the same mistake twice,” Kennedy said.
Santos expressed his feelings about Zyburt’s ability to know what is coming next on the court, an imperative skill for a defender.
“It’s knowledge of your job, knowledge of what the opponent is doing, all of these things are helpful and she is always support for her teammates on the court,” Santos said.
Zyburt has had success all season, boasting seven games this year with 20 or more digs. Zyburt also carded an incredible 33 digs against Western Carolina University.
“Maddie had an insane amount of digs against Presbyterian, many of which may not have been accounted for in the stats. As a defender, having the mentality that no ball will hit the ground inspires others on the team to do the same. It makes the hitters confident they can swing wherever they want because they know they’ll have a teammate backing them up no matter what,” Kennedy said.
In addition to being a huge asset to the team on the court, Zyburt is a huge asset off the court. Her teammates look to her when they need to push themselves through a tough practice, they look to her for technical advice and they even look to her when they need to laugh.
“Maddie is the giggliest, most sarcastic person I know. She always knows how to make everyone smile and can get everyone on the team laughing in 2 seconds. She is a master of the eyebrow raise and no matter what, I know I can always look to Maddie to make me smile,” Hackett said.
“The fact that she continues to work hard despite the pain she’s in and is still playing really well is just one of the many reasons I admire Maddie,” Kennedy said.
Assistant coach Jen Peterson simply said, “I love that kid.”
Zyburt is a cornerstone of the bulldog defense and a crucial member of the team. She is beloved by her teammates and coaches. She is having a fantastic season and only has three home games left as a bulldog. Her last home game will be against USC Upstate on Nov. 6. Go watch her play while you still have a chance.
Delete Image
Align Left
Align Center
Align Right
Align Left
Align Center
Delete Heading