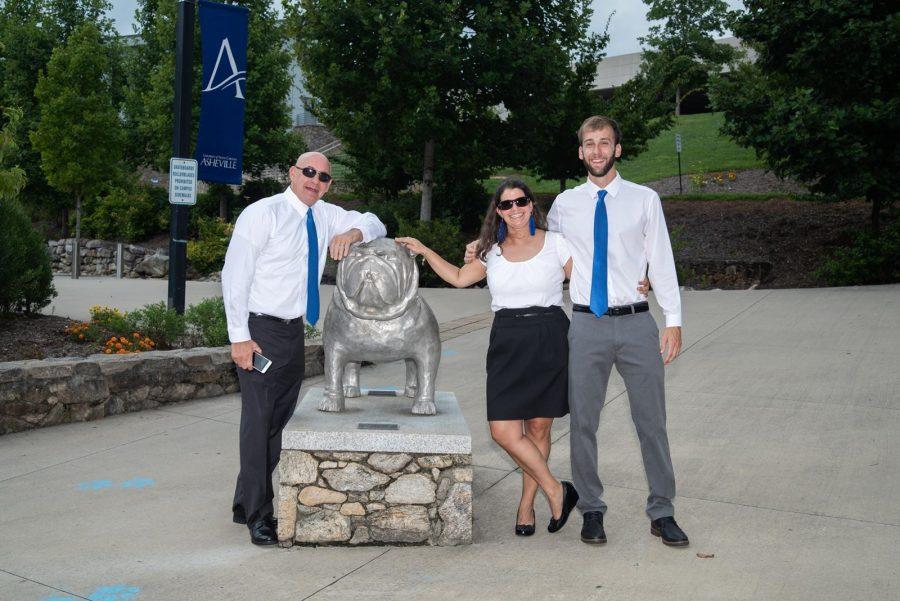 
Morgan Rulevich
Contributor
[email protected]
Hot water begins to bubble as 6:15 a.m. approaches. She pours a large cup of tea, softly blowing the steam away from her lips.
They begin to meander in, dragging their feet and rubbing their eyes from a cozy night’s sleep. Sitting in silence, they listen to the moans and groans of a concrete dungeon filled with a 12-foot ice bath awaiting submersion.
All heads turn quickly as she waltzes across deck. The clock strikes 6:29 a.m. and the girls take in one final warm sigh. Coach Elizabeth Lykins smiles ear to ear yelling “on the top” as the swimmers fly into the untouched abyss, rippling their lasting warmth away.
Elizabeth Lykins, the head coach of swimming and diving, began the women’s swimming program in 2012 by holding tryouts and looking for anyone willing to commit. The team now ranks top four in the Coastal Collegiate Sports Association and recognizes a new additional women’s dive team.
“My dad swam in college and he really wanted the opportunity for his kids to swim and continue being on swim teams,” Lykins said.
Cramming into the 12 passenger van, smashed between the seat and her swim bag, Lykins and her four siblings were shuttled to the pool every day.
The small community in Gainesville, Georgia, formed a club team in ‘82 called the Gainesville Swim Team. Her father, Larry Lykins, was a former college swimmer and became the driving force of the GST.
In high school, Elizabeth Lykins competed in basketball, softball and swimming. With senior year approaching quickly, she had to decide what to play in college.
“There used to be a book of college swimming since there was no internet. The book listed every college universities’ swimming teams including best times, affiliation, coach’s name and phone number,” Lykins said.
Standing in the kitchen hallway, hair dripping from her second swim practice, Elizabeth Lykins eagerly called the College of Charleston head coach once a week awaiting an offer to compete on the collegiate level.
Lykins was named captain her sophomore, junior and senior years at the College of Charleston proving to be a consistent leader in and out of the pool. She competed in the 200-yard fly, 400-yard individual medley and the 1650-yard freestyle at the Southern States conference each year. After competing during her four years of college, Lykins got an internship with the Disney Vacation Club at Hilton Head, South Carolina.
Years later, spending every dime in her bank account seemed like a dream come true. Traveling nine months around the world, teaching swim lessons, coaching a master’s team in Scotland and becoming a certified diver in the Great Barrier Reef kept Lykins busy.
Travel became a necessity for Lykins as she finished graduate school, coached as an assistant and took a job alongside Head Coach Neal Studd at the Florida Gulf Coast University creating the swim and dive program in 2007.
From the crisp mountain air of Telluride to the snowy streets of New York, basking in Florida’s heat for 5 years was enough for Lykins.
Waiting eagerly for a callback, the 2012 UNCA women’s swimming season approached rapidly as if creating the FGCU swim and dive team from the ground up was enough.
“She is a very motivated, mature and realistic swim coach that loves her job,” her father said.
Elizabeth was swimming competitively by the age of six and at 12, she settled on swimming. All of the coaches around her knew she would be a swim coach someday because of her organization.
In high school, she won a $500 scholarship to college for the highest grade point average as a senior swimmer. At the College of Charleston, she took leadership and organized everything on the team earning the most outstanding swimmer MVP award senior year.
At her conference junior year, she scored in the mile against Georgia Southern pulling ahead at 900 yards to out-touch her competitor.
“I admire everything about her. Her adventurism spirit lives life to the fullest and she takes advantage of everything she can,” Larry Lykins said.
Coming into her seventh season as a head coach, Lykins continues finding new, young women willing to make a difference and commitment to the program.
“She was easy to talk to and I appreciated that she highly valued a positive team culture and a balance between athletics and academics. This is what initially drew me to UNCA, and after my official visit, I knew that this team and this university was the perfect fit for me,” said Katie Brown, senior collegiate swimmer at UNCA.
Brown smiled eagerly as she explained the swim team’s energy. Her energizing tone resonated against the walls.
“I would say our team’s energy is both my favorite aspect and our strongest attribute. This season has been pretty grueling in terms of training, but we approach tough training by bringing each other up,” Brown said.
Elizabeth Lykins continues to build culture and excitement to the program by introducing a first-ever women’s diving team. Teammates say they’re making program history and definitely going to help take the program to the next level.
“I’m most proud of the culture of the team. The quote ‘because of you, we are good’ reminds myself why I do these things and it’s all because of these ladies,” she said.