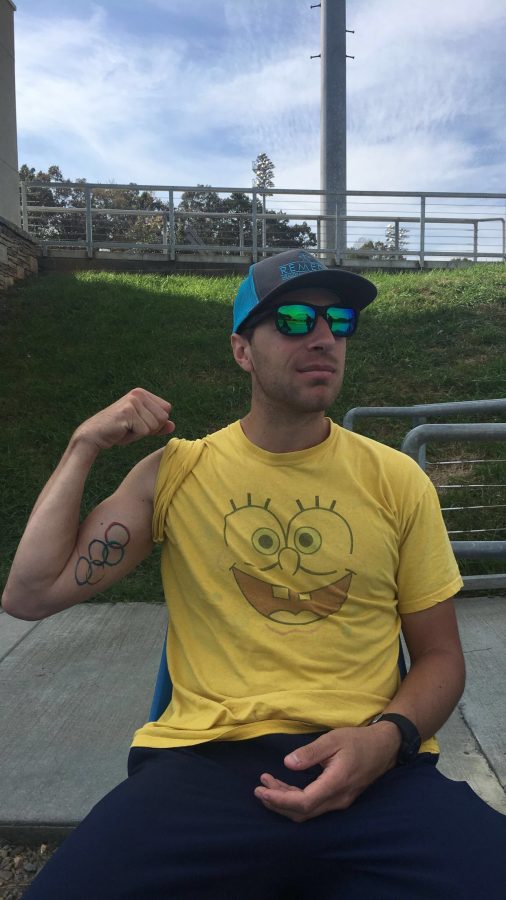 Milan Rustic, Olympian, poses for a picture during the track team's practice. Photo by Desire Brown


Milan Ristic, 2016 Olympian and former UNC Asheville track athlete now shares his expertise with the
sprinters and hurdlers on the UNCA track team during their practices.
Ristic competed for the Bulldogs in 2012 and ‘13 before competing at the University of California Berkeley, where he received his qualifying time in the 110-meter high hurdles with a time of 13.39.
“When I had the mark that qualified me for the Olympic Games, I just could not believe it. I watched the video of my race and then the video of my reaction when they told me the time, and it still looks unreal,” Ristic said.
Ristic competed in the Rio Olympics as a member of the Serbian national team. He remains a Serbian national record holder in the indoor 60-meter hurdles and the 110-meter hurdles. UNCA recruited Ristic, and he broke the school’s record in the 200-meter indoors, 60-meter hurdles, 55-meter hurdles, 60-meter indoors, 55-meter indoors, long jump outdoors, 110-meter hurdles, 100-meter and 200-meter outdoors. He plans to compete professionally for a few more years.
“It wasn’t real until I stepped on the track. I treat every competition the same, and I want to be the best at every race,” Ristic said.
Two male athletes who committed to UNCA decided to transfer just in time from the track and field team, opening up extra scholarship money for the former international UNCA athlete.
“It was us and Eastern Illinois. The two schools that seemed to be the most interested and the ones that were moving the quickest and I just moved a little faster,” said Joel Williams, an assistant coach for UNCA track and field.
Williams worked with Ristic for the last six years. Williams reconnected with Ristic after his Worlds Championship meet when he moved back to Asheville with his now wife, Meredith Ristic.
“He couldn’t get over the amount of work we did,” Joel said. “But he was very coachable.”
Ristic started running track in the fourth grade at age 10. He never knew he was going to be a professional runner but always had the desire to run in an Olympic Games.
“It’s hard but I enjoy competing so that’s the only thing I look forward to,” Ristic said. “I want to be the best one.”
Ristic prioritized his education, but as he kept improving throughout his collegiate career, he decided to give  his professional career a chance after graduation. Ristic plans to continue his education once he retires.
“Every time it gets harder I want to give up, but that’s not the way out. I want to finish on a high note and that’s why I want to run a couple more years,” Ristic said.
The UNCA alumnus now pays homage to the university’s track and field team with his expertise.
“It’s pretty cool working with him because he gives good advice and he knows what he’s doing,” said Kenzie Bouakhaunphong, member and hurdler of track and field team.
Bouakhaunphong and teammate Nick Roberts both say Ristic gave them advice which will carry on with them through the season, which includes being aggressive and to use their arms to help attack the hurdles.
“It’s a great experience. I am truly honored to be working with an Olympian. I’m just very thankful that he’s passing down all this great knowledge about hurdling, making us better people, better track athletes and just better all around,” said Roberts, third-year hurdler and freshman on the team.
Bouakhaunphong and Roberts were not familiar with Ristic prior to becoming runners at UNCA, but appreciates his efforts to make them better athletes .
Williams said it’s an advantage for Ristic to work with his athletes because it gives them the athlete and coaching perspective.
“It’s a real advantage for people to have someone who has competed at the highest level athletically but can actually coach you through how it should feel,” Williams said.
The two hurdlers said they were intimated the first few times working under Ristic because of who he was as a runner.
“I thought he expected a lot,” Bouakhaunphong said.
Ristic serves as a member of the Serbian national team and remains undefeated in the 110 hurdles race in his country since 2010.
“I learned at a very young age not to get nervous. I know this is what I do, I’m good at it. I don’t need to be nervous,” Ristic said.
Ristic knows when to flip the switch by leaving everything on the track and not looking back once stepping off the track. He enjoys his life outside of track and that’s why he’s not burnt out, he said.
“He’s totally committed to being the best he can and I feel like that has increased a little bit every year. He does everything to take care of himself,” Williams said. “As much as he’s committed to the sport and his improvement, he’s not so wrapped up that he doesn’t have other interest.”
Delete Image
Align Left
Align Center
Align Right
Align Left
Align Center
Delete Heading