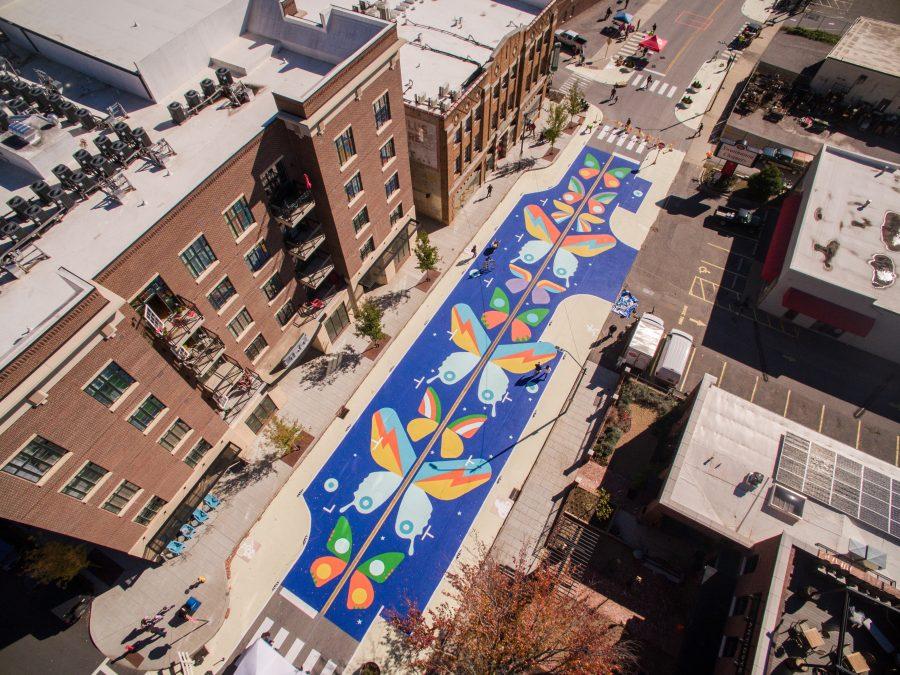 Asheville on Bikes, AARP, the Blueridge Bicycle Club, local artist and the community make Coxe Avenue a safer place for bikers and pedestrians.

Peyton Rodgers
Arts & Features Assistant Editor
[email protected]
Street Tweaks, a combination of Asheville on Bikes, the Blueridge Bicycle Club and the American Association of Retired People, used art and the power of community to create the first temporary multimedia transportation experiment which took three days to put together, starting on November.
The project is expected to last roughly six months to a year and will help create safer transportation in the future by using feedback received from locals.
This will create a safe and exciting environment for cyclists by adding art, stop signs and fixed travel lanes for safe transportation on Coxe


Avenue as part of a project called Street Tweaks.
Mike Sule, co-founder and director of Asheville on Bikes uses their organization to cultivate the culture of urban and commuter riding through advocacy and local events.
“Rather than designing something on paper, we went through a public workshop session, got a lot of input of what people thought they would want and then we sort of refined that and went out in the community, went to another public workshop, came to a final plan with the city, and built it,” Sule said.
Street Tweaks will help create safer transportation in the future by using feedback received from locals.
Asheville on Bikes started when a group of like-minded friends, who often enjoyed urban bicycling and using their bikes as transportation, wanted to design events around urban cycling to get more people on bikes for enjoyment or transportation.
“A lot of people responded to our events and the organization kept growing and growing and I had the opportunity to quit my job as a public school teacher and run the organization and stuff in 2016,“ Sule said.
Asheville on Bikes hosts events such as Bike of the Irish and The Summer Cycle to bring awareness to biking and get involved in the community.
They also focus on educating people on bike safety and basic biking rules by partnering with the Blue Ridge Bicycle Club.
The two organizations teach adult cycling classes and an after school bicycling program at Asheville Middle School, where they teach kids basic urban cycling skills two days a week.
Asheville on Bikes is known to be one of the most popular clubs for student involvement, Sule said. Students often join the club in sixth grade and can continue through eighth grade.
“Our community ride series is wonderful,” Sule said. “We get anywhere between 300 and 700 people depending on the weather and the time of the year we’re hosting it.”
Asheville on Bikes recognizes the participants that have families and accommodates rides for a built-in family experience.
The project took three 12-hour days to create.
Asheville on Bikes’ volunteer base came together with the Blue Ridge Bicycling Club and AARP to put it all together.
“We just attracted the widest web and we had over 150 turn out throughout the process,” Sule said.
The weather was the biggest challenge on Friday, when volunteers were putting the project together, but skies cleared up on Saturday and Sunday, allowing the project to be completed within one weekend.
Local artist and owner of Sound Mind Creative, Jenny Greer Fares created the butterfly design on Coxe Avenue that leads down to the art council. Fares is a senior graphic designer and an art director.
She has been a graphic designer for roughly 20 years creating posters and murals for local restaurants.
“It’s kind of like a cool thing to be a part of because it’s a big statement with what they’re doing on Coxe Avenue with so many elements,” Fares said.
The butterfly design is a representation of transformation from the caterpillar to the butterfly. The different butterflies also represent diversity within the city.
“I was trying to express there’s a lot of different people, there are different butterflies that live here,” Fares said.
Fares drew the butterfly design with pencil and then transferred the design to her computer where she picked the color pallet.
“A lot of community involvement,” Fares said. “It ties you in to the streets and it’s really cool, that’s what art can do, it gets the community involved.”
Justin Mitchel, photographer and videographer, is a member of Asheville on Bikes. In the past, Mitchel was a DJ for Asheville on Bikes’ community bike rides.
“It’s a lot more physical than my usual DJ gig since I am playing tunes while pedaling a 60 pound cargo bicycle with a 1,000 watt speaker and mixer attached to it through the streets and up the hills of Asheville,” Mitchel said.
He captured photographs of the Street Tweaks project process and said the colors in the artwork were amazing.
“The project blends art with a functional purpose which is a win-win for Asheville and the cycling community,” Mitchel said.
He said he enjoyed the experience of seeing the project come to life through his captured photos.
“I was excited to capture the process of the mural coming to life so I could share with others,” Mitchel said.
He said he was surprised by the amount of reactions the photos were getting on social media platforms.
“I was happy to see the excitement and positive reaction from the photos and the attention it’s brought to the artist and groups that made it happen,” Mitchel said.
Mitchel said people come to Asheville from all over to experience the local art, the city and bike riding opportunities.
“This project reinforces all those qualities as well as providing a safer, and more beautiful, way for anyone living on the Southside of downtown to access the city,” Mitchel said.
Delete Image
Align Left
Align Center
Align Right
Align Left
Align Center
Delete Heading