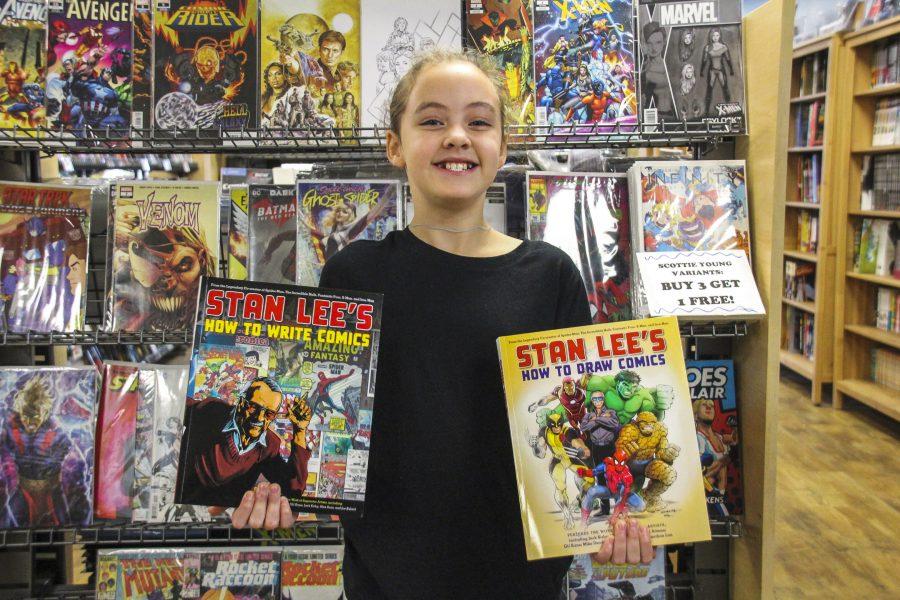 Taylor Sexton
Arts & Features Editor
[email protected]
Chasing the chill from the brisk and damp fall day, a girl steps into a heated comic book shop, eyes scanning the floor to ceiling shelves in wonder. She steps up to them, eyes scanning for which adventure she’ll go on next, before landing on an X-Men comic. She grabs it excitedly, already diving in and on the cover in bold print beneath the title sits the most iconic name in comics, Stan Lee.
Stanley Martin Lieber, better known by his pseudonym Stan Lee, created some of Marvel Comics most beloved characters, passed away on Nov. 12 at the age of 95.
“When it comes down to it, we’re going to remember the creators that stood for something with their work. And that’s why we remember Stan Lee because he wanted to make statements with characters. He wanted to let people know that anybody could be a hero,” said junior Sara Williams, an avid comics fan.
According to Williams, comics have been around since the 1800’s. Comics were used primarily as literature for those in the lower class due to the illiteracy rates and they could get the story through pictures.
Before Lee became a part of Marvel, he worked as a World War II reporter, then started in the lowest branch of the comics industry and


worked his way up. He then teamed up with Joe Simon and Jack Kirby to help build the foundations of Marvel Comics in the ‘40s. The trio were the ones to legitimize the comic book industry as a place of valid, critical and socially aware place of storytelling, the English student said.
“He really helped to legitimize an industry because they went after issues that you wouldn’t expect to appear in comic books. I mean, Simon and Kirby created Captain America as a direct protest statement. We got the X-Men as a direct social commentary like these things never existed in a vacuum and Stan made a very conscientious point with that,” Sara Williams said.
She said Lee’s belief in everyone’s ability to be a superhero, regardless of status or beliefs, set him apart from other creators in the industry.
“I think the important thing to remember is Stan Lee is an icon, but he’s also a man. He was never perfect, but he did so much to just spread positive stories of heroes who were very human, overcoming such massive obstacles, to essentially say to the reader ‘This can be you, you can do it too,’” Sara Williams said.
Darrin Williams, owner of Comic Envy, said Stan Lee worked hard from the beginning. Most of his well-known work, such as Spider-Man, X-Men and Fantastic Four, didn’t take off until the ‘60s.
“Stan was Marvel’s creative director for decades, eventually helping to grow the company into the household name it now is. Stan worked against the comics code authority to champion creator rights and free speech within comics, and even after retirement in the ’90s, he continued to be the face of the company. No one sold Marvel better than Stan,” Darrin Williams said.
He said Lee was the ultimate salesman and was the face comics needed in order to become the staple they are today. He said he’s sure someone else would have eventually nudged the comic industry in the right direction, but it would not be like he did. Comics as we know them would have never existed without Lee.
“He was in it 100 percent, every day. Stan lived and breathed Marvel and he loved to talk to people about the characters he helped create. No one had more passion or love for the fans than Stan,” Darrin Williams said.
The store owner said at this point, Lee’s associated with Marvel through reputation only and that the franchise will go on without him, which he finds to be a fitting tribute. As long as Marvel remains, Lee will always be remembered.
Sophomore Evey King loved Marvel Comics since early middle school. She admits because she was so inspired by Lee’s work, she had wanted to be a comic book artist for a while.
“He’s just iconic because he so ancient and had just been in the industry for a while and he just gave a lot of opportunities to people of color, women, just minorities in general. I think his work just really speaks for himself,” King said.
King also went on to explain how passionate Lee was about Marvel. She said even as he was battling with pneumonia, something he’d been battling the last year of his life, Lee would be talking with close friends about future movie cameos.
“I feel like a lot of people just do their job as a comic book writer or artist and then go on with their lives and that’s what he lived for, was making people happy,” King said.
She also said Lee’s goal to make people happy and entertain them was inspiring to her because she also wishes to do good and make those around her happy.
“He realized entertaining people and making others happy and telling stories is just as much as a job and is just as important as building the infrastructure of a city or becoming a banker,” King said.
Though Lee’s movie cameos will be miss, Sara Williams said she thinks Marvel will continue in a direction that honors his life and his message.
She said most every fan in the Marvel community saw Lee as their nerdy grandpa. They all thought he was immortal, so with his passing, there is now a vacuum of space-sized hole in the comics community. The junior believes many creators are going to come forward and help fill that space with new ideas and continuously build up the industry.
For Sara Williams, Lee stood as the human embodiment of possibility.
“He was the guy who was a World War II reporter and then became part of the comics industry and a powerhouse, who started out at like the lowest bronc of working there and just never gave up on his love for this art form. And it’s that reminder that when you care about something, grab onto it and hold onto it and run with it. Even when people tell you that it’s ridiculous,” Sara Williams said.
Delete Image
Align Left
Align Center
Align Right
Align Left
Align Center
Delete Heading