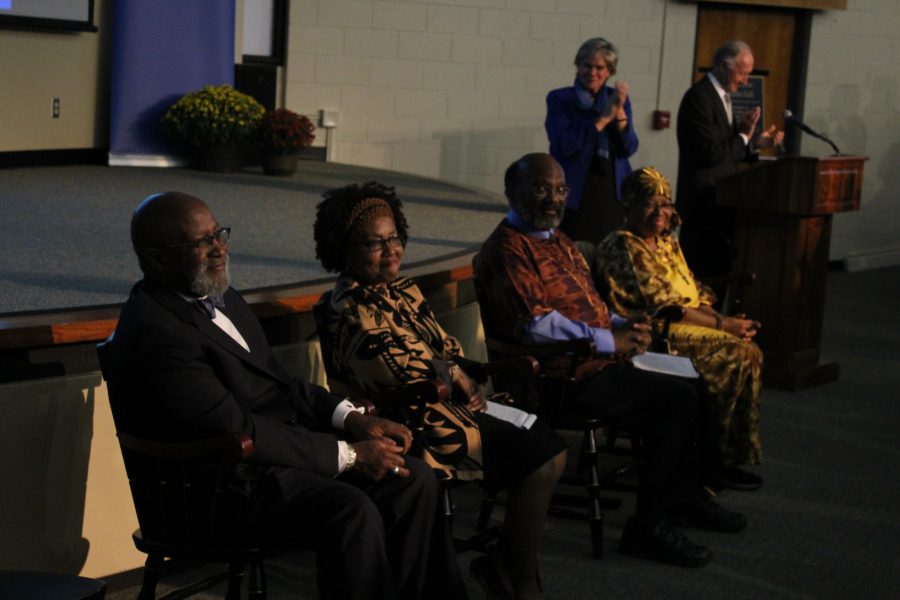 Brailey Sheridan
Copy Desk Chief
[email protected]
Laughter, tears and applause fill the newly named Mullen & James Humanities Hall during a ceremony honoring retired faculty Deborah “Dee” Grier-James, Charles James, Dwight Mullen and Dolly Jenkins-Mullen for their contributions to UNC Asheville and the surrounding community.
“I always tell my kids that the most important things in my life, the things that have made the biggest difference in my life were not things I


could’ve prepared for because I didn’t see them coming. I did not see — what, what do you do, what major do you major in, to get a building named after you? Didn’t see that coming. It was not an honor that I dreamed of,” said Grier-James, a retired professor of English and one of two black female students to desegregate UNCA’s student body in 1969.
UNCA hired Grier-James, chemistry professor James and political scientists Mullen and Jenkins-Mullen to help desegregate the university’s faculty in 1984. During their three decades at UNCA, the Mullens and Jameses created the first African-American Colloquium, a class for first-year African American students to build community and support and foster scholarship, mentorship and advocacy at UNCA and surrounding areas.
“These four professors I think were important to the university, especially as minority faculty because they really did blaze a trail. There had been other minority faculty here before them, but Dwight, Dolly, Dee and Charles, I think really operated in a way that nobody else did,” said Darin Waters, executive director of community engagement.
The UNCA Board of Trustees dedicated the Humanities Lecture Hall to the Mullens and Jameses on Oct. 19. The ceremony began with a speech by Chancellor Nancy J. Cable, followed by Vice Chair of the Board of Trustees Rick Lutovsky, Sarah Judson, Agya Boakye-Boaten, Gene Bell, Marquis McGee and the Mullens and Jameses. The ceremony closed in a traditional African naming ceremony outside of the Mullen & James Humanities Hall by Boakye-Boaten. Attendees included family and friends of the Mullens and Jameses and UNCA faculty, staff and students.
“I’m hoping that when people see that name and they see that plaque, they’re going to want to know about it. We’re seeing that a lot right now, the major conversations going on across the state and across the country about legacies and I think that conversation will continue,” Waters said. “I think that in that way it will force people to think about the legacy that they’re leaving behind by seeing those names on that building.”
The Mullens and Jameses received approximately five minutes each to speak during the ceremony. Collectively, they used their time to speak about hardships and triumphs as African-Americans within a predominantly white campus and community, give thanks to UNCA, their families and the community and give a challenge to listeners.
Mullen, who attended Atlanta University, said he spent a lot of time in graduate school wondering what his professors were talking about because of his disconnect from reality. He later realized his mentors represented the historically black colleges and universities that raised him and laid the foundation for his future as an educator and advocate for African-Americans.
“Our motto at Atlanta University is ‘I’ll find a way, or I’ll make one.’ This is so appropriate here because that is what I see my colleagues and I have done or tried to do,” Mullen said.
In paving the way for African-American students, the Mullens and Jameses faced setbacks and obstacles that black students still face today, according to Grier-James. UNCA gives people the ability to create change, but they’ve got to be prepared to do it by themselves; much like the Mullens and Jameses did in creating the African-American Colloquium, she said.
“At UNCA anything you can dream up somebody will let you do, as long as you bring your own resources,” Grier-James said.
In creating this change, it doesn’t just take being the first to do something, but being the one to actually make the change, Jenkins-Mullen said. This change, according to Jenkins-Mullen, means being available, especially for minority students, to speak with them and learn from their experiences and problems and in many places in Asheville that doesn’t occur.
“People would say ‘well, someone had to be first doing this — desegregating this campus,’ and I would respond ‘no, someone being first is not a guarantee.’ You can look around all kinds of institutions in Asheville, and any number of places and you don’t see it happening,” Jenkins-Mullen said.
While this change doesn’t come overnight, as evident by the hard work put in by the Mullens and Jameses as advocates and educators, according to Grier-James everyone can contribute to changing the world, simply by offering a kind word when they see someone in need.
“I want to issue a challenge to all of us. I want us all to think about where and how we live and what we do, who we touch,” Grier-James said. “My sister says anybody can offer a kind word, maybe you don’t have anything else to give, but you can offer a kind word.”
With the new name to honor the Mullens and Jameses, the Humanities Lecture Hall takes on a new metaphor, according to James. Instead of only being a place he and his colleagues, who contributed heavily to the humanities program, worked and taught, James said the lecture hall now represents the many people who supported his life and success.
“Right now I’m sitting in a building. It’s like deja vu. I keep wanting to say ‘take out four sheets of paper and your calculator. Don’t talk to the people beside of you.’ What I have to say about being here is this now has become another metaphor for me. Thank you,” James said.
Delete Image
Align Left
Align Center
Align Right
Align Left
Align Center
Delete Heading