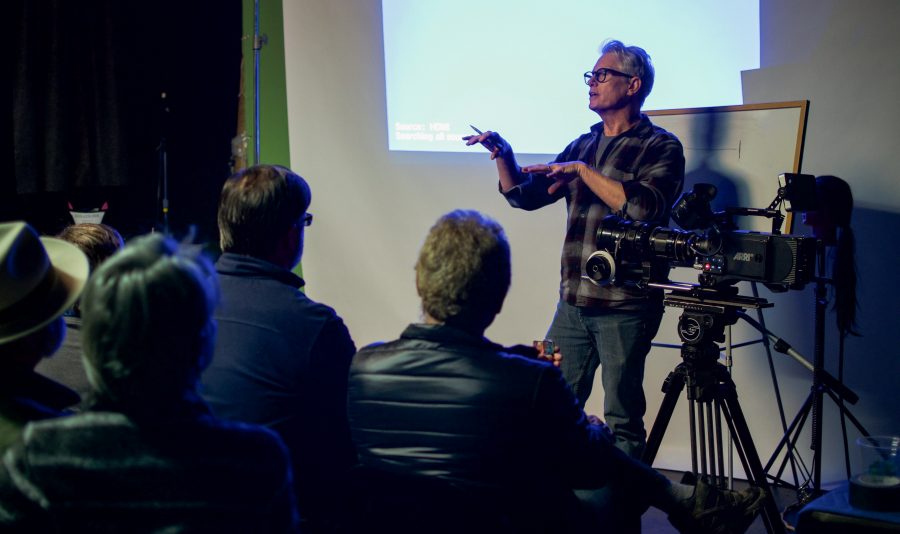 Brad Hoover, guest lecturer at the mixer, teaches the audience about the ins and outs of depth of field.

Emily-Ann Trautman
Assistant Photography Editor
[email protected]
Filmmakers, photographers, actors and movie-buffs gathered to network, share ideas and talk videography at the awaited monthly Asheville Filmmaker Mixer on Monday.
“The point is to get people that are interested in film, that work in film, that do film for fun. It’s a way to meet creative partners, hopefully and to have educational talks like tonight. So people have a reason to keep coming back because it’s fun and they can learn things,” said Ryan DuVal, a freelance software engineer and creator of AVLFilm.com.
This month, guest lecturer Brad Hoover, instructor at Asheville School of Film, taught the audience about the ins and outs of depth of field.


The mixer members were invited to engage in and ask questions throughout Hoover’s presentation. The laid back atmosphere invited good conversation and laughs while attendees brushed up on their skills.
“This is a good sort of first step to start getting into this world if you’re interested. There are a lot of media degrees out there and a lot of times no one knows where to begin and this is probably the first step, to me, for people to start working,” said James Suttles, operator of The Asheville Studio.
The filmmaker’s mixer, created by DuVal, is a collaboration between his FAQ site AVLFilm.com, Cat Fly Film Fest and The Asheville Studio and is constructed with no commercial interest in mind. Any and everyone is welcome to join. It will take place on the third Monday of every month at The Asheville Studio, Asheville’s self-proclaimed premier sound stage and studio rental. The Asheville Studio not only hosts local productions but those from out of town to such as HBO, Vice and HGTV.
“Cat Fly works in partnership with AVLFilm.com and The Asheville Studio to bring the mixer to the community. A huge part of Cat Fly’s non-profit mission is to uplift the local film community in Asheville and throughout the southeastern United States. So, we kind of all work together to bring people together every month,” said Brittany Jackson, programming director for Cat Fly Film Festival.
Cat Fly is a relatively new film festival which began locally in 2017. As a company, Cat Fly seeks to cultivate a spirited and gender-inclusive collective of dedicated, homegrown filmmakers who span across the southeast. According to Jackson, their role in the monthly mixer is to bringing the awareness to the film community.
AVLFilm.com is for the indie filmmaking community of Asheville and serves as an FAQ for the area. DuVal created the website when he had first relocated to Asheville and was unaware of those in the film community itself. After the North Carolina Film Commission was dissolved by the state, there was not a place where people within the film community could ask questions and collaborate with one another, Suttles said. AVLFilm.com serves as a hub to bring the film community together at a digital level that was previously unattainable.
“There wasn’t a community that was really tied together in Asheville. There’s a lot of like small cliques. And so this idea was born on the idea of maybe bringing all those cliques together. So if there was more of a true community, then that also helps people when they’re looking for work to know who to talk to. Just sort of builds up that networking,” Suttles said.
Each mixer averages around 50 to 70 guests. The sessions begin with a meet and greet, followed by an educational aspect, typically provided by a guest lecturer, then time to converse, network and participate in the mixer. After the presentation, attendees tend to migrate next door to share a beer at Highland Brewery. The first mixer began in September and will continue for as long as people will show up, Suttles said.
“This isn’t the first time there was something like this in Asheville, but the people starting them always had ulterior motives to a certain extent. It wasn’t purely about community so they kind of died off quickly. And this one, you know, as long as it stays true to the idea of being community oriented, people oriented, I think it will be a good one for a long time,” Suttles said.
Delete Image
Align Left
Align Center
Align Right
Align Left
Align Center
Delete Heading