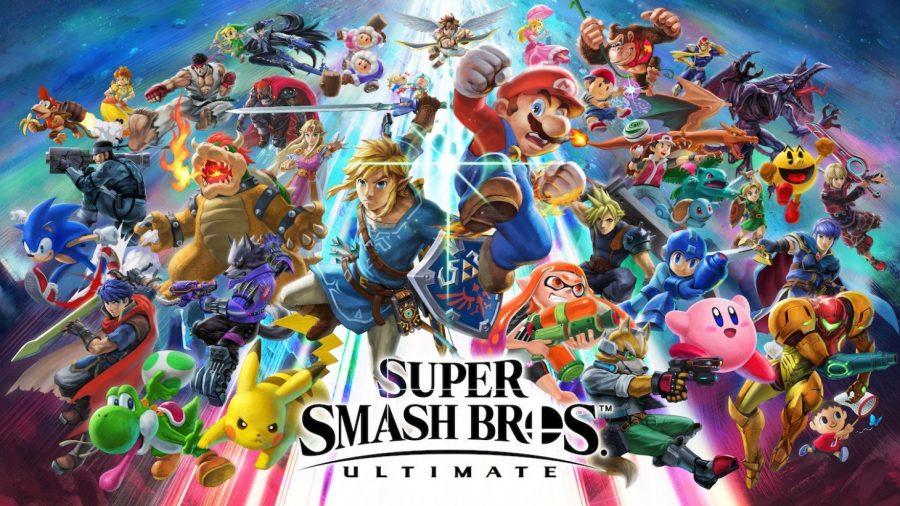 Every Monday, students gather together to play video games such as Super Smash Bros Ultimate.


Within a month of its release, Nintendo sold more than 12 million games, making it the fastest start for any title in Nintendo’s history.
With the successful release and praise the game received from fans, Smash Ultimate had some students at UNC Asheville excited to share their passion for the game with new people.
“We wanted to make a place where kinda nerdier kids could come and share their love of video games, while also participating in a fun competitive, environment,” said Vice President of Smash club Aaron Nasser.
The club meets in Zaiger Hall every Monday at 6:30 p.m. but players usually arrive earlier to begin warming up and playing friendly matches. Six TVs are set up throughout the room, five for Smash Ultimate and one with a Playstation used to play other fighting games.
“We like to make sure that everyone is having fun, but there’s definitely a tone change in the room when the tournaments begin, people get serious about this,” Nasser said
The club has a few announcements and begins a tournament usually with about 15-20 people. The style of tournament (either one on one or two on two) is chosen democratically the previous week.
Players can choose from 74 characters from different Nintendo games like Pokemon or Super Mario Bros., each with different abilities and special moves that are used to fling the opponent off screen. Players must take into account how different abilities interact and different map types can help them win along with pure button-pressing skill.
“I’ve met so many people and accomplished so many things all because of video games,” said Smash club Treasurer Joseph Gaiten.
Most club members have experience with numerous other video games including other fighting games, first-person shooters and multiplayer online battle arena games. Beyond just playing these games the club members enjoy following the professional gaming or “Esports” scenes for popular games like Smash, Overwatch and Dota 2
Smash Ultimate comes as the sixth game in the fighting games series, each game being an updated version of the previous game for the current Nintendo console. Smash as a franchise cultivated a competitive video game scene with each release, with Super Smash Brothers: Melee considered to have the largest professional scene and the most dedicated following.
Melee was released in 2001 but still continues to be one of the most popular competitive video games, peaking at nearly 200 thousand viewers on Twitch as fans watched who would win the grand prize at EVO 2018, the largest fighting game tournament.
“Melee is an incredible game but it isn’t very good for beginners because it costs so much to play on old technology,” said founding member of the club, Brennen Shaughnessy. “I’m glad that Nintendo have come out with a game that is more tech oriented with a high skill ceiling while also able to be enjoyed by casual players.
Nintendo has made changes to their Esports priorities due to this barrier of entry for Melee. EVO 2019 will not feature a Melee tournament but instead only have Smash Ultimate to the dismay of many fans. Many of the Smash club members believe that Melee will make a return to EVO in 2020 and that Ultimate will only serve to make both games more popular.
Starting a college organization based around competitive gaming isn’t an isolated idea, but a trend across America with a lot of money up for grabs. According to Wired Magazine, 200 U.S. colleges are awarding $15 million worth of scholarships to collegiate Esports athletes during 2019.
Esports is set to grow even more in the future. By 2022 it is projected that Esports revenue will surpass $1.7 billion. Professional gaming teams and leagues have recently becoming geolocated and marketed in large cities similar to traditional sports teams.
The first-person shooter Overwatch has established the “Overwatch League” which has 20 teams representing cities throughout the world including Dallas, Texas, Toronto, London, Seoul and Shanghai.
The Super Smash Bros club members are excited by this massive growth in Esports. Professional gaming is now seen as a legitimate and impressive business which in turn brings more legitimacy to the fans who enjoy watching.
“A lot of people look down on video games as a waste,” Shaughnessy said. “But there is just as much manual dexterity and mental dexterity as traditional sports and I think people are starting to realize this.”
Delete Image
Align Left
Align Center
Align Right
Align Left
Align Center
Delete Heading