A good man will never make up for his monstrous past 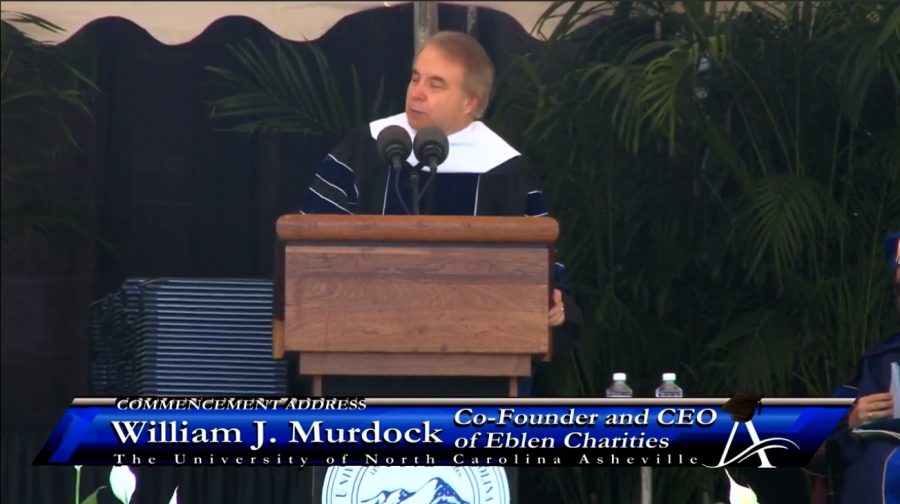 William J. Murdock, co-founder of Eblen Charities speaking at UNCA's commencement in 2018 where he received an honorary degree. Photo provided by UNC Asheville

Maggie Haddock
Contributor
[email protected]
There I was, a bright and ambitious high schooler. I was a straight A student with a knack for being the teacher’s pet, so I was excited to take a class with the most beloved teacher at my high school.
He greeted every student who walked past his classroom during class change. Each student of his was known by a quirky nickname he assigned to them. His approach to teaching was to have absolutely no tests, but lots of fun.
I was 15. Like most 15-year-olds, I probably could not state a clear definition of sex, much less grooming, molestation or sexual exploitation. So when this beloved teacher began making sexual advances toward me, I didn’t know what to do, I just knew it wasn’t right.
He would give me baked goods from a local bakery in front of the class. Very quickly, he managed to isolate me from my peers. It was clear our dynamic was different and other students despised me for academic praise and favoritism I surely did not deserve.
I began to hate that class. I tried not to speak. The sick, glazed-over gaze and loving response to every word that left my mouth made me want to rip my throat out and suture my lips together. I feared him, but I also feared the stigmatized belief that the control over this man’s behavior was mine and not his.
I constantly felt like I was in a game of chess: for every move I made to escape him, he would make sure I could not avoid capture. When I stopped speaking in class, he would only ask me questions through the entire class period. When I made a point to leave class first, he would find a reason to need to speak to me after class. It was a sick game I was made to play and I wanted nothing more than to quit.


On one particular occasion that will forever scar my memory, he cornered me in the empty classroom. He cooed and borderline drooled as he shut the door and approached me. His firm hand on my shoulder, a further imprisoning grasp was only escaped by a quick decision to fight and run away.
Among the grooming and both physical and social isolation, I couldn’t quite bring myself to go to other teachers, administrators or even my mother. My teacher was a steadying force in the community. He was charitable. He volunteered, helping the disabled community. He had not one ill word against him. It is that type of profile that makes a great educator, a role model and an inspiration for students and faculty alike.
So when I wanted to speak out against him, I didn’t know who would believe me. After all, he was such a good man and good men do not touch children.
Recently, William J. Murdock, executive director of Asheville’s own Eblen Charities returned an honorary degree he received in 2018 from UNC Asheville. The decision was in response to renewed concerns regarding a sexual offense charge from 1988.
Murdock pled guilty to taking indecent liberties with a child under 16 years of age. His victim was a student and the charges were filed when the young girl was 15.
Last Wednesday, a CNN investigative report outlined the testimonies of his victim, now 47-year-old Shelley Love Baldwin, and her family who recounted certain events.
Murdock was Baldwin’s teacher when she was in the eighth grade. The abuse started quickly: the overt physical contact in class. Then it turned into grooming, then isolation. He lent her his jacket. He held her hand before her mother picked her up from school. A young Baldwin knew even then there was something wrong, but when children are taught to respect adults, how can they articulate that some power dynamics seem uncouth?
Let me make this clear: my teacher never hurt me the way Murdock allegedly hurt Baldwin. While there was unwanted and inappropriate physical contact and a reasonably uncomfortable dialogue between us most of the time, I never experienced abuse to the level of Baldwin. But these are not the trauma Olympics and adults simply should not touch children.
In 2017, the Board of Trustees chose Murdock as a recipient for an honorary degree. With stirring concerns due to his criminal history, an investigation ensued: a few brief conversations to allow Murdock to explain what happened. Murdock said it was a made up claim pushed by Baldwin’s mother. The Board of Trustees accepted this answer as sufficient.
But Murdock had a criminal conviction against him. Yet on the basis of his charitable past, the Board was able to overlook the charges. They were willing to hear a one-sided testimony and stop there.
Last Wednesday, the Chancellor’s Office released a statement clarifying the honorary degree selection process and ensuring they are working to refine these procedures. Lifetime achievements, they said, are weighed against the candidate’s leadership contributions over time based on available information.
Any person is capable of committing bad deeds, even good, charitable men. But outweighing pedophilia, especially that backed by criminal charges, is immeasurable against any selfless act.
The events of the past month and the investigative report released by CNN last week rekindled the ache I have for my 15-year-old self. I read about Murdock and see the face of my teacher, and my own young face to Baldwin, respectively. I am reliving trauma at my university that I very intentionally left in my hometown when I moved away.
I do not return to my high school, nor do I linger around the parts of my hometown where my previous teacher works or volunteers. But, I know he is still doing admirable things in that community, a community that will weigh his years of good deeds over my lifetime of trauma.
I would like to believe Baldwin and I are anomalies in an otherwise spotless school system and supportive community. But when high administrative staff overlook pedophilia, I don’t know what chance survivors, children or otherwise, have in the world.
Delete Image
Align Left
Align Center
Align Right
Align Left
Align Center
Delete Heading