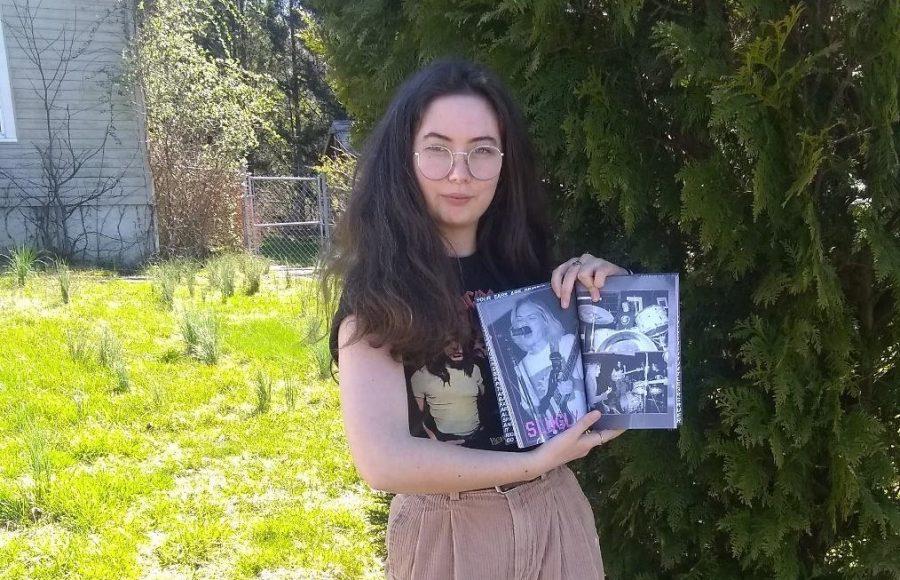 Jackson Cole
Contributor
[email protected]
The sinking evening sun drips into High Five coffee shop on Broadway in North Asheville as alternative rock glides through the speakers and weaves between awkward pauses in conversations.
The small coffee bar hosts all sorts of folks immersed in their laptops, books or phones. Within a secluded corner of the shop behind one laptop decked out with an assortment of band and music stickers sits a high school senior working diligently.
She sports an orange juice-colored tie-dye T-shirt which once bore Myrtle Beach across the chest, faded blue jeans, a pair of fuchsia Converse and large circular glasses that take up much of her face. Long black hair parted down the middle slightly frizzed out and a Yerba Mate held tightly in her hands, Audrey Walsh would seemingly appear to be another high schooler working on homework for pre-calculus, world history or an AP literature class.
Walsh does none of the above, instead she quickly transcribes an interview for a project of her own. The interview she transcribes will be featured in the next issue of her magazine, Melted, a music-based publication covering local bands in Asheville as well as other cities throughout the country. Her work features pictures and interviews with local bands such as Indigo de Souza and MJ Lenderman to bigger names such as Deerhunter and Mitski.
A senior at Asheville High School and within the School of Inquiry and Life Sciences program,Walsh balances school and working on Melted with reasonable ease. Recently, Walsh toured with local band Tongues of Fire and was able to take an educational leave of absence from classes.
Walsh and Al Smith, a 20-year-old studio art major at the University of Arizona, created Melted when Smith was a sophomore in high school and Walsh was a freshman. Throughout the magazine’s existence, Walsh and Smith worked on the magazine from separate cities across the U.S. Walsh lived in Asheville while Smith moved from Silver Springs, Maryland, to Alburquerque, New Mexico and now to Tuscan, Arizona, according to Walsh.


“I met her because both of us were young photographers on Instagram and we both had a very similar style,” Walsh said.
Melted originally focused on art. Over time, both Walsh and Smith moved toward covering music and the music scenes present in each of their respective cities. Working on the magazine was an outlet for Smith during her high school years, serving as a retreat from the woes of attending a Catholic school as well as the anger and sadness she felt during her time there.
“I’m thankful for the high school environment I had because it pushed me to question myself and everyone around me,” Smith said.
For Walsh, working on the magazine and being in high school created a schism in the two spaces, creating feelings of both being an adult yet simultaneously recognizing she’s still in high school.
“When I’m in a high school environment I feel a lot different than when I was on tour, like an adult, but when I’m sitting in a high school class I feel so much younger,” Walsh said. “More specifically, when I’m at high school parties I feel like such an outsider because I’m looking at it and this isn’t really me.”
Working on the magazine offered Walsh new ways to enjoy her time in high school, ways which differ from the narrative of what a typical high schooler should experience including participating in drugs and alcohol.
“Having this aspect of other things that I can do that have the partying energy to them, like going to shows and technically working at them but still having fun in a wholesome way has given me the experiences of enjoying yourself as a kid, but at the same time I felt like I had a place,” Walsh said.
Working on Melted boosts Walsh’s confidence in interacting with others and encourages her to push herself outside of her comfort zone, Walsh said.
“I’ve been in so many places where I’ve seen a musician that I think is so cool and I listen to them and I have the opportunity to meet them, especially Angel Olsen,” Walsh grinned. “I remember seeing her at the bar at the Mothlight and being like ‘OH MY GOD, it’s Angel Olsen I can’t believe it!’ But then thinking that I have to talk her, I have to do this for the magazine but I also want to meet her. I felt that nervousness, I identified it, but I pushed on anyway.”
Walsh’s work on Melted and entry into the local music scene sets an example for and inspires her younger brother, Aiden, a freshman at Asheville High School. In addition to being siblings, they possess a strong friendship as well, according to Walsh.
“I’m a musician. I like going to shows in general so it’s been an opportunity to meet some musicians and just kind of explore the music scene a little more,” Aiden Walsh said.
Both siblings will be attending the Melted music festival on April 20 at Static Age Records with bands such as Tongues of Fire and Kitty Tsunami performing.
While Smith will not attend the festival due to conflicts with her college, she’ll be present at  another Melted festival this summer in Nashville.
“Melted  is a way for me to connect to the music and the people making it. I’ve met so many incredible people through this and have had the opportunities to feel alive. Melted  has given me the opportunity to feel alive,” Smith said.
Delete Image
Align Left
Align Center
Align Right
Align Left
Align Center
Delete Heading