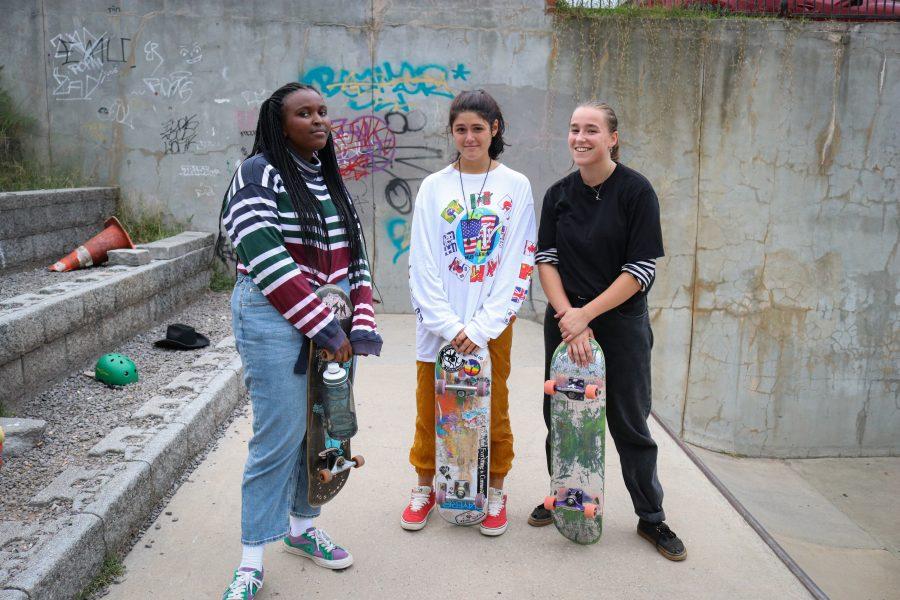 Alex Mbuthia, Maria Gabriela Gelp and Mariana Kuehn all skate together weekly at the Foodlion skatepark.

Joe Lehrman
Assistant Sports Editor
[email protected]
UNC Asheville hosts 16 different men’s and women’s Division I sports, with generous donations from alumni and funding from the athletic department sufficient for any mid-major NCAA school. But most students will never benefit from the privileges afforded to a student athlete: the clothes, the facilities or coaches that help them improve. The majority must find their own avenues to connect to one another and have fun.
Skateboarding, for some, provides the opportunity for competition and exercise that team sports could never satisfy. Like any practiced skill, skating has a tremendous amount of nuance and variation, and much like the attitude portrayed in TV and film, a skater tends not to be pinned down by one institution.
“I always like the idea of it. Going fast and doing crazy stuff,” said frequent skater Tim Childers. “It’s a good outlet for energy. The thing that drew me away from sports to skating was  it’s free form and you decide what you do each day and what your limits are.”
Childers had been skating periodically since he received his first board as a gift when he was 5 years old. When he began high school he got a new street board, and began to hang out at his local skate park. He makes a trip to Food Lion skatepark two to three times a week.
He always has a goal in mind to practice before he goes to the park. This goal could be broad but he knows that he wants to try new tricks, create some of his own or practice the ones he already knows.
“I find that a lot of people start skating for similar reasons or they had already been doing some sort of board sport, and you can make that transition really easily,” he said.
Skateboarding can be  a sport, a recreational activity, an art form, a job or simply a means of transportation. 11 million people around the world self-reported they skated regularly in 2009, according to Skatereview.com. But what it means to skate on a regular basis is different to each person, as some may prefer to just ride to class instead of pulling off tricks at the skatepark.
Within two miles of the university, there are two skate shops and the most popular park for students, Food Lion. The park was named for the grocery chain that formerly funded the public park. Even after the sponsorship ended, the name stuck and now every skater in Asheville knows that you’re not going to buy food when you go to Food Lion.
Asheville has two other skate parks, Foundation and RAD skateparks in the River Arts District. UNCA students gravitate towards Food Lion because of its prime location Downtown.


Asheville is known as a city that attracts counter-culture and thrill seekers looking for a mountain experience, traits shared with most skaters. It would be quite common to walk to Downtown or UNCA’s campus and see multiple people zipping around. But with an abundance of skaters come rules to contain them.
Childers describes these city ordinances as the “Four Wheels Down” law. Skaters are allowed to skate on the street and at designated areas but can’t jump onto property or sidewalks to prevent wear and tear. This is true for campus skaters also, except there are no designated places to skate.
The lack of skating territory has caused students to take matters into their own hands and organize. A self-proclaimed sisterhood of skaters has formed “Bitchslap” a group of mostly girls that meets behind Founders Hall, weather permitting, every Monday at 6 p.m. They have dubbed the small concrete area “the Slab” where they gather before making a group trip to Food Lion.
This naming of a skating area was only a consequence of what the ladies of Bitchslap have planned for the group. The forerunners of this group, Alex Mbuthia and Mariana Kuehn, have taken it upon themselves to introduce girls to skateboarding.
“A lot of the girls in this group don’t know how to skate. We want to get rid of the stigma around girl skaters and bring the skate culture into feminism,” Kuehn said. “We often get told that girls can’t skate. It’s harder for us to get recognition or learn where to start. None of us are particularly good so we are just here as a support system, to encourage and make people feel comfortable.”
About 20 girls make up Bitchslap, each varying in skill and background in board sports. A few of the girls say they were inspired to join after seeing Kuehn skate around campus. Others just want to improve their own skills.
“This group is not just for girls,” said Mbuthia, “We want everyone of all genders to be able to learn about skating. Everyone is welcome.”
While women aren’t as represented in skating culture, the idea of inclusivity and eliminating stigmas about their sport are universal. The care-free attitude is shared by skaters in Asheville.
“It’s dangerous. It’s physically challenging to be a part of. But it’s empowering to learn a new trick– just to fall and get back up until you get it right.” Kuehn said before she and her crew of skaters headed off to Food Lion.
Delete Image
Align Left
Align Center
Align Right
Align Left
Align Center
Delete Heading