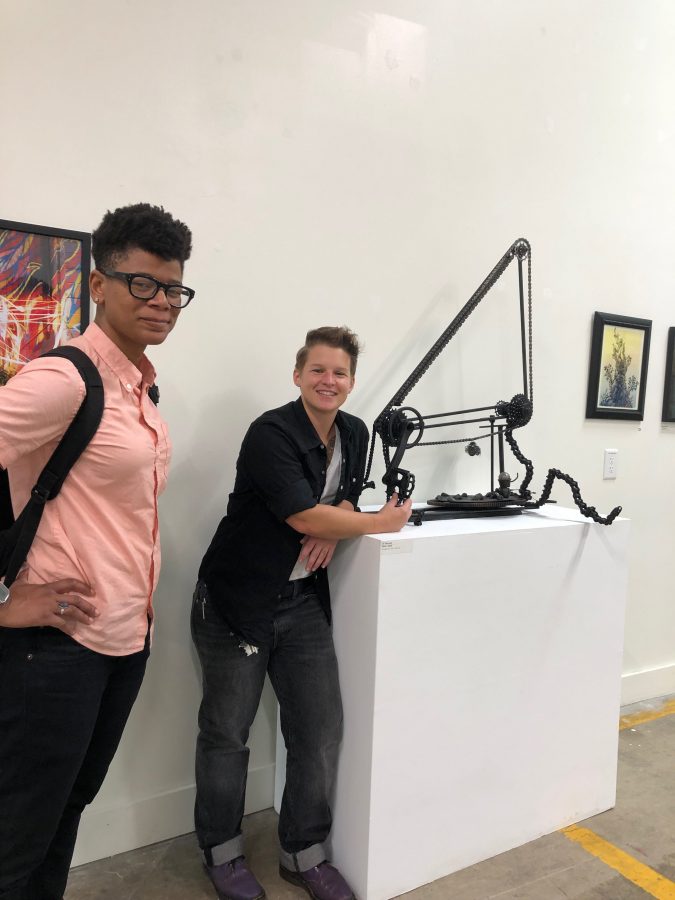 
Bonnie Macalister
Arts & Features Staff Writer
[email protected]
Liz Williams and Al Murray remind us through their art we can rise up to our potential while showing off our roots.
Southern Equality Studios creates a way for the Campaign for Southern Equality to bring the arts into the conversation of the LGBTQ+ community in the South. Liz Williams, this year’s artist in residence for SES, and Al Murray, director of engagement and organizational development, worked together during the summer on “Up/Rooted”. Their hope for this project entails representing people who may not always be shown in other galleries and have a conversation about what it truly means to be an artist in the South who identifies as LGBTQ+.
“It’s really easy to be introverted when you’re an artist because you’re in your space and with your work and you don’t have to interact with people,” said Williams, local artist and co-creator of “Up/Rooted.”
Williams uses her photography skills, along with Photoshop, to show artists in their safe spaces with their inspirations. Her own inspiration for the photo series contribution to “Up/Rooted” came from Murray’s idea of visiting roots. Williams wanted them to feel uplifted from their past, while also paying homage of the places and experiences that made these artists grow.
The photo series shows artists literally levitating in their safe spaces, a concept that Williams based on a recurring dream she had as a high schooler of herself levitating, feeling safe and special.
“When I was waking up I was going to school as a high schooler and just feeling a little other than and maybe a little out of place, I wanted to bring those roots and incorporate it to the portraits of people,” Williams said.
Those roots reflect her own experiences of being shy and introverted. Williams would often go to her own safe space and focus on her illustrations, but through photography, she explored outside of her comfort zone. Her work in this series allowed her to branch out and connect with people in a way that let her grow as an artist and a person.
“You have to get uncomfortable to go to the next level. I’m really excited I had that ability with this series because while going to people’s different locations. I’m being inspired,” she said.
What inspires Al Murray, the other half of this dynamic art duo, was taking key elements from their childhood in the South. They took objects and images from their roots and other artist’s roots, and created a series of kinetic sculptures. These sculptures serve as a way to allow people to further connect with them and find their own story within them.
“I think it’s really important that we, especially southerners, tell a story about southern queer artists because there is so much of a narrative that is created about us that is not for us,” Murray said.
That narrative focuses on poverty and struggle of LGBTQ+ artists in the South. Murray said this exhibition tells the real narrative, one created by real southern artists. The new narrative they want to show highlights the importance of lifting up these artists and showing their passions.
“We are resource-rich, we have stories and storytellers, we have passions, we have hearts and we have futures that we deserve to talk about,” Murray said.
The work that Murray and Williams have done for “Up/Rooted” creates an opportunity for queer southern artists to tell their story. The art displayed comes from a mixture of influences of artists from all mediums. Murray describes this mixture of influence as a collage of their collective southern, queer roots. All of this to tell a combined story rising up in their passion for art and remembering their past.
“That story is the story that keeps someone going if they’re in a tough spot and they don’t feel seen. Being able to look at a portrait that Liz does lifting somebody up in their safe space means that’s possible, and if something’s possible then you can keep going,” Murray said.
“Up/Rooted” can be found at Revolve Gallery until Sept 3. Revolve is the physical space for the Asheville non-profit organization, the Media Arts Project, and is located inside of RAMP SOUTH Studio.
“The key thing is for folks to be able to have opportunities and have spaces and to see themselves reflected in those spaces,” said Colby Caldwell, co-founder and programs director for Revolve. “We believe as an organization that our community is better served and richer because of a variety of different voices that are not always seen in the gallery scene here or heard within in the gallery scene.”
Colby Caldwell, along with Exhibitions Director Anna Helgeson, work to represent a variety of artists at Revolve. They do this by working with other organizations in and around the Asheville area, including the Campaign for Southern Equality and OurVOICE. They strive to ensure that all voices and ideas have a space in Asheville, especially for artists of color and non-gendered artists who have different outlooks and experiences.
Delete Image
Align Left
Align Center
Align Right
Align Left
Align Center
Delete Heading