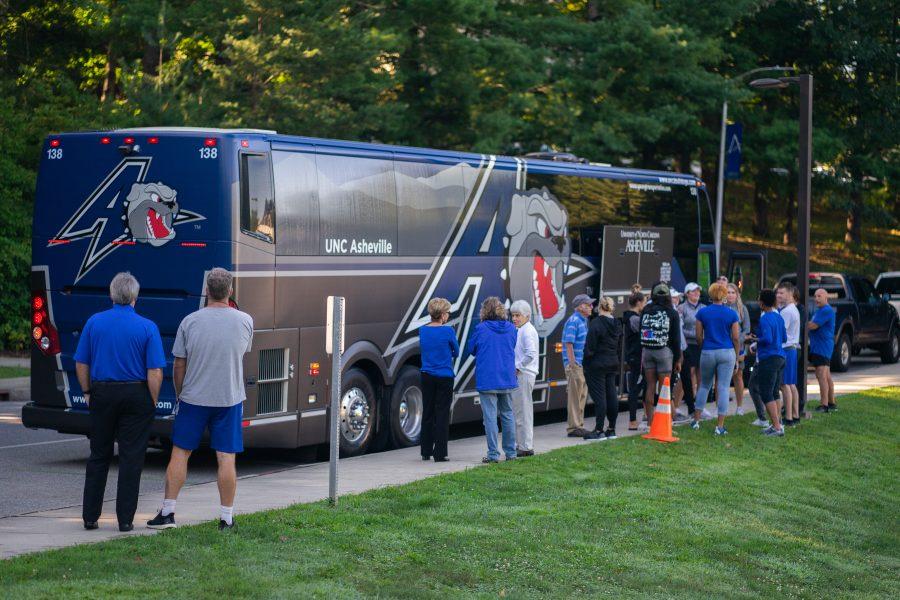 The athletic department gathers around the new wrapped bus, as the soccer team packs up for the maiden voyage to face Navy.

Joe Lehrman
Assistant Sports Editor
[email protected]
The UNC Asheville men’s soccer team began their 2019 season traveling by bus to play the Naval Academy Midshipmen in a non-conference bout. This departure signifies not only the beginning of the season, but also the unveiling of the athletic departments new UNCA branded charter bus that will be used for travel by all the sports teams.
On Thursday Aug. 29, the athletic department gathered to witness the reveal of the new charter bus. In attendance was a good portion of the players and coaches from different sports, Athletic Director Janet Cone, accompanied by her staff and Chancellor Nancy Cable. They stood in front of the Justice Center as the men’s soccer team loaded up the bus and shipped off to Annapolis.


“When I saw the bus for the first time I honestly teared up a little bit, and I don’t cry very often,” said Women’s Basketball Head Coach Brenda Kirkpatrick Brown in a press release given by the university. “The driving support behind a project like this and any enhancement to our programs comes from people like Lou and Sally Stein who get a behind the scenes look into how amazing our student-athletes are and they want to get on board and help. We are so grateful that they wanted to contribute in a way that not only increases the visibility of our athletic program but also shows our student-athletes that how we travel matters. We are all working hard to make every aspect of the student-athlete experience first class at UNC Asheville.”
The charter bus was designed in conjunction with Young Transportation, an Asheville based transportation service that has regularly driven UNCA sports teams to competitions. The bus features both bulldog logos, silhouettes of surrounding mountains and the Young Transportation logo.
The wrap of the bus was provided by donors Dr. Louis and Sally Stein. The bus will be added to the regular Young fleet of buses, allowing it to promote the university throughout the state.
“A heartfelt thank you to our loyal Bulldog friends, Louis and Sally Stein and Young Transportation for providing us with a branded bus,” Cone said. “Providing safe and reliable transportation and a first-class student-athlete experience are both important priorities for Bulldog Athletics. Having our teams travel across the state and beyond on this bus is a great way to promote UNC Asheville and foster school pride, too.”
The new branded bus is not the only change within the athletic department this year. Many of the sports teams have added a great deal of coaching changes and new players players to their rosters over the summer offseason.

Perhaps the most drastic change was the men’s baseball team, who suffered the loss of 14 players and volunteer assistant coach, Pete Guy, over the summer. Coinciding with these lost players, the coaching staff recruited 17 new players to join the Bulldogs for the 2020 season. Six of the new players are transfers from junior colleges, a recruiting tactic that many Division I schools employ to add experience and talent to their rosters. The team also added Brad Jarreau as the new volunteer assistant coach.
Greenwood Field is also continuing to undergo renovations before the 2020 baseball season. In addition to the new netting and outfield wall installed last year, the baseball team will demolish the old dugouts and add larger dugouts in the coming months.
The women’s soccer team also experienced a great deal of turnover following their 2018 season. In April, Clifton Bush was hired as the new head coach following a record of 3-9-4. During the 2018 season, Bush was already an assistant coach on the team, working mostly as goalkeeper coach, and was promoted to head coach following a nationwide search.
With the addition of Bush comes two new assistant coaches, Molly Dwyer and Davis Fox, as well as a freshman class that boast 11 new players. The women’s soccer team has started the season 1-2, the lone win coming from a thrilling overtime win against ETSU. The game was tied 0-0 going into the final four minutes of overtime before Junior Skyler Chillson scored the golden goal, giving Bush his first win as head coach.
“At this point I don’t quite know if I have words for it. This is a quality team that we just played today and going into overtime shows how tough of an opponent that is. Were we ready this early to get a result on the road versus such a quality opponent like ETSU? I think those are the things that I don’t know if I have enough to put into words yet,” Bush said in a statement after the game.
Other notable additions to the athletic rosters at UNCA are new men’s basketball assistant coaches Mike Venezia, Neil Dixon and Woody Taylor, who hope to improve upon the disappointing record of 4-27 set by the Bulldogs last season.
Delete Image
Align Left
Align Center
Align Right
Align Left
Align Center
Delete Heading