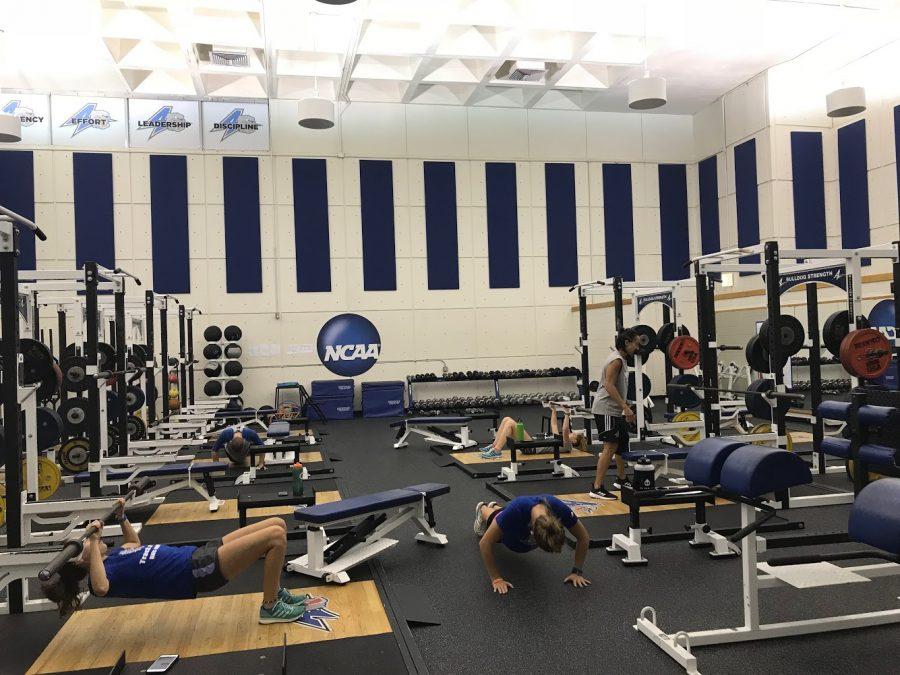 Kenzie McDowell
Sports Writer
[email protected]
UNCA and Mission Sports Medicine work together as a way to ensure quality care for their athletes. The athletic training staff’s work is defined by UNCA’s website as the enhancing of student athlete experiences and patient outcomes, making the wellbeing of these athletes their top priority.
UNCA characterises their athletic trainers in positive ways, stating that they provide “cutting-edge care in injury evaluation, management, and rehabilitation” so these athletes are able to return quickly and safely to their given sport. In addition to this, they “maximize performance” through emphasis on the improvement of strength, conditioning, and overall wellness so these athletes are able to effectively prepare themselves and lower the risk of injury going forward.


“As an athletic trainer, my responsibilities include the health and wellbeing of our student athletes here on campus,” Athletic Trainer Nick Fischer said. “Anything and everything that surrounds a student athletes healthcare. Examples include injury prevention, health education, on-field care, hydration, nutrition, emergency care, injury evaluation and triage, and rehabilitation of an injury. We are basically at the center of the sports medicine web with the student athlete to guide them with their healthcare needs if they become ill or injured during their time at UNCA.”
Nick Fischer is one of five athletic trainers at UNCA. The other four trainers that manage teams for UNCA include Eliza Parker, Tim White, Justin Byland, and Kelly Montague. Fischer is responsible for the care of women’s soccer and baseball; Parker cares for track & field, men’s and women’s cross country, swimming and diving, and part-time for volleyball and golf; White cares for men’s basketball and part-time for volleyball and golf; Byland cares for women’s basketball, men’s and women’s tennis; Montague cares for any athletes that need it by appointment.
Since each sport is divided among the trainers, they are able to seek out individual help and assistance that is catered to their particular sport. UNCA provides athletes with the reassurance that these athletic trainers understand the impact an injury can have on them and their “competitive career”.
“When a student athlete is struggling with an injury, they are putting in all the time and doing all the right things, but they are limited and constrained to certain physiological processes during their rehab,” Fischer said. “Some rehabilitation protocols can take anywhere from six to nine months, so it is a lot of commitment to healing, it is also a lot of time away from doing something that they love and enjoy.”
Fischer said that caring for an athlete with an injury is one of the most difficult parts of being an athletic trainer, due to the fact that it can be extremely prohibiting and disappointing for the given athlete. This is also what makes being a trainer so rewarding as well because he is able to assist them toward achieving success in the sport they love.
Parker related similarly to Fischer, saying that the ultimate motivation for her as an athletic trainer is being able to watch these athletes enjoy their time as an athlete and allow them to be as successful as possible.
“You need to be sure you have a passion for athletic training,” Fischer said. “Like every other job there is the good and the bad, be sure that you are in it for the right reasons because that is what will keep you going through grad school and 5 to 10 years down the road.  Athletic training has a lot of attrition, so having that reason for picking this career is big.”
Both athletic trainers, Fischer and Parker, have had histories as athletes prior to their jobs as athletic trainers. Both Fischer and Parker said that this played a huge role in their decision to become involved in sports medicine and ultimately contributed to their familiarity with the field in general.
“I originally wanted to go to physical therapy school, but I did an internship and it was not for me so I decided to stay as an athletic trainer,” Parker said. “I was an athlete and I dealt with eating disorders, so I wanted to help other women with this.”
These trainers not only work with UNCA’s student athletes, but they also work with those that are interested in pursuing athletic training as well. Intern Will Moore attends Western Carolina University and is hoping to involve himself in a career in sports medicine. As a part of his education in this field, he is currently assisting UNCA’s athletic training staff as a way to gain experience and credits he needs for the future.
“I love being able to help people feel well enough to do the things they love,” Moore said.
Moore said he helps with whatever tasks he is able to around the training room and with the sports teams. He generally shadows and assists Fischer but is given other opportunities to help the staff when needed.
“Being here has been extremely beneficial so far and I believe it will help me to continue to broaden my experience and become a better Athletic Trainer,” Moore said.
Delete Image
Align Left
Align Center
Align Right
Align Left
Align Center
Delete Heading