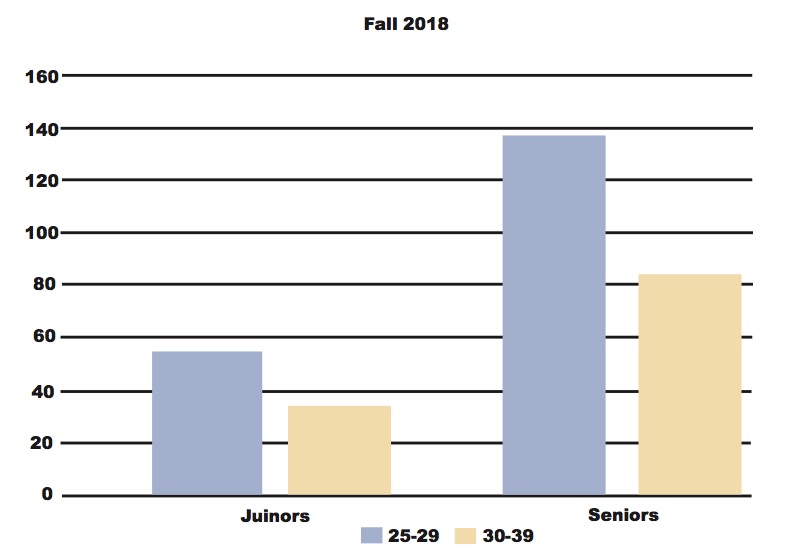 Graphs represent decline in students ages 25-39 at UNC Asheville between fall 2010 and fall 2018.


UNC Asheville increased tuition fees by 36% since 2010 a non-traditional student population continues to plummet, according to university numbers.
“I was run ragged trying to work enough to afford UNCA while also succeeding as a student,” said former UNCA student Lauren Handy.
Handy said financial pressures may explain why university numbers show a decline in non-traditional student population since 2010. University figures show enrollment of juniors ages 25-29 decreased by 25% and student in their senior year decreased by 14%. The population of students ages 30-39 in their junior year decreased by 44% and those in their senior year decreased by 24%.
“A lot of people have families now in that age range, so they aren’t able to gamble thousands of bucks on a degree that might not even land them a job for 10 years,” musician and former non-traditional student Lea Anna Bright said.
Bright said non-traditional enrollment decrease may be attributed to trade jobs growing in popularity. She said earning a trade degree may promise more financial security and job opportunities than going into debt to earn a degree in an oversaturated field.
“Many people never manage to afford college. It’s insanely expensive to attend a university. It’s no secret that the cost of college is steadily rising while job markets are slowly narrowing,” Handy said.
She said many people may go straight to a university out of high school, or don’t go at all.
“I feel there is a perception among many millennials that there will not be any jobs available for a graduate directly out of college in the current economic climate,” Katelind Smith said, a UNCA sociology graduate.
Smith, 27, said her journey through her undergraduate degree came to an abrupt halt when she had her daughter. She said this delayed her graduation by a semester and realized a four-year degree wouldn’t provide her with adequate job opportunities to support her daughter and family.
She works hard to keep her household financially sound, simultaneously taking care of her daughter and searching for steady career opportunities, which require a graduate degree.
“I have decided to go back to obtain my graduate degree six years after. Completing my undergraduate degree, due to lack of access to higher paying positions,” Smith said. “I have worked various jobs, making under a living wage since I graduated in 2013 and I am hoping with a professional degree in social work, that I will be able to have a steady career as a medical social worker and have access to higher paying jobs.”
Musician and guitar repair technician Ashli Rose Bales, 28, said she declined acceptance to Ringing College of Art and Design in Sarasota because she couldn’t imagine living buried under $160,000 of student loan debt.
“At the time of my acceptance, I was an art major for 3D design at Northwest Florida State, but I didn’t go because I decided being $160,000 in debt was not a way I wanted to suffer for my art.”
While attaining an associate of arts at Northwest Florida State, Bales performed her music at local bars seven nights a week, worked at a local music store and studied guitar repair as an apprentice to keep her finances in check during college. She said her busy and demanding life limited her schedule, allowing her room for only three classes a semester while having time to make money.
Bales said she sympathizes with those who abstain from a four-year education, having achieved success through her grass-roots entrepreneurial spirit. She said going into mounds of debt for a traditional college degree may not necessary in current society and she doesn’t plan to continue her education.
“I absolutely don’t plan on going back to school. I plan on continuing to perform, and with over 10 years of experience in instrument repair, my next step is to spend another 10 years doing the same, and eventually open a private shop and take on an apprentice of my own,” Bales said. “Not a lot of people can do what I do, and do it well.”
Bales said she continues to repair stringed instruments and renovate vintage guitars under the name ‘Guitar Witch Repairs’, living a successful and debt-free life. She said her family cannot afford daycare and paying $5,000 a semester would be impossible if she decided to attend UNCA.
Handy said her experience at UNCA drained her financially and the age gap between Handy and her classmates felt socially isolating.
“There are two types of people: People who’s parents are paying for their college, or people who must pay for college on their own. People who’s parents are paying have the ability to go straight to UNCA. These are the students who are younger,” Handy said. “The students who are paying for their education themselves, likely don’t go straight to UNCA. They did as I did and go to a community college to start, and then move on to a university when they can. This creates the age gap.”
She postponed college enrollment for financial reasons, draining her personal savings account on only four credit hours. Handy said applying for loans before at 24 would force her to base the loans off of her parent’s income, which wasn’t an option.
“Because I was responsible for funding my own schooling, the process of going was slow and drawn out,” Handy said. “I never realized just how unattainable a degree at UNCA was for me until I was faced with the reality of it.”
Abigail Leech, 26, currently attends Asheville Buncombe Technical College and plans to transfer to Western Carolina University to study forensic science. She briefly attended UNCA in 2011 for less than a semester, and realized she wasn’t ready. Leech said she appreciates her decision to complete her degree at an older age because she now knows where her interests lie and how to use her time and money wisely.

“I decided it was best I didn’t stay in college wasting my parent’s money and I would either never go back to college or someday find my calling,” Leech said.

She said the decline in UNCA students ages 25-40 stems from people struggling to pay the hefty tuition fees or waiting until they feel truly prepared for college.

Branding and marketing consultant Kendra Penland, 42, said she questioned her career path after two years of college and found success in the food and beverage industry. Penland said after the birth of her first child, she realized service industry’s long hours weren’t congruent with raising a baby and decided to complete her education at WCU at age 25.

“So, six weeks after I had my son, I started back to higher education,” Penland said.
She said campus life targets traditional college-age students, creating a divide and weak connection between older students and their alma mater.
“Social programming for students who are 25 and older might be something that would connect with prospective students and make a difference in their decisions,” Penland said.
She said the high cost of tuition at UNCA, limited class schedules, types of degrees offered and the university’s non-central location may not adhere to student’s needs while working to stay financially afloat. Penland said tuition at UNCA is extremely unaffordable and unrealistic for her while she raises her children.
“I think the decrease in percentage of older people going back to school has much to do with the cost of living increasing and being able to afford going back to school as well as overall debt ratio being further compromised by having to utilize student loans,” Smith said.
Smith said new parents may struggle to afford child care while attending classes in addition to tuition payments and accommodating increased housing prices in Asheville.
“Societally, I think a lot of older folks, especially in this city, don’t have the time or money to pursue higher education because the cost of living is so high and many of us have two or three jobs. Or, because of work, the availability of classes at times that fit our schedules are pretty limited if they exist at all,” Penland said. “And, as for even older prospective students, people aren’t able to retire like they used to, so they don’t have time or money to attend programming because they are working to make ends meet.”
Penland said time and money serve as coveted resources for those raising children or living on a tight budget, making achieving a costly higher education unrealistic.
While Bales expresses gratitude for her college experience, she doesn’t feel her degree acted as an instrumental tool in aiding her success.
“I don’t at all regret going to college. I very much enjoyed it, but I don’t need a higher degree to continue my career,” Bales said.
Delete Image
Align Left
Align Center
Align Right
Align Left
Align Center
Delete Heading