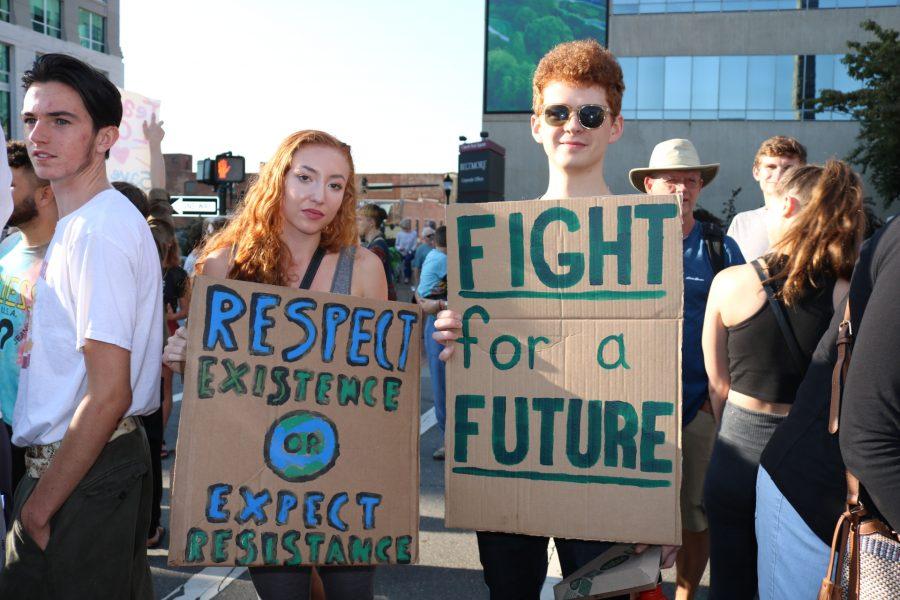 
Asheville saw demands for action the evening of Sept. 20 when the Global Climate Strike came to Pack Square in the form of rally seeking change in policy regarding the environment.
Following a walk-out and die-in staged in front of city hall around noon, the Climate Justice Rally was held in Pack Square and in front of Vance Memorial in Downtown Asheville.
Before the event properly started,  protesters chanted to the beat of drums on the sidewalk and in front of the obelisk on the side of the road near Broadway. The crowd cheered and yelled every time a car came by honking its horn in support of the protesters’ cause.
Attendees held up homemade signs displaying slogans like “The climate is changing, why aren’t we?” and “We are cancelling the apocalypse.”
“We are doing terrible things. Something has to be done to change it. We have to take it home to personally change it,” said attendee Bill Webster in regards to the state of the Earth.
For Webster, the solution starts with oneself. It means composting, recycling and just doing one’s part to cut waste and to reduce the footprint left behind on the Earth.
This was the purpose of the rally, to raise awareness of what is being done to the planet and what can be done to stop the rapidly declining condition the Earth is in.
Several organizations worked together to make the event a reality, but it was hosted by the Climate Reality Project’s Western North Carolina chapter, an organization aimed at bringing about a solution to the global climate crisis.
The rally was part of an international day of action in response to Greta Thunberg’s call for a day of protests taking a stand for the environment, meaning the event in Asheville was one of many simultaneous events happening worldwide on the same day.
Asheville’s event saw people from all walks of life from many cultural backgrounds stand up for the environment. Despite the movement being largely youth-driven, there was also a lot of people from older generations supporting the movement along with younger people.
The rally kicked off with music by Life Like Water, a local band with a message of environmentalism. After playing a handful of songs and recognizing the many organizations that collaborated to put the event together, the first speaker was called to the stage.
The event opened with calls to reconnect to the Earth and to return to the ways of their ancestors. For people to regain a reverence for the Earth instead of the destruction humans have been the perpetrators of.
Speaker and member of the Sunrise Movement Shane McCarthy spoke urgently of the climate’s condition.
“Scientists at the UN tell us that we have 11 years to change,” McCarthy said.
According to his speech, the climate is rapidly shifting. There has been an increase in powerful hurricanes across the globe, and more locally, Asheville’s rainfall broke records last year says McCarthy.
For McCarthy, this means that people need to stand up and say something in the hopes that climate change can be slowed down.
“When millions of people walk out on the same day, our government has to listen,” McCarthy said.
As a representative of the Sunrise Movement, McCarthy elaborated on the goals and accomplishments of that organization, claiming that the group has successfully lobbied for several bills to be pushed though governments that would hope to see real change in policy regarding the environment, including pushing a Green New Deal to Rep. Nancy Pelosi as well as putting pressure on the Asheville city council to declare a climate emergency.
The Climate Justice Rally not only aimed to promote awareness for the state of the planet, but the social state of things in the community. To many, including UNC Asheville student Tallis Monteiro, climate justice starts with social justice.
This means treating people fairly and with respect before the Earth can be treated with the same respect.
“Climate Justice is justice not just for the environment. You can’t have it without justice for all people, all plants, all animals,” said Monteiro.
Delete Image
Align Left
Align Center
Align Right
Align Left
Align Center
Delete Heading