Stonewall was a riot and pride is the continuation 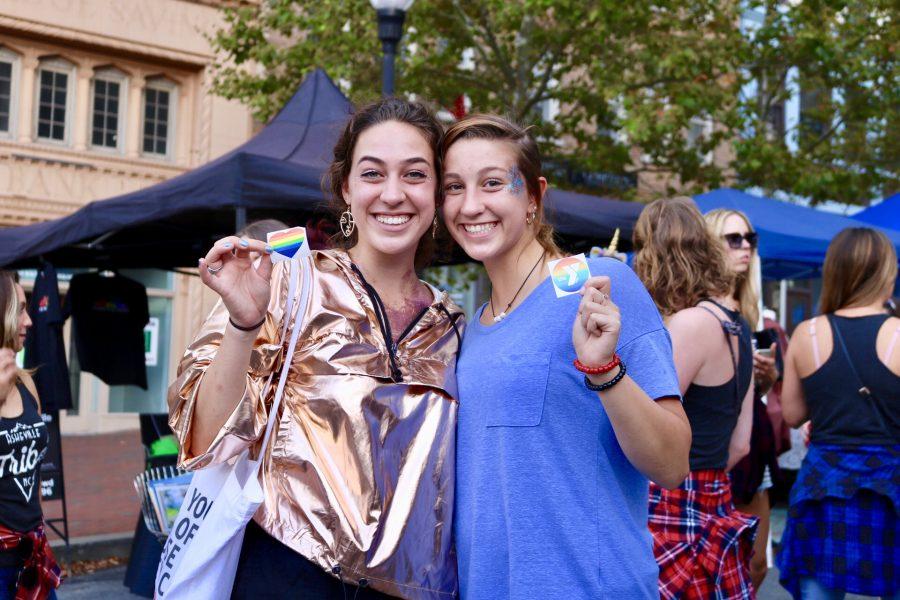 
From bricks at the Stonewall Inn, to glitter at pride parades today, members of the LBGTQ community show that they’re here, they’re queer, and they’re going no where.
“Pride is making yourself a seat at the table and sitting the fuck down at that table,” said Ryan Sidney Jenkins, a senior at UNCA.
Una Holland, president of UNCA Out told the story of Stonewall 1969 at their club meeting.
“Pride was a riot,” Holland said.
Holland said some people mistake pride for a party when in reality it’s a celebration and continuation of the riot that inspired it.
“When really we’re celebrating the fact that people fought for us to be able to say I’m gay, out in public and be whoever they want to be in life,” Holland said.
Before the pride we know today, queer people had one safe place; gay bars.
In these bars people knew they wouldn’t be judged for their gender expression or sexual orientation.
“It was the only place where people could go and just be open with each other and themselves and just be comfortable in their own space. That night the people that were there fought back,” Holland said.
Police officers in the mid 1900’s regularly raided gay bars with mass arrests and violating checks of cross dressers bodies to know if they were wearing clothes ‘appropriate’ to their sex.
This was done by police officers enforcing laws against sodomy and cross dressing.
“It was people afraid of trans folk and gay people and not knowing how to handle the fact that they were people just trying to have a good time,” Holland said.
Law enforcement went into the bar and arrested 13 people that night before people started fighting back.
“It was immediately pretty violent trying to shut down everything that was happening over at Stonewall because of transphobia, homophobia, horrible, horrible stuff happening,” they said.
Violence facing queer people is still extremely relevant today despite there being laws against it.
“Actually look in the news and see what’s going on and keep up with the list of the names upon names of people that are being killed still in this country for being queer,” the UNCA Out president said.
Violence against trans people, specifically trans people of color, has been characterized as an epidemic by the American Medical Association.
According to the Human Rights Campaign, 19 trans people have been killed this year alone in the U.S, with black trans women making up 16 of these murders.
Trans women of color have been at the forefront of queer rights movements since the beginning despite the danger in it.
“It’s because of these incredible women and other people that were there that rioted that we have pride today because our pride is celebrating the fact that they fought back those riots and they were adamant,” Holland said.
Marsha P. Johnson, a black trans woman who is credited with being a driving person in the Stonewall riot by many witness accounts.
“Marsha P. Johnson and so many trans women of color that went off on the cops and actually made a difference,” Holland said.
The riot at Stonewall inspired queer protests across America and the world, catapulting gay rights into the forefront of the political scene.
“Pride to me is an expression of freedom. Freedom to like men, freedom to like women, freedom to reject gender roles and expectations, freedom to like those who do the same, freedom to be true to all parts of myself without feeling ashamed or lesser, like I’m broken or malformed,” said Ryan Sidney Jenkins, a senior at UNCA.
Ez Perry, an art major at UNCA said that pride is like a second family.
“Pride means being able to exist in a very content space with who I am as a person and a sense of community and knowing folks are going to have my back, even if I don’t know them,” said Perry.
Pride has an imperative role in the LGBT community according to Ashlyn Con Krusze, a member of UNCA Out.
“It’s our safe space as a whole, and it’s really important for us to have it for our own mental and physical health,” she said.
Now, especially in Asheville, queer people are becoming progressively more able to be proud of who they are without the threat of violence.
“Being able to lead an organization like Out is an incredible opportunity for me where I can talk to other students and other people across Asheville and make connections and try to make it a better place for future generations of LGBT folks,” Holland said.
Even though much progress has been made, we are a long way from equality for the LGBT community.
There are 12 countries where being gay is a crime punishable by death according to the Human Dignity Trust.
“It’s mainly a message to those people who want to erase our existence. I think a lot of people in our country don’t realize that there are people that are like that,” Barbour said.
Delete Image
Align Left
Align Center
Align Right
Align Left
Align Center
Delete Heading