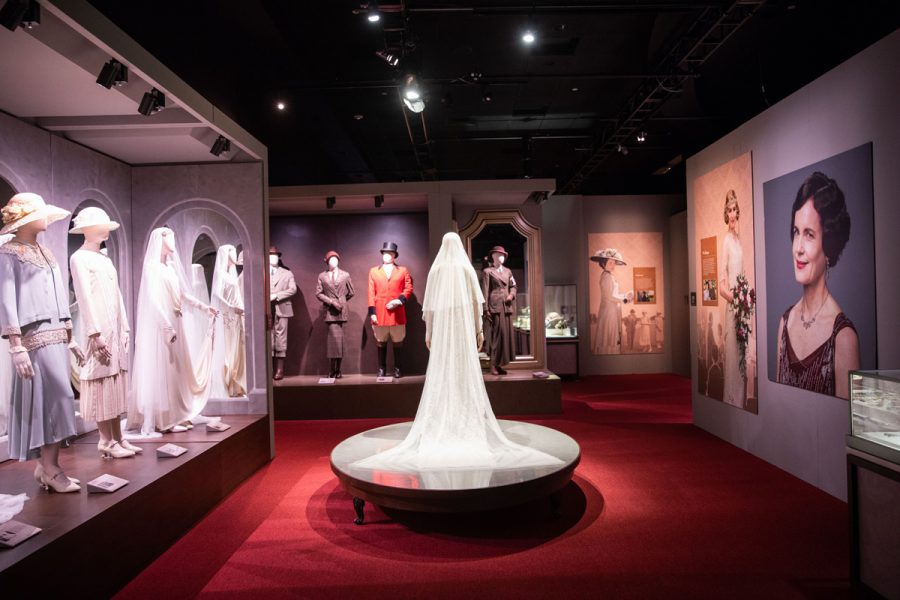 Provided by: Mallory Flynn Costumes from the show that will be on display in the exhibits Nov. 8 debut


The award-winning TV show “Downton Abbey” will be featured in an exhibition in the Biltmore Estate, bringing the England-set hit show to Asheville.
“”Downton Abbey” has a really interesting political commentary about when the British aristocracy lost power,” said UNC Asheville senior and lover of the show, Harper Gandy.
This exhibit will give both fans of the show and people who have never seen it an inside look on how the Vanderbilts in America lived, as well as the Crawley family in Great Britain.
“This experience pairs seamlessly with the real-life story of the Vanderbilt family, their friends, and staff as told through the magnificent rooms of Biltmore House, furnished with the original collection as it was during the family’s era,” said Mallory Flynn, the Biltmore Estate’s public relations coordinator.
The show follows the characters while they change with the times and the differing cultures they encounter.
“It’s really fun to see women in stronger roles as they explore the more modern lifestyle that they adopted from America in contrast to traditional British gender roles,” Harper Gandy said
Sarah Turner said as a watcher of the show she hopes to see connections between the Biltmore and the Crawley family from “Downton Abbey” in the exhibit.
“It would be interesting to simultaneously be here hearing about what the Vanderbilt family would’ve been going through at that same time period so you could compare and contrast British culture to American culture and how they’re emerging simultaneously,” she said.
The Emmy-winning TV show kicks off after the tragic deaths of 1,517 people in the sinking of the Titanic in 1912, Turner said.
“The heir to this big English estate in the countryside dies on the Titanic so the process of finding a new heir is what sets all of this into motion,” Turner said, who has a bachelor’s degree in history.
With the only male child dead and three daughters left behind, the patriarch of the family must find someone for the eldest daughter of the family to marry that will take the inheritance, kicking off the events of the six season run of the show.
“It follows into the first World War. It follows them through the start of the 1920s, follows this kind of into that Roaring ‘20s era. It’s interesting to watch them adapt and change with the time,” Turner said.
At this time in America, George Vanderbilt, who built the Biltmore, is soon to die in 1914 leaving his estate to his daughter, Cornelia Vanderbilt, according the Biltmore website.
“The exhibition also has a historic element to it. It will offer in-depth insight into the time period in which the show is set. Spanning World War I and the post-war years to the Roaring ‘20s, guests will have the chance to learn about British society, culture, and fashion, in addition to historical events of the era which would go on to shape the world,” said the Biltmore Estate representative.
The Vanderbilt family and the Crawley family were both families of affluence that carried their wealth through generations, both having exhibits where people can visit and learn about the history of the families.
The historical accuracy of the show down to military uniforms holds priority and it seems that the Biltmore has been just as meticulous, Turner said.
“I had a coworker who was telling me they have a military historian worked on the show while they were going through the episodes dealing with the first World War. Making sure that the uniforms were correct, if there were any metals on the uniforms that they are period appropriate and placed in the right spot,” the “Downton Abbey” the fan said.
The vivid imagery of the time is what drew her to the show and keeps her entrapped in the story.
“The costuming and the wardrobe that to me it’s just beautiful. The settings, the scenes, the backdrop, all of that. The actors and actresses that they have in the show are just amazing. You love them so much because they portray those characters so well. And it’s one of those shows that it doesn’t matter where I see those actors and actresses again, I’m always going to see them as so and so from Downton,” Turner said.
Gandy said she hopes to hear from her favorite characters in the show at the exhibit.
“I would love to see some interesting quotes from the actors about what their favorite parts were and what was most interesting to them working on the set,” Gandy said.
The exhibit will be set to take visual and auditory elements from the screen into real life.
“Holograms, video, life-size imagery from the show, and the “Great Hall of Character Stories” – an interactive hallway where guests get to interact with their favorite characters and hear their voices at a series of multimedia ‘stations’,” Flynn said.
Delete Image
Align Left
Align Center
Align Right
Align Left
Align Center
Delete Heading