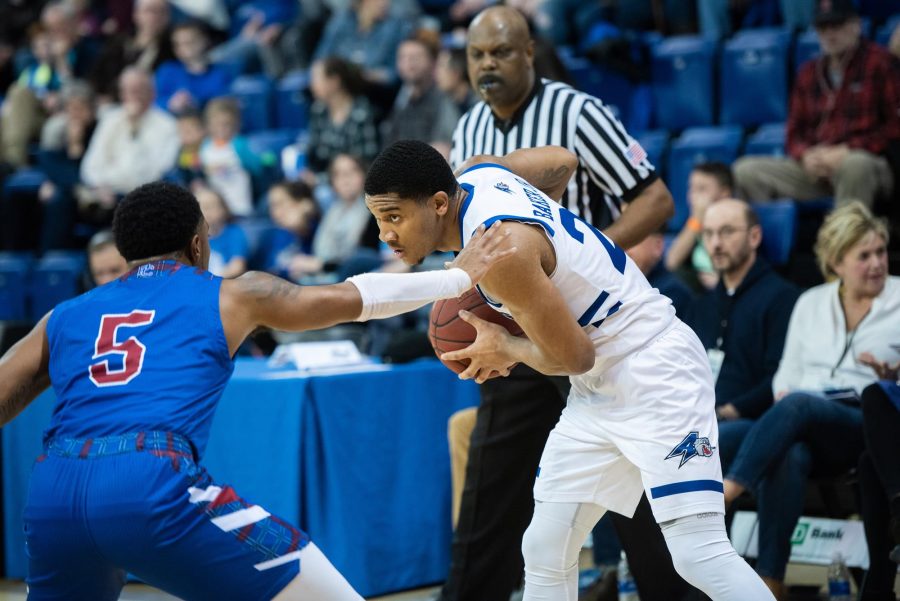 
UNC Asheville’s men’s basketball team begin their regular season with an away match on Tuesday at the University of Tennessee. The men’s team looks to improve after last season in which they went 4-27, marking their first losing season in nine years.
According to Head Coach Mike Morrell, the team worked hard during preseason and he looks forward to getting the season started.
“It’s been good. A lot of growth, a lot more guys back this year than we had last year so that’s obviously positive for us. I’m excited about our group, they work really hard, spent a lot of time in the gym. They were here all summer so I’m looking forward to a really good season.”
Coach Morrell said his goals for the team this season include contending to win the conference and competing with each other to improve everyday.
“Our goal every year is to compete for a Big South championship. But our main goal is to just try and be better today than we were yesterday and try to be better tomorrow than we were today. If we can continue to move a little bit closer to that goal every single day, and not move backward, then at the end of the year we’ll be where we want to be toward hopefully obtaining our ultimate goal. The goal is always to compete for a championship,” Morrell said.
On Oct. 22, the men’s and women’s teams took part in UNCA’s Bulldog Madness, an event that showcases the teams before the start of their seasons. Bulldog Madness included a 3-point shooting contest and scrimmage for the players, along with giveaways for the fans. According to sophomore forward Coty Jude, the exhibition went well.
“It was good. It was great to see the fans out there to support us, they’re always good to us so we appreciate them coming out. It was good for us to get a little bit of that atmosphere, especially the freshmen,” Jude said.
This week the team faces their first test of the season as they travel to Knoxville to take on the Vols. Sophomore guard Devon Baker said he and the team are eager to start their season.
“We can’t wait, we’ve been ready since last season,” Baker said with enthusiasm. “We had a hard season last year so we’re just ready to come out strong. It’s all we’ve been doing preseason, just working on our game and getting better every day.”
Baker had an impressive freshman year last season for the Bulldogs, starting every game with an average of 16.1 points per game. At the end of the season, Baker totaled 498 points, 93 assists and 85 rebounds, earning him a selection to the Big South All-Freshman Team.
In the teams first eight games, six will be away from home. Some of the team’s away games include big schools such as Tennessee, Wake Forest and UNC Charlotte. Baker emphasized the importance of the team’s preparation for the season’s tough start.
“It is very important, we have to come out ready. Away games are always hard because they’ve got home court advantage and everything but we’ve prepared for that through preseason everyday.”
Morrell also spoke on his team’s mentality for their start to the season.
“No matter where you’re playing, home or away, there’s a ball and two baskets. Obviously we’ve got some really tough road games that present a lot of challenges for us but we’re just trying to control what we can control and we gotta play on the road and hopefully we’ve done enough work to be able to be successful on the road. We’ll take it one game at a time just like we would anything else,”  Morrell said.
This season, the team comprises of three freshmen, nine sophomores and two juniors, a fairly young squad. Morrell similarly coached a young team last year during his first season as the team’s head coach. Last season’s team was the youngest team in the NCAA Division I. Freshmen played 76 percent of the team’s total minutes. However, Morrell said age does not affect the team.
“Age is a number. We’re still very young, it’s not really much about age as it is experience. Obviously we’ve got a plethora of sophomores who have a lot of experience but we can’t change our age, it is what it is and I don’t really look at anything as an obstacle, it’s an opportunity and that’s how we’re going to approach everything in our program.”
Jude was part of last season’s eight man freshman class and said last year’s experience helped him and other players prepare for playing on a young team.
“We’re not fazed by it. It’s actually been really great for us because since we did have so many incoming freshmen last year, a lot of players got a lot of minutes. So we’re going into our second year with a lot of good experience and we’re really going to be able to close out games and be ready for anything that comes our way and to be able to teach freshman how to do the same,” said the West Virginia native.
The men’s Bulldogs play their first home game on Nov. 16 at 6 p.m. as they host the Brevard College Tornados.
Delete Image
Align Left
Align Center
Align Right
Align Left
Align Center
Delete Heading