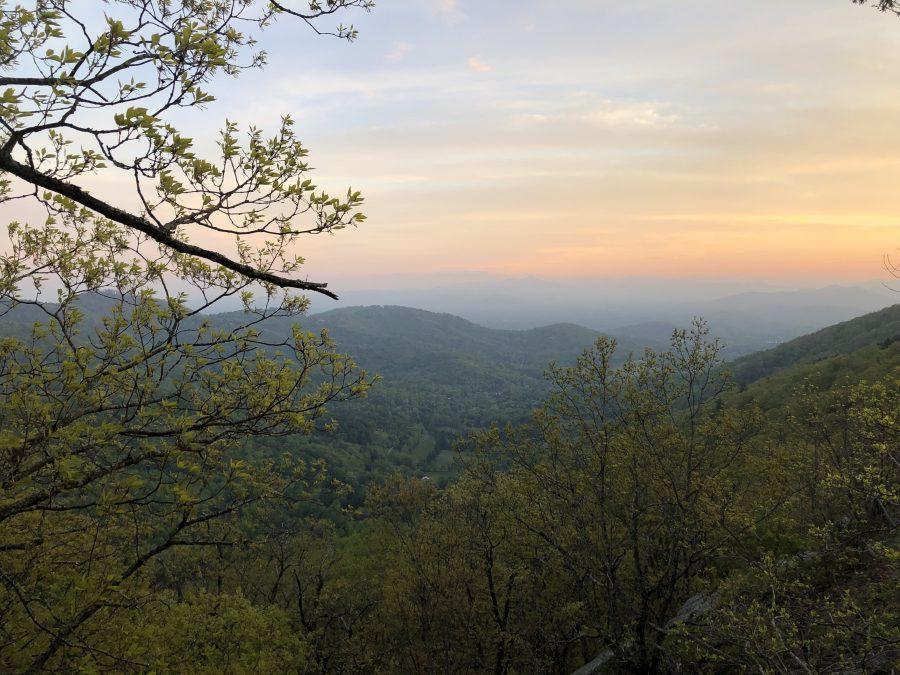 Sun sets over the lush landscape of the Blue Ridge Mountains.


When looking at nature preservation in terms of a capitalist society, issues begin to arise, especially in consideration with indigenous perspectives.
“While I do not think that preserving nature is a bad thing by any means, my hope would be that those who are actively participating in the preservation of nature constantly check if they are doing so from a colonialist mindset. Is the goal to preserve or to further exploit?” said Dakota Brown, program director for the Museum of the Cherokee Indian.
According to the Cherokee resident, colonialism drives the settlers fight for Cherokee land through the very definition to conquer and exploit. In history, European nations strove to do just that.
“Since this was the mindset and approach of these various European nations it is no surprise that it ultimately breed a world completely without balance,” Brown said.
Cherokees fought European colonists including the British, the French and Americans for over 300 years, the program director said.
“We had thriving societies, ancient cities and towns all throughout this region. The effects of European contact on indigenous communities are so vast and extensive that I would not even know where to begin,” Brown said. “The changes trickled into every aspect of our lives and altered the way that we function as a people.”
Colonization resembles swimming in a pool. The water, being colonialism, encompasses everything causing difficulties when attempting to sort through it all, said Trey Adcock, director of American Indian and indigenous studies.
“Colonization affected everything. You’re talking about food systems, you’re talking about kinship patterns, you’re talking about just simple things from walking everywhere,” Adcock said. “You’re talking about diet, you’re talking about mentality, you’re talking about dress, education, literally every facet.”
According to the Cherokee Nation native, Colonization occurred in other parts of the world where the colonizer left. In Northern America, the settler never left.
“Right when I walk outside everything around me is still operating and functioning, for the most part, by settlers,” Adcock said.
Capitalism became a monumental way the settler society operates by. It functions not only as an economic system but as a total system of valuation making everything have a value, often a material, monetary value, Professor of Sociology Volker Frank said.
“We humans have given nature a price and a value,” Frank said. “Air, water, land, particularly in the United States, have always been abundant; therefore, because you have so much of it, the value of it may have been very very low or no value at all because it’s always there. It’s free, but that can be an allusion as we now know because it becomes more and more expensive to have clean air or clean water. So all of a sudden it not only has a price, it also may begin to have a value.”
Chimney Rock Park General Manager, Mary Jaeger-Gale says the value of nature at the park centers around the education it provides to all, but most importantly, young students.
“It’s a great place to educate young students,” Jaeger-Gale said. “If they don’t appreciate nature then they won’t be future sustainers. More than anything, I think that’s a mission that we have.”
The park will be hosting a fall hike on Oct. 19 called the Naturalist Niche: Fall Ridge Hike with an admission fee of $23 according to the general manager.
“There is a fee to come to this section of the state park and that’s because it takes so many people to operate this part of the park,” Jaeger-Gale said. “There’s a limit to how many people can come in at a certain time. We don’t have parking for everybody, it would ruin the experience that everybody would have if there were so many people.”
Environmentalism, preservation and conservation all became involved in capitalism when the question arose if the representation of the value of nature in economics can be seen as adequate, Volker Frank said.
“Part of the slick aspect of capitalism is that it is not only an economic system, that it is also a moral system. In other words, what at some point may have been morality without capitalism, some people think that it has now become synonymous,” Frank said. “Our morality is profoundly shaped, perhaps even determined, by capitalism so that we’re not making moral decisions or that we’re increasingly incapable of making moral decisions without an economic spin.”
Capitalism then becomes a facet of colonialist exploitation. This can be seen through the incredibly imbalanced way that humans interact with the earth and the functioning of society through the exploitation of the environment in which we live, said program director for the Museum of the Cherokee Indian.
“For indigenous people, balance is one of the most important concepts. If nature preservationists would approach their work not to protect natural resources for exploitation, but instead approach it by trying to restore the balance between humans and the earth, then they would be thinking not in a colonist mindset, but an indigenous one,” Brown said.
According to the director of American Indian and indigenous studies, nature preservation should be viewed through the lense of who does it and, most importantly, if they listen to the people who come from the specific lands.
“If it’s Cherokee people, are they listening to Cherokee people? Cherokee people might know a thing or two. The intention might be good, I’m not knocking the intention of preservation, it’s a good idea, but who is making the decisions and who is being listened to and who is being thought of down the road? I think anything like that can be problematic. I think the intentions are good, but I think the question is who’s driving?”
Delete Image
Align Left
Align Center
Align Right
Align Left
Align Center
Delete Heading