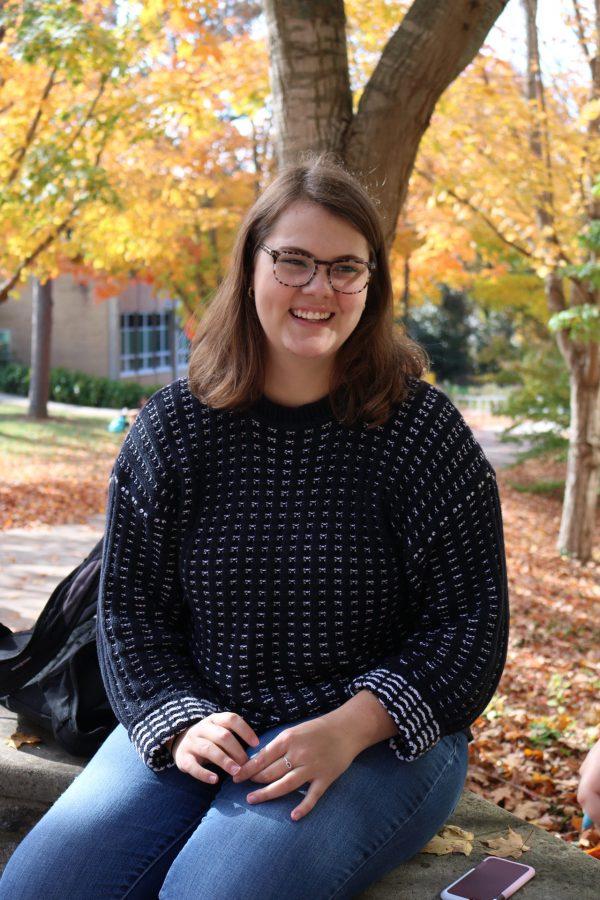 Photo by: Emily Arismendy Intern Libby Ward discusses her role in the process of collecting the oral history archives.

“It’s important because it gives a voice to those people who have been silenced for generations, and with this voice we can do amazing things and show people that what we say actually matters,” said Libby Ward, a senior intern for the oral history archive.
For almost a year, Ward worked with Special Collections located in Ramsey Library to document and archive the stories of the Western North Carolina community. Professor Amanda Wray began this project in North Carolina after doing similar work in Arizona. She wanted to do for the city of Asheville what hasn’t been done before. Now, Ward said they have collected stories from people in Arden, Cullowhee and more.
For any new interns wanting to help with the project, Ward helps steer the ship when she can. She teaches them how to prepare for archiving the histories. Teaching how to conduct an interview, transcribe the material and code and document the material once finished. Ward said although she has a lot of responsibility, she enjoys the fulfilment in helping others come to prepare their own interviews
“It’s great to see somebody who’s taken joy out of what they’re pursuing. I think of all the students and also the other people who are part of this partnership are taking joy out of this exploration of part of our history of  Western North Carolina,” Rachel Muir, a partner with Special Collections said.
With help from Muir, other participants and  resources from the YMCA and Blue Ridge Pride, Special Collections compiles a list of people in the community to interview and document their stories for the archive. These interviews began with wanting to collect the history of the Asheville LGBTQ+ community, but evolved into something more.
“We were looking for an opportunity for particularly younger people who are LGBTQ and elders to have a chance to connect to each other. Whenever possible, we’re trying to get the history, which means often going to the elders, they’re not always, but at the same time, budding younger people have the opportunity to be exposed to their experience,” Miur said.
Miur said by archiving the oral histories, it grants younger people in the community the ability to connect and expose themselves to a new experience with elders and learn the stories that might not have had a way of being shared before.
Ward said Special Collections is working to create a designated section to display the archived materials for others to see.
“It’s important to this area because LGBTQ folks don’t get a lot of recognition or even respect in more rural parts of Western North Carolina. It’s important for projects like that to spread visibility,” Andrew Webb, a Ramsey Library employee said.
Ward said through this program, she and other interns have been able to attend a conference in Alabama to share experiences, view histories and better learn how to archive their material with others.
“To talk with other people who were getting their master’s or their doctorate degree in this kind of work and then getting to talk to them and work with them and then giving us advice and us learning off of each other was just a really amazing experience that I’ll probably only get from Alabama,” Ward said.
The response to this project has been overwhelmingly supportive, Muir said. People of the LGBTQ+ community are able to share their stories in a way that benefits the entire community, while also enlightening a larger audience on what the LGBTQ+ community is like in a way they may not have known before.
“People often view the LGBTQ community as a kind of a monolith. Like, ‘Oh, you know, all those gay people know each other.’ Well that’s not true,” Muir said. “As we relay these experiences from a variety of communities within that larger umbrella, I think we’re opening up opportunities for communication and people who are at, the LGBTQ community or sort of finding out new things about themselves.”
Muir said the work Special Collections is doing is more than just an academic form of inquiry. It is a catalyst for change and she hopes soon, enough information will be collected to make widely available to make change and understanding.
Although she will soon graduate, Ward said she is eager to see how the project will continue to grow. The program hosts workshops, the last one hosting around 30 people, to recruit and train more interns as the list of people to interviews continues to grow. There are always going to be people that want to share their story and Ward is excited to hear where it goes.
“You can affect change. And that’s our larger goal. You know, that’s obviously a goal of UNC Asheville as a university and educational institution. And that’s the goal for Blue Ridge Pride. That’s the goal for the YMCA’s community based organizations. We want to educate, we want to create community, we want to make the community stronger,” Muir said.
Delete Image
Align Left
Align Center
Align Right
Align Left
Align Center
Delete Heading