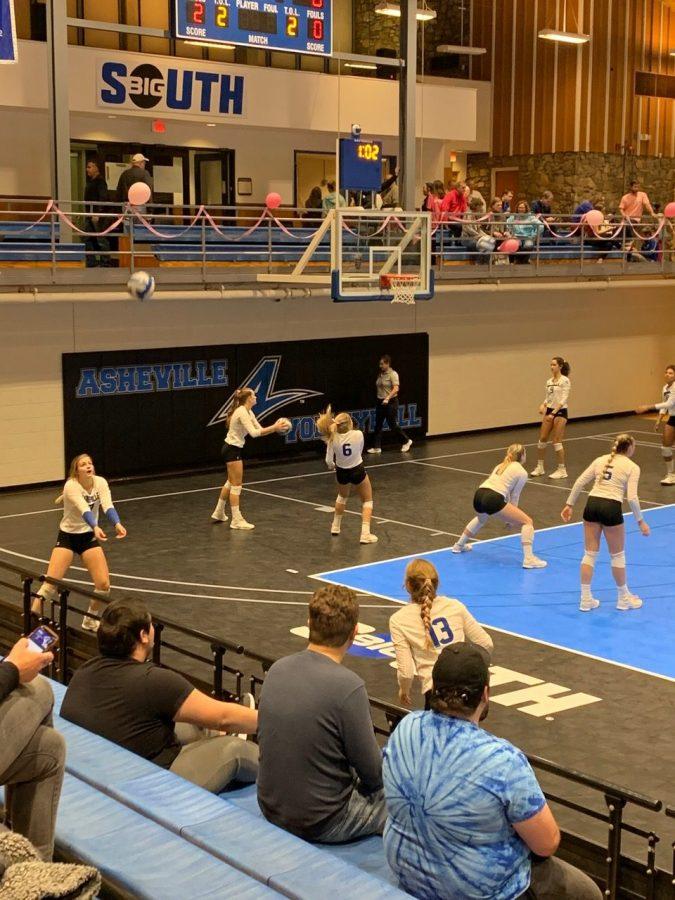 Contributor
[email protected]
Student-athletes carry busy lives, from practices to schoolwork and everything in between finding time for everything can remain a challenge for some, but not for one student.
As prime volleyball season comes to a close, Carter Kennedy, a senior student-athlete, reflects on her four years playing volleyball and managing everything.
Kennedy started playing the sport at nine years old, growing up in McKinney, Texas. According to Kennedy, she plays on a partial scholarship.
“We have six full out of state scholarships to divy up among all of the athletes on our team,” Kennedy said.
Being an athlete and full time college student requires a lot of one’s time because they have many responsibilities on and off the court, but Kennedy said she loves being a student-athlete.
“It makes you focus on academics and athletics at the same time. Not only do you have people holding you accountable on the court, but those same people will hold you accountable in the classroom as well,” she said.
Despite enjoying life as a student-athlete, Kennedy does occasionally run into challenges.
“The main struggles I come into are not with classes actually, but making time for my job that I also have. I work here with the athletic department and I have a giant commitment with them which I love, because that’s the career I’m going into,” she said.
Majoring in new media and minoring in mass communication, Kennedy plans to work in the sports industry related to graphic design.
“Sometimes I struggle finding a balance between finding enough time to do classwork, work, practice and weights, and other things that are required of me as an athlete,” Kennedy said.
Student-athletes are required to be full time students taking 12 credit hours each semester, but there is an exception for graduating seniors in their final semester, according to Kennedy.
“We have required study hall hours for the volleyball players,” said Frederico Santos, head coach for women’s volleyball. “We want to make sure that more than just they’re getting their own time in, we want to make sure that they’re getting time in that we require as well. So you’re kind of getting double study,” he said.
According to Santos, Kennedy and all athletes are students first and athletes second.
“My purpose here is to coach volleyball but it’s also to make sure their GPA is sound because if they want to jump into a master’s program when they’re done here, that’s gonna be a consideration, as well as to help them graduate on time,” Santos said.
Rebecca Nelms, assistant athletic director for student-athlete success, advises Kennedy.
Given access to GradPlan, Nelms can assist Kennedy in choosing her classes because she is a liaison between athletic and academic success.
“Rebecca will reach out to every professor that I have and they will report back and say, ‘Oh no he’s doing great, no worries,’ or ‘Eh, he’s not not doing so great in my class, maybe you might wanna look at a tutor,’ so we’re getting some feedback,” Santos said.
Nelms does not require student-athletes to meet with her unless they are starting to fall behind, she said.
“Some of the coaches have an expectation of their players that they’re gonna meet with me. I send out my calendar link and say, ‘This is my availability, sign up for a time if you’d like to meet with me’,” Nelms said.
Kennedy has access to all the resources on campus, Nelms said.
“One of the things that I think that’s really important that people understand, is it’s not a case that there are individual resources available to student-athletes that aren’t available to regular students, so if you’re having problems with your calculus class, the first stop is the math lab,” Nelms said.
Kennedy gave up life as a typical college student and said she wonders what that feels like.
“I know that I would have more time to do other things that I’m also passionate about, but when I look back on it, I willingly gave those things up knowing I could continue to play the sport I love for four more years,” she said.
Social life changed for Kennedy when she arrived to college because she doesn’t have the normal experience that everyone else gets, she said.
“All the people that aren’t athletes that are able to join fraternities, sororities, they get that aspect of college, but we also get to be a part of a team which in a way is kind of like our own little sorority,” Kennedy said.
Kennedy said she knew there weren’t many professional volleyball opportunities so she wanted to play as long as she could.
“We do kind of grow up knowing that once we hit 21 years old, we’re done with volleyball. It’s really sad. I think about it a lot, and it’s hard to think about,” she said. “Knowing that I am not going to have practice every day and be around the same girls day in and day out,” Kennedy said.
Kennedy plans to graduate in December and said she tries not to take the season for granted as she finishes in a couple weeks.