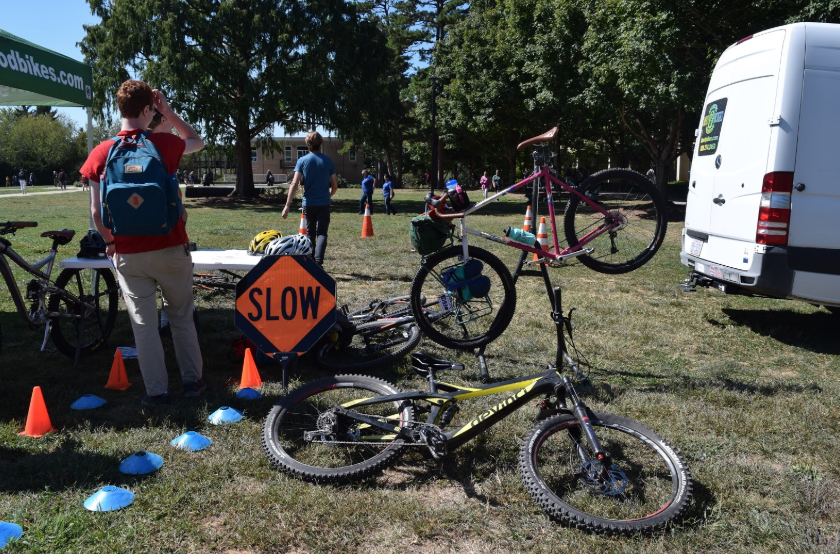 
Not having proper protection for bikes on campus may cause the loss of such a sufficient, healthy and enjoyable way of transportation.
“So this past year in July of 2019, there were more bicycle thefts in Asheville reported to the Asheville police department than there was in the entire year of 2018. So bicycle theft has gone through the roof. It’s been there’s been a trend upward exponential trend of bicycle theft,” says Eric Ernst, a lifetime biker and daily commuter who works at Youngblood bicycles in Asheville.
The best way to protect your bikes from being stolen is to get an extremely effective bike lock, registration with the university and locking to a permanent place. Sometimes the best thing is to just bring it inside with you, into your room or the store, he said.
“Also realizing that Asheville and Western North Carolina is an extremely bike-friendly town. So even, even if there is a bike rack, that doesn’t mean that you have to park your bike there. You’re free to do what you want with your bike within the limits of being a courteous citizen,” Ernst said.
Biking instead of driving a car can be a very positive impact on your health, bank account and for the environment, he said
“As well as being on a bike, you’re, you’re not only making yourself healthier and you’re making the community healthier cause for more bikes that are out, the slower traffic goes, the more people other people are motivated to get out of their cars to, to ride a bike, to use the bus to use some of the services that our community provides that we paid for tax money,” Ernst says.
According to Ernst, riding your bike to long distances can be hard so you can use public transportation such as the bus can be a resource.
“And to get out of the car reduce pollution, reduce congestion, reduce noise and not only make ourselves healthier but make our community healthier, our planet healthier,” Ernst says.
Nicholas Grandstaff, a sophomore at UNCA studying mechatronics, this is his second year of having his bike on campus.
“I brought my bike on campus freshman year because I did not have my car and for me, it is a good way to blow of steam. I am now in my second year and if I can, I try not to take my car places because I don’t want to pay for gas and possibly lose my good parking spot. It is also fun to ride downtown on a late Friday or Saturday night because there are so many people out,” Grandstaff says.
According to Grandstaff, he keeps his bike in his room to prevent it from being stolen which has worked for him since he has been at UNCA. He offers the same advice to people thinking about bringing their bike to campus.
“I leave my bike in my room because I am sure it would get stolen if I left it on one of the bike racks here on campus. Multiple bikes that have had a more advanced lock on them have been cut and stolen so if I do lock my bike up outside it is not for very long,” Grandstaff says.
Eric Boyce, the assistant vice chancellor for the public safety of UNCA for the past nine years, says it is uncommon for bike theft to happen.
“It comes in waves. We might have, you know, once a month or so. We might go for several months without it, so it’s not commonly occurring on campus. But we have had a bike theft and we have had multiple ones within a short period of time,” Boyce said.
After a bike is reported stolen, the police officer searches the national criminal database using the serial number of the bike, he says.
“We have had in my nine years, probably two students who have received their bikes back. One of them, the person just wrote it from campus to downtown and abandoned it and the officers were able to locate that. It was actually registered a, which is another recommendation is that if you bring a bike to campus, you register it gets a UNC Asheville bike registration sticker that you can put on it. So that’s how we were able to get it back as to cause it had a UNC Asheville bike registration sticker on it,” Boyce says.
Boyce recommends that UNCA students register their bikes with the university’s bike shop, lock up the bike to a permanent object and to lock up the frame of the bike, not the wheels.
“Oftentimes if bikes are left unsecured, it would be stolen as a mode of transportation or what’s commonly known as joy ride. They just do it to get from point a to point B or ride around, no intention on keeping it, but it’s just a mode of transportation. Others for higher-end bikes that are more expensive have expensive parts on them. They could sell them or pawn them and get more money than just kind of a regular bike you’d get out of Walmart,” Boyce said.
Delete Image
Align Left
Align Center
Align Right
Align Left
Align Center
Delete Heading