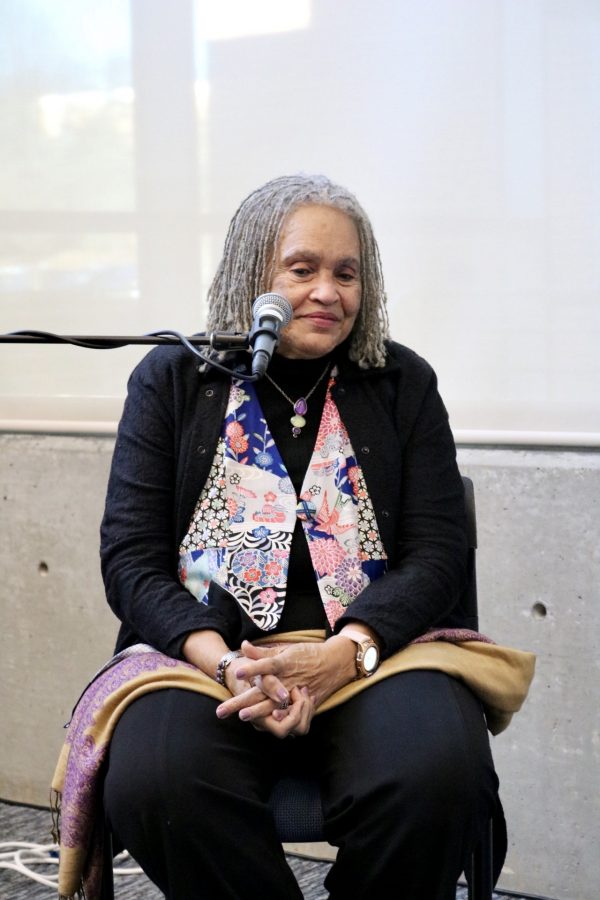 
Award-winning journalist, author and Civil Rights Activist Charlayne Hunter-Gault visited campus last week forUNC Asheville’s Martin Luther King Jr. 2020 Commemoration where she gave the keynote lecture “From Jim Crow America to Apartheid South Africa and Beyond: An Activist Journalist’s Journey.”
Hunter-Gault spoke of her experiences as an African American woman who lived through and fought against segregation and racial injustice at a master class prior to the keynote lecture. A theme of her class was Martin Luther King’s importance of love in your heart when having tough conversations. She discussed the power of names, commonalities shared things, being graceful and showing kindness to others and your community.
Hunter-Gault worked for the The New Yorker and The New York Times and served as a foreign correspondent for National Public Radio and the Public Broadcasting Station. She is credited with successfully challenging segregation and gaining entrance to the University of Georgia, where she was the first African American woman to attend.
Hunter-Gault said she was influenced by her supportive family and community to become a journalist.
“I think that kind of background was what set me on the path to reporting people in ways that are recognizable to themselves as opposed to the stereotypes. When I joined the Times in the ‘60s we were still reporting people in ways that were not recognizable to themselves. I set up a bureau of The New York Times, the first domestic bureau in the black community so that I could be there everyday,” Hunter-Gault said.
The question and answer session was moderated by Mildred Barya, an assistant professor of English at UNCA, accomplished poet and creative writer.
“I feel honored and also happy that I get this opportunity to ask her questions that I care about but that I also know she cares about,” Barya said.,
“I like that we are having these visitors. These guests, they bring in multiple perspectives, not just one. Especially if you have someone like Charlayne who is really a world journalist, not just an American journalist. She’s covered a lot of events and things happening in South Africa, she’s traveled, she’s lived in different states, so that is always helpful because then you get to know that she has experience in what she’s talking about. She also brings in multiple perspectives. I like that this is happening because it contributes to the liberal arts education and also appreciating diversity in all its forms.”
The event was coordinated by Cori Anderson, the associate director of the Key Center for Community Engagement.
“This is a part of the cultural events series and it’s also the annual MLK keynote address. My job here is to program the cultural event series and I’ve been doing that for the last seven years,” Anderson said. , “We have a MLK programming committee and the committee is made up of faculty and staff. We reviewed lots of names and important figures and the committee decided that after lots of research and conversations that we thought the timing was really good to have her here because of her history and part of what she referenced today of having tough conversations.”
Emily Stepp, a creative writing student at UNCA, said she enjoyed Hunter-Gault’s discussion.
“Getting a perspective from someone who lived through the civil rights movement, which isn’t one you get to see often. Just because of where I’ve lived and where I’ve grown up, it wasn’t part of my experience. My grandparents would have experienced it but not in the same way as a person of color. I think getting that perspective is always interesting, to just get the other side of the history,” Stepp said. , “Her message of taking a step back and learning to appreciate the differences that people have and to reflect on ‘Hey I’m angry about this’ but what is a way that I can forgive the person that is causing this anger. That’s a message I can really get behind.”
Delete Image
Align Left
Align Center
Align Right
Align Left
Align Center
Delete Heading