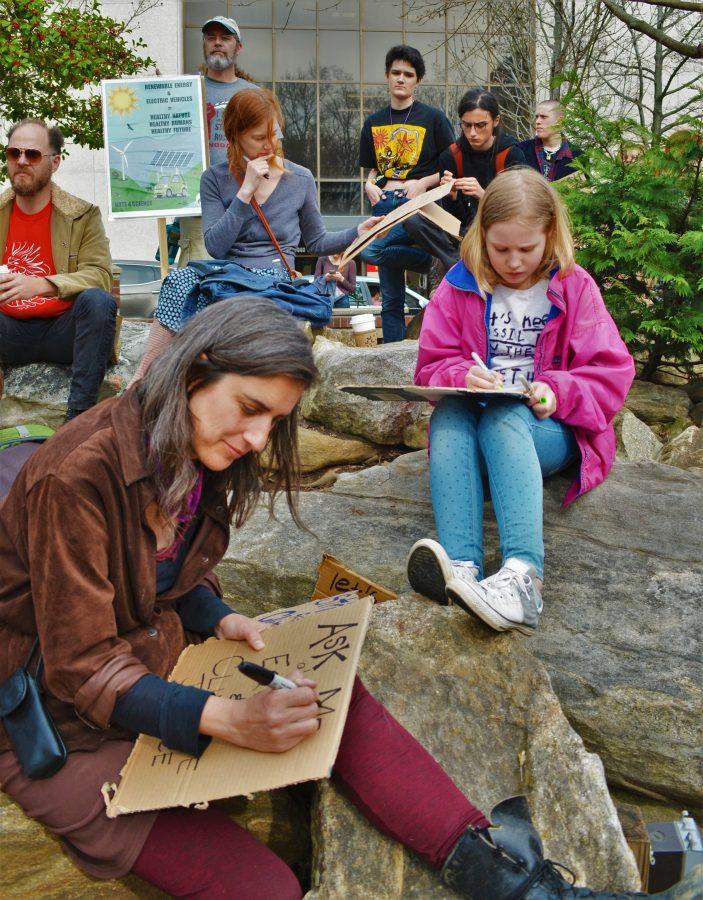 
As injustice arises every day in society, communities of shared beliefs come together and use their power in numbers to speak out, to march and to create change, said Cortina Janelle Caldwell, founder and creative director of adé PROJECT.
“When people are resisting, they’re wanting to be seen as human and they want to say that ‘My voice matters too,’ and we shouldn’t be on the scale of difference and otherness and privilege; we all actually should have a chance to start at the same place,” Caldwell said.
Caldwell presented on the topic of marching and the culture of organizing and community building during UNC Asheville’s 2020 commemoration of Martin Luther King Jr.
“It’s really about how you can integrate this into your life and do this work and really understanding why this even needs to happen is a part of our responsibility as humans,” she said.
Challenging society and political institutions takes many forms according to Caldwell. Students initiate change by creating clubs on campus or participating in conversations, she said.
“There’s always a place for students,” Caldwell said. “I think it’s really important that we remember and know that there are things that we can do and it’s not going to look the same for everybody, but it certainly doesn’t have to look like us doing nothing.”
Caldwell encouraged students and community members to speak out when it’s uncomfortable and to have faith in the power of human relationships in the face of an inequitable world.
“I march because I know there are people in my family and in my ancestors’ that didn’t have that chance. So I march because of them and with that knowledge,” said Sumayah Haynes, a Black, Muslim junior.
Rosemary Farley, activist and head of the unaffiliated Bulldogs for Bernie, said communication is key when trying to create change.
“Talking to voters is the number one way to get people to vote for a candidate or to be involved in any political organization or social movement,” Farley said.
Bulldogs for Bernie first formed when the 21-year-old began canvassing and phone banking work in South Carolina over the summer.
“When they were like, ‘There’s nothing going on here,’ I was like, ‘Okay, we got to start it,” Farley said.
The Campus Recreation employee described the organization’s work as tabling on campus and canvassing around town in an attempt to spread information on voting and to promote activism.
“You should find something that really resonates with you,” Farley said. “You can find a place to funnel that energy such that you are able to turn it into something.”
Danielle Holtz, UNCA senior and co-president of Active Students for a Healthy Environment, said anyone can find a way to be an activist.
“There’s something for everyone regardless of what their passions may be as it pertains to sustainability and equity,” Holtz said.
ASHE holds the title of the oldest environmental club on campus. Their mission strives for the promotion of environmental sustainability through an intersectional lens.
“We try to empower young people to promote their activism and to find their passions,” Holtz said.
The organization works with four main committees: the foraging committee, the leftover takeover project, the sunrise committee and the animal rights committee, Holtz said.
“The committees change based on the passions of current members, so if someone was really interested in a certain issue that we’re not highlighting right now, we could totally make a committee for that and connect with a community partner and do some really cool work,” Holtz said.
The 21-year-old senior recognizes the vast world of equitable sustainability and encourages other students to volunteer their time to places like UNCA dining and their food procurement and sustainability initiative.
“Activism is really great and it takes everyone and it takes passion and dedication to create a just and equitable world that we don’t really have right now,” Holtz said. “We have to keep fighting for it and pushing for it and even when it gets uncomfortable, we have to keep doing it.”
Karuna Li, UNCA Sunrise Movement help coordinator, said activism requires sacrifices and more than showing up to strikes.
“It might mean taking a little bit more time out of your day to organize or maybe even signing up to be an arrestable at a sit-in or just taking a little bit more risk,” Li said.
The freshman activist said the Sunrise Movement in Asheville originated in February of last year as a youth-led organization pushing for the Green New Deal and for legislation to take action on the climate crisis.
“The way we talk to legislation is through mass noncooperation, which are like the strikes that happened last semester. We sit in at their offices, we are loud in our art and we also try to get the public’s attention,” she said.
Delete Image
Align Left
Align Center
Align Right
Align Left
Align Center
Delete Heading