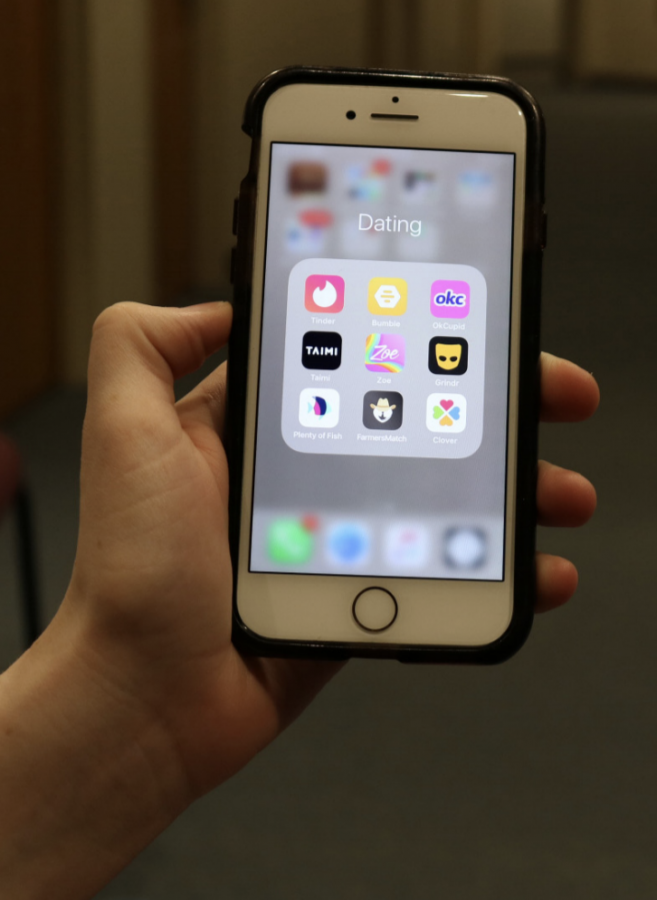 
Students at UNC Asheville and other colleges use apps such as Tinder, OkCupid, Grindr and many others for different reasons. UNCA officials advise caution for those who actively use and meet people through these applications.
“The reality is, you have no idea who the other person is that you’re interacting with. You have no idea what their intentions are and that itself is an extremely dangerous situation,” said Jay Cutspec, the director of UNCA’s Health and Counseling Center.
“Don’t let them know where you live, meet in a public place, don’t let them pick you up like you would a normal date,” he said.
According to Cutspec, interacting with these apps requires caution and planning in order to stay safe, such as providing your own transportation.
Eric Boyce, the chief of police at UNCA, voiced similar concerns.
“There is always an inherent danger with online dating,” Boyce said.“If you’ve never met someone before, it’s always good to meet in a highly crowded location.”
Areas such as restaurants, populated bars and other public places are preferable, according to Boyce.
“Try as much as you can not to isolate yourself with that person. Never meet in a person’s home or in a secluded place.”
Officials advise students to ensure they have a way to reach out if the need arises.
“Make sure you have your phone with you and it’s always charged. If you go to a place, check the bars on your phone to make sure you have service,” Boyce said.
Another means of ensuring your well-being includes downloading the Rocky Shield app.
According to Boyce, one feature allows students to set a timer on the app, alerting up to three contacts with an updated location of their phone with a text message.
“That text message is a map with a pin drop, that pin drop lets you know the exact location of their phone,” Boyce said. “It refreshes every 15 seconds so the friend can see on their phone if you’re moving, if you’re back on campus or if you’re in a stationary location.”
When speaking with a person through a dating app, Boyce says there are warning signs that may alert you to a potential threat.
“One of the important indicators that you may be dealing with someone who is trying to conceal their identity is if they are never willing to have a phone call with you,” Boyce said.
According to Cutspec, students should watch out for misrepresentation.
“If you are an 18-year-old male student and you are communicating with a 14-year-old girl and she tells you she’s 18 and you go out with her and have some sort of sexual contact with her, it does not matter that she told you she was 18 in this state,” he said.
While these dating apps pose risks, they can benefit students in certain ways as long as they understand and minimize the risks, according to Cutspec.
Meeting new people can cause students anxiety which is a completely normal response, Cutspec said.
“I think for most people the traditional sense of dating, meaning somebody going on a first date, is a very stressful situation,” Cutspec said.
According to him, if the only thing holding someone back from pursuing a relationship is taking that first step, using electronics may provide a solid starting point.
Even after taking that first step and downloading a dating app, user experiences vary from person to person. Students said that their satisfaction depended on many factors including the amount of time they spent on the app as well as their location.
“I think over the three times I’ve used OkCupid I’ve had maybe three real conversations,” said Brian King, a 27 year-old Navy veteran and full-time student at UNCA from Cary.
According to King, the app is dominated by fake accounts and absent users.
“Honestly it’s 90 percent people not responding,” he said.
“It wasn’t what I was hoping for,” said Alex Loofboro, a 28-year old UNCA student and Marine veteran who used Tinder and Plenty of Fish prior to living in Asheville. “The few times I met an actual person, they were looking for a short-term relationship.”
These dating apps may not be for everyone. According to Loofboro, when the other person wasn’t looking for a hookup, the account was run by a robot.
“They were mainly bots that led to back-page or cam-girl channels,” he said.
Delete Image
Align Left
Align Center
Align Right
Align Left
Align Center
Delete Heading