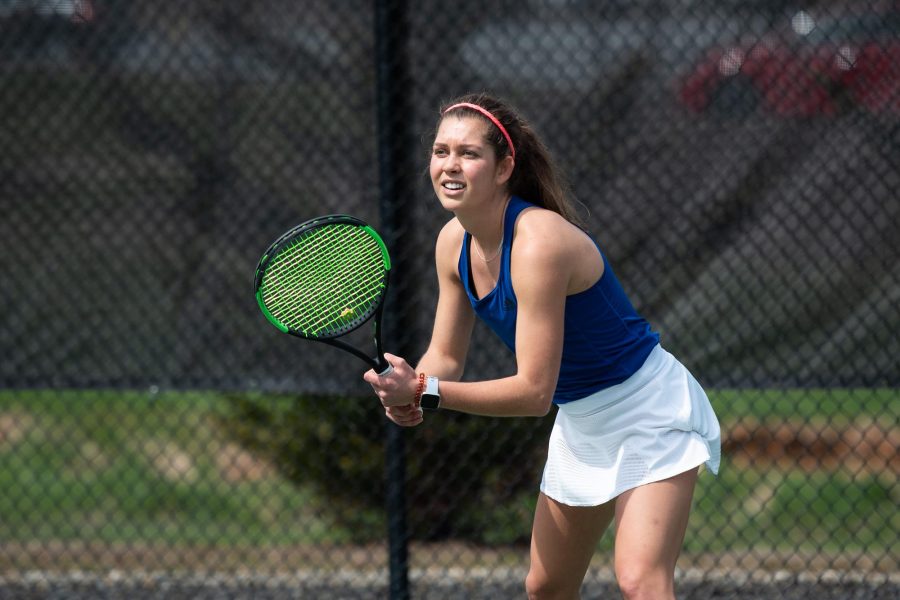 Photo By Adrian Etheridge Emily Sidor, senior co-captain for the women's tennis team, get ready to hit a shot during her match.


After stellar wins against both Tusculum University and UNC Greensboro, UNC Asheville’s women’s tennis player Emily Sidor won Big South player of the week.
Sidor, co-captain of the women’s tennis team, went undefeated in both her singles and doubles matches during the team’s first two games of the season. These wins warranted Sidor her first Big South Player of the Week Award, an achievement she said she was thrilled to receive.
“It was definitely super exciting. I think it was mostly exciting just because the team got some recognition, we all deserve it, and it was great just to put UNC Asheville’s name out there as well,” Sidor said.
According to Sidor, the team’s first two wins were important to start off the season.
“Tusculum was our first match so it was a bit of nerves, excitement. It was really good to kind of get that win under our belt and then Greensboro we had the tailgate so we had a lot of people out here and it was really nice just to have the support of the community and to get that win, it felt really good. Greensboro is very tough, a good team, so it was huge for the team to win that match as well,” the Florida native said.
In her singles match against UNCG, Sidor won after a tough contest. Sidor came back during both sets, winning the first 6-4 and the second 7-5. Speaking on the match against Greensboro, Sidor said she performed well despite the difficult match up.
“It was definitely tough. I was down 4-5 in the second set so she had the chance to win the second set and I was able to come back and win three games in a row to win the set. I did the same in the first set, too. I was down 3-4 and was able to win three games in a row to win the set. It was definitely a tough match and I think I fought pretty hard and was able to win it so it was exciting,” Sidor said.
Sidor’s co-captain and doubles partner Lauren Watson-Steele said Sidor’s formidable performance against Greensboro showcased her character as a player and person.
“I think the main thing that stands out in her performance is her resilience. Like she said she came back from when she was down. On and off the court just constant resilience and never really giving up so I think that’s a great example as a senior and as a co-captain,” Watson-Steele said.
Sidor and Watson-Steele both teamed up against UNCG to win their doubles match with a commanding score of 6-1. Sidor spoke on her doubles performance and partnership with Watson-Steele.
“It was really great, we have really good chemistry on the court so it works really nicely. Especially the first match win Lauren was able to hold us up when it got really tough, she was definitely a key player in that first match. In the second match, we kind of had it figured out and we just played really well and took over and won that match easily,” Sidor said.
Thanks to Sidor’s wins in both singles and doubles, as well as strong performances from the team, UNCA narrowly defeated Greensboro 4-3. This marked the first career victory over Greensboro for the team’s Head Coach Lise Gregory.
According to Gregory, Sidor fully deserved her recognition as the Big South player of the week.
“I’m glad she got the recognition, she was excited about it. It’s nice for her to get the recognition just as hard as she works, I mean she’s the one that’s out there every day in practice like ‘Hey coach, can I do more of this? Can I do more of that?’ She’s the one that’s out here practicing on days off, she’s the one that’s hitting extra serves. I mean she’s just, she’s a worker,” the South Africa native said.
Watson-Steele also spoke on Sidor’s admirable qualities as a player.
“As a teammate I would say she’s a very good leader and inspiring. With her resilience you can always count on her to put in 100 percent her best work and I think especially with the new members it’s great to have that example. Just being with someone that you can rely on is very important in a team, big or small,” Watson-Steele said.
After their first week of games, Sidor and the team continued their good form with a win against Mars Hill. This win marked a 3-0 start to the season for the team, their best start for five years.
“It’s definitely important to start out well, kind of gain that confidence so that going through the season, going into conference matches where it counts a little more, we’re ready and have that confidence to go out and know that we can win any match,” Sidor said.
Against Mars Hill, Sidor won both her singles and doubles match by a score of 6-0, three golden sets. According to Gregory, Sidor was able to work on some aspects of her game against Mars Hill.
“She was a little bit more aggressive in that match. The goal was giving her more sort of short block opportunities so she did a good job with that. She worked on some things in that match that I think will be helpful moving forward. It’s always good for her to be a little more aggressive at times and take advantage of opportunities,” Gregory said.
As the season continues, Sidor said she and the team plan on taking it one game at a time.
“Goals for the season are to kind of focus match by match on what we need to do to win and to get better as we go as well. Kind of focusing more on the process and not so much on the outcome,” Sidor said.
Delete Image
Align Left
Align Center
Align Right
Align Left
Align Center
Delete Heading