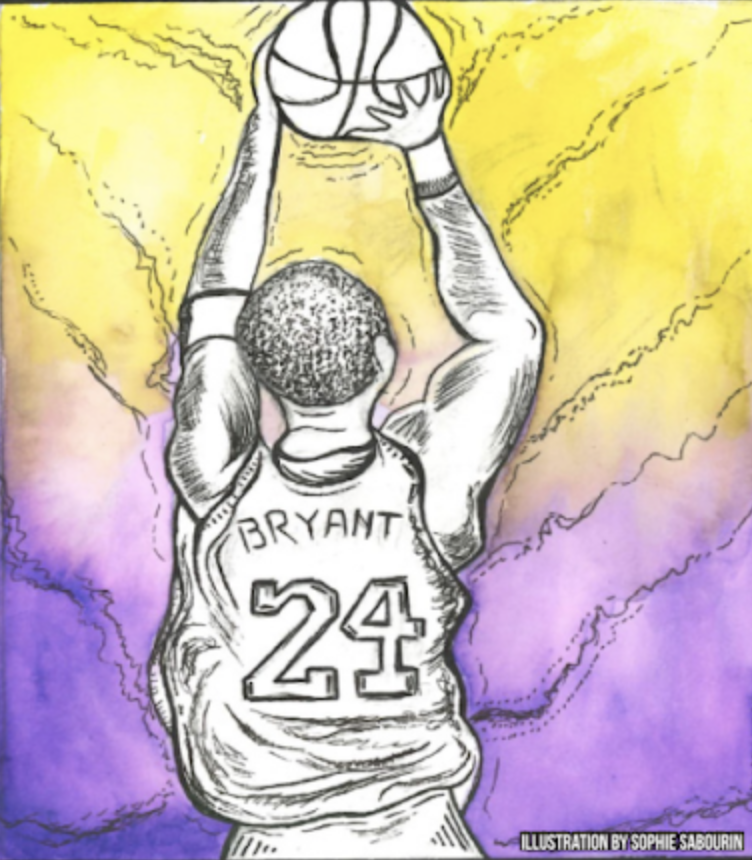 Illustration by Sophie Sabourin Illustration of the late Kobe Bryant, mourned by the UNCA community.


The unexpected death of five-time NBA champion Kobe Bryant sent shock waves around the world last week.
“People are gonna be talking about him for a really long time,” sophomore, art student Tia Willis said.
Along with Bryant, John, Keri, and Alyssa Altobelli, Sarah and Payton Chester, Christina Mauser, Ara Zobayan and Gianna Byrant, Bryant’s second-oldest daughter, lost their lives in a helicopter crash on Jan. 26 in Calabasas, California.
“Bryant’s death affected people all over the world. I follow these art pages on Instagram and they’re showing all these different murals that are going up all over the world in China, in Korea, and all these different places where he affected people,” Willis said.
Sophomore English and psychology student Johanna Ayala said even though she wasn’t personally impacted by Bryant’s death, she has seen Bryant’s impact on campus.
“He put value in what he did and it shows throughout his legacy as a basketball player and as a humanitarian,” she said. “A lot of my friends watched him on TV growing up and would try to follow his example. His death impacted them in the fact that they lost one of their biggest influencers. My friends are grieving for him. It’s like losing a friend or a family member.”
Ayala’s friends are not alone. Bryant’s death reverberates within basketball players on campus as well.
“We were pretty hurt,” UNC Asheville basketball player Cress Worthy said. “His death is definitely gonna affect the basketball world because everyone looked up to him just because of how hard he worked. He was an assassin, he would eat your heart out on the court, then he would help you up and eat your heart out again.”
According to UNCA basketball player AJ McBride, the world lost more than just Bryant’s presence.
“I feel like we lost a lot of knowledge, not so much basketball-wise, but with life, with his persona and everything. He was just a legend,” McBride said.
Idolized for his dogged mindset and dedication, Bryant’s legacy dramatically impacted players like Worthy.
“My dad introduced me to Kobe when I was three years old. He’s the reason I picked up a basketball. That’s who I wanted to be like,” he said. “A lot of our team felt it, even if they weren’t fans of Kobe, or Kobe wasn’t their favorite player, it still impacted them.”
The imprint Bryant left on the lives of young basketball players caused players like McBride, an ardent admirer of Bryant and UNCA’s No. 24, to take Bryant’s death personally.
“At first, I was in disbelief. In a way, I’ve always viewed him as immortal. Soon after I found out, everyone started calling me. That’s when I started to panic and get anxious. Until this day, I’m still in disbelief,”  Mcbride said.
When Worthy heard Bryant was dead he cried.
“The grieving process was the same as if I’d lost someone in my family because I felt like he was family,” Worthy said.
UNCA Health Promotion Coordinator Kendra Mullert said personal grieving over the death of a celebrity is a very common and normal occurrence.
“It reminds you of how close death really is. If you don’t know somebody, they’re invincible, and so when something tragic happens reality hits unbelief. You realize ‘Oh they really are human.’ Death has no barriers, it’s the same for everybody. It makes you reevaluate your current life,” Mullert said.
Mullert explained grieving over the loss of a celebrity transcends the loss itself. She also explained the importance of acknowledging grief.
“Your grief is very real,” she said. “You’re not just grieving over Kobe Bryant’s death, you’re grieving over something more. Think beyond Kobe, it’s so much more than just basketball. What he represented is also what you’re grieving.”
Mullert also stressed the importance of progressing through pain and grieving correctly. “It’s really important that you feel the feelings. Even if that means you cry or you go to the gym and take it out on the weights. Sit with your feelings and process them and when you get through it, you’ll feel like a different person,” she said.
Sophomore chemistry student Grace Lawhern said recollection helps people deal with and progress through loss.
“I would just be looking back and trying to move forward because, there’s that sadness, but you know there’s that happiness that he did do great things that people remember him for,” Lawhern said.
Tragedy serves as a reminder that loss correlates to mental health, Mullert said.
“Anything you take personally has an effect on your mental health, it just depends on how you process it,” Willis said.
Since grief can potentially have damaging mental health implications, Mullert stressed the importance of paying attention to one’s mental state in times of loss.
“If you find yourself struggling to move on, you’re shutting down, you can’t get out of bed, after processing and feeling the feelings then seek help. Honor yourself. You’re worth being known,” she said.
As students continue mourning, Bryant’s legacy remains alive.
“I think the kids coming up, their parents are gonna introduce them to who Kobe was. The Mamba mentality is probably gonna go worldwide now,” Worthy said. “I don’t think we’ll ever come around someone like him again, Kobe was a different breed.”

Refer Box? : * If you are struggling with mental health, please set up a free appointment with the Health and Wellness Center. In case of an emergency, immediately dial 911.