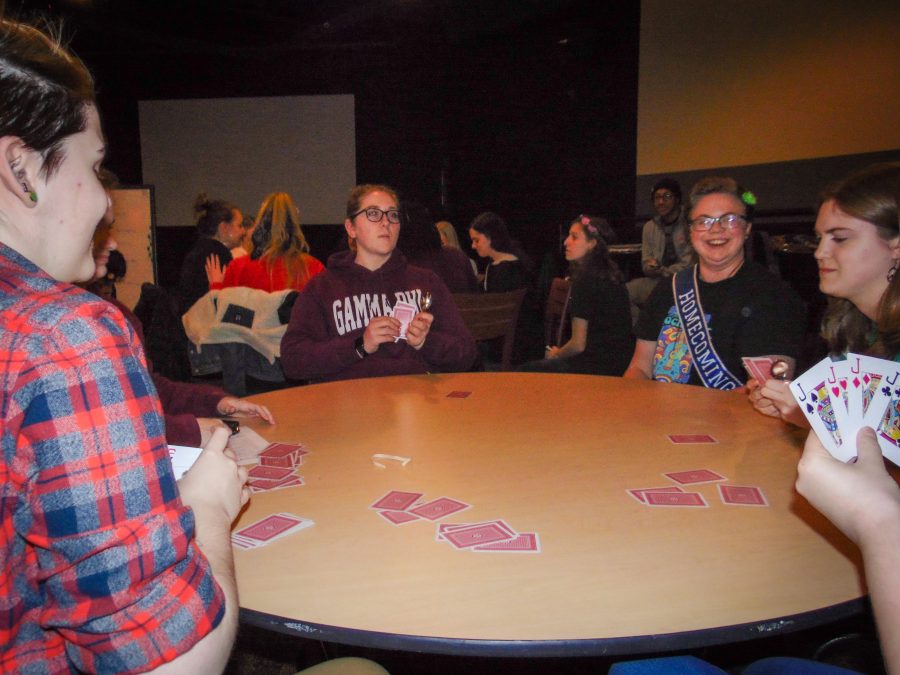 Photo by Jensen Stephenson Horace Vanderbilt and Delanie Foster prep for another round of the Spoons tournament.


Students dive over tables grabbing at spoons in an attempt to win the Highsmith Student Union tournament of Spoons during Homecoming in February.
“This is one of the events during homecoming week. It’s called the Spoons tournament,” said Stan Sweeney, director of Highsmith Student Union and Student Activities. “It’s basically just an elimination process and then there will be two teams at the end. First place will win $150, second place will win $100. There’s also spirit points and if they dressed the part, so you see some people with tie-dye on. Participation points are 50 for the entire homecoming competition.”
Spoons is the card game the UNC Asheville students voted on to play in the homecoming competition.
“It’s two teams of three for each round. Basically we do one less spoon for however many people are playing. If there are six people at a table there will be five spoons. The goal is to pick cards from the pile and then hand them to the next person. You have to be able to pick four of a kind. So four jacks, four aces, four twos, and then once you get those four you take a spoon and then everyone else has to get those other spoons,” Sweeney said, explaining the game. “It’s kind of like musical chairs. You don’t want to be the one not having a spoon.”
With about 10 to 11 teams and 50 people in attendance, the Highsmith Grotto was lively with chatter and the occasional fight for a spoon.
Among those in the tournament was Horace Vanderbilt, a biology student and member of the homecoming court, who wore his royal sash proudly as he participated in the game of spoons.
“I’ve actually never played spoons before,” Vanderbilt said. “I’m just here to have fun. My partner is representing the game room here so I figured I’d come, have fun, play Spoons. There’s a cash prize but that’s not really what I’m about.”
The teams did some preliminary practice rounds to get the hang of the game. According to Vanderbilt, the game is easy once you get used to it.
Another player, Riley Brison, an international studies and political science student, was one of the players who got eliminated in the first round.
“I love Spoons. I love watching it,” Brison said. “I was raised playing Spoons. It’s kind of an extended family thing. Everyone would go bonkers trying to grab the spoons.”
Brison said she doesn’t think UNCA students get as excited about homecoming as other colleges do.
“It might be because homecoming is typically associated with football and we don’t have a football team. I don’t honestly know. I’m not all that pumped about homecoming itself. I’m just pumped about Spoons,” she said.
Regardless, Brison plans on voting for the homecoming royalty and also wants to participate in the laser tag and trivia of the homecoming events.
Delete Image
Align Left
Align Center
Align Right
Align Left
Align Center
Delete Heading