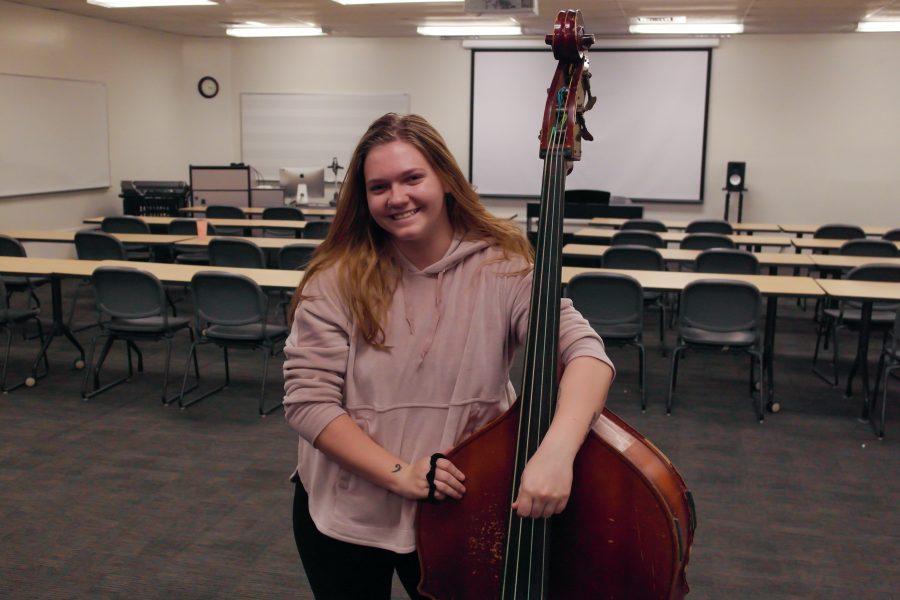 Photo By Ezekiel Ballard Kayla McKinney started the One Voice Project with her mom after she was bul- lied by kids at her middle school.


CW: Sexual assualt and suicide
No one knew what went through Kayla McKinney’s mind, the girl who walked the halls as rumors about her spread like wildfire.
“At the start of middle school there was this older guy who messaged me and hit on me, and one day my mom found it and took it to the police,” McKinney said. “The police told her she helped catch a pedophile they were looking for who recently raped a girl.”
McKinney said after the police heard her story they wanted to have a ceremony honoring her for the help she provided, which would take place in front of her entire middle school.
“I thought ‘Yeah sure why not’ but they read our messages in front of this entire school, talking about how to avoid predators, and I got up in front of everybody and I thought this was such a cool thing to be getting awarded,” McKinney said. “Afterwards, I was sexually harassed a lot and people started saying I was a whore for sleeping with an older man when in reality I hadn’t even had my first kiss yet.”
McKinney said she experienced a lot of hate from her classmates, which resulted in her struggling with depression and suicidal tendencies.
At her middle school, McKinney was not the only one struggling.
“In sixth grade a kid in our school killed himself,” she said.
McKinney said after her classmate’s suicide she wrote a song about his passing.
“When that happened and I wrote that song the community was all very much affected and feeling the exact same way I was,” she said. “That was the first time that I really realized how powerful music is and how much of an impact it can have.”
McKinney said after these events took place it motivated her and her mother to begin The One Voice Project, an anti-bullying music organization.
“It’s all youth artists under 21 and they’re all people that want to use their music to make a difference and impact change,” she said.
The One Voice Project began in West Virginia, but they now take their message and musical talents to schools all across the East Coast.
“We started doing school tours and a few times a year we pick a city and spend a week there, going into their schools and doing workshops with their kids and putting on concerts,” McKinney said. “We start conversations about the environment in their school and how they can impact positive change in their community.”
The One Voice Project also plays music for the children and tells stories of struggles they’ve had in their lives.
“Mine is about my mental health and struggles with that, but we’ve had everything from a girl with a learning disability, to a girl who was hospitalized after an attack, to suicide prevention,” McKinney said.
The One Voice Project partnered with Free2Luv, a national anti-bullying non-profit organization.
“We started partnering with them on our school tours and they give us merchandise like postcards with positive messages on them, wristbands and t-shirts,” McKinney said.
McKinney, now a student at UNC Asheville, continues to travel with The One Voice Project and has even brought their message to local schools in Asheville.
Asheville local Michael Wiseman first came to know the organization during their performance at the annual LEAF Music Festival in Black Mountain.
“We just randomly heard them playing and we were amazed by their musical talent as well as their positive messaging for teens and young adults,” Wiseman said.
He said he approached the group after the show, asking if they would be interested in bringing their message to his daughters’ school in Asheville.
“We reached out to them and they said ‘We would love to but when we come we’d love to also get in front of some other schools and some other kids,’” he said.
The Asheville local said he then decided to reach out to contacts in the community in order to find more audiences for the group.
“We made a whole week out of it and it was great, everybody loved it,” he said.
According to Wiseman the organization’s message proves extremely effective.
“The fact that they’ve all had some experiences in their lives that were challenging and they’re just real and open with the kids and they share their stories of resilience,” he said. “I think it really resonates with the young people.”
The school tour this year is about turning pain into passions and the organization focuses on things that have negatively affected their lives and how they can use those things to make positive change.
“I talk about how I had this hard time in school but now I get to do what I love, I get to play music and tell my story and inspire other people,” McKinney said.
She said The Project One Voice strives to inspire others to make changes in their communities and form similar organizations.
“A lot of times after we leave schools they’ll start clubs themselves,” she said. “There was this one girl at a school in Myrtle Beach who after the show came up to us and said ‘I want to do this. I want to be involved in my community’ and she started an anti-bullying organization in her community.”
According to Volker Frank, professor of sociology at UNCA schools have started to pay more attention and send stronger messages about bullying.
“You walk around in schools and you see signs about reporting bullying and being a bystander. There are a lot more people involved in this issue now,” he said.
The One Voice Project has traveled all across the East Coast inspiring change in schools and communities, McKinney said.
“There’s a lot of youth right now already making differences and becoming activists in their communities,” she said. “I hope to see that grow and continue everywhere.”
Delete Image
Align Left
Align Center
Align Right
Align Left
Align Center
Delete Heading