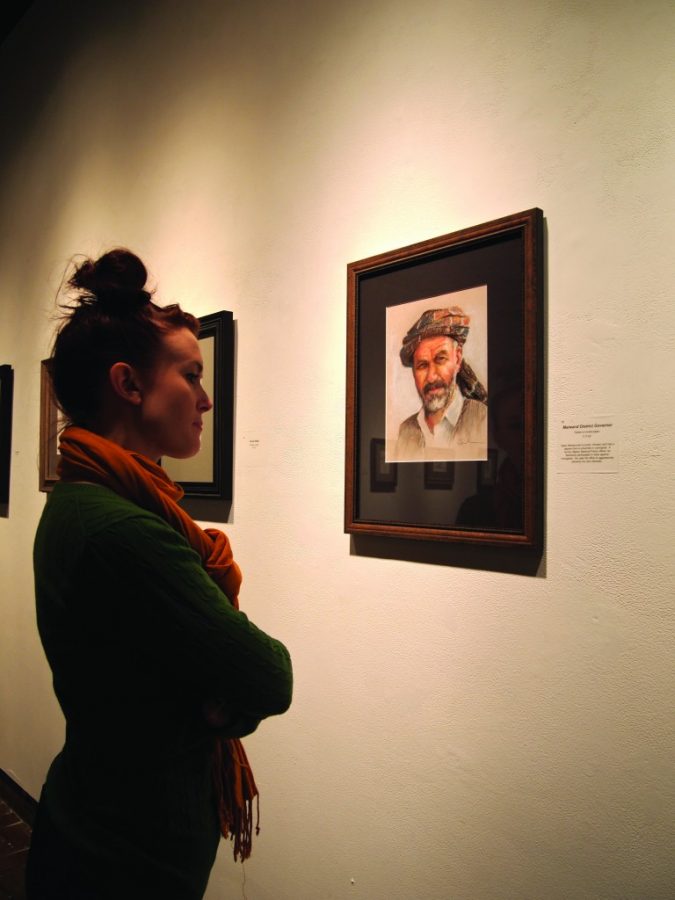 by Jonathan Dermid – [email protected] – Staff Writer
Skip Rohde’s art exhibit, Faces of Afghanistan, takes a different approach to exploring Afghan culture. His work is on display in UNC Asheville’s Owen Hall this month.
This exhibition is an artistic look at individuals of the Afghani culture, but began under very non-artistic circumstances.
“I was working with the Afghan government and leaders in the Kandahar province as an employee of the state department, and basically my job was to work with them and try to get them to be able to improve their capabilities and be able to manage their own affairs. They really didn’t have any government out there until a couple of years ago, because it just wasn’t safe for them to operate out there, so they were still trying to figure it all out. It was definitely a challenge, but it was a lot of fun overall,” said Rohde.


Though his job did not have much to do with artistry, he soon found his background in the arts creeping into his daily work.
“I’ve always been into drawing. I actually graduated from UNC Asheville back in 2003 with a bachelor’s in fine arts after spending 20-plus years in the Navy. So I would be sitting in these meetings called Shuras, which is where civic leaders of districts get together and discuss certain issues, and I wasn’t a speaking partner. Our view as Americans was that if we had to speak in these meetings, then we failed. We wanted the Afghans to be doing everything. We would speak to the key people before and after, but during the meetings, we were just observers. So I’d be sitting there and I would just see these unbelievably good faces for an artist, so I had to start sketching away. Eventually, I had built up a huge stack of drawings, some of them in my drawing tablet that I always had with me, and some even in my government issue notebook that I was supposed to be taking notes in,” Rohde said.
Deciding to use this impromptu pen-and-ink style of art was less of a calculated decision for Rohde than a necessary one, given his limitations.
“I drew with whatever I had. Usually, I had a pen with me. I preferred to draw with a mechanical pencil, because it’s just so comfortable and I didn’t have to think about it. I had some drawing pens with me too. I just used whatever was in my pocket at the time. I really didn’t want the guys I was drawing to know I was drawing them, because if they do, you lose a lot of the naturalness. It’s like when you point a camera at somebody, you start getting the fake smiles and the stiff poses and they lose all their spontaneity, and that’s what I was really trying for,” he said.
Grant Hardy, humanities director and professor of history and religious studies at UNCA, touted this candid style as not only a great reflection of a culture, but also as great historic work.
“It puts a human face on a part of the world that we tend to read about in broad strokes. It’s something I think that good historians do is to try to, with long sweeps of time or big population sets or events that affect hundreds of thousands of people, depict these people as individuals with their own lives and concerns. I think that’s what portraiture does really well is to help see people as individuals,” Hardy said.
Hardy also noted the focus on male figures in the exhibit. “You’ll notice, there are barely any portraits of girls, and I think that says so much about the Afghan society, where men are in the public field much more. I think the art is really well done, it’s simple as can be, but it conveys such a great deal, and the focus of individuality is so great,” Hardy said.
Richard Simpson, a student at Asheville-Buncombe Technical Community College, had similar praise for the exhibit and its message.
“I think the portraits are phenomenally executed, and this work is so important in today’s world, especially with the war coming to an end and our world moving towards being a more globally connected one. The Afghani people need to be respected for their cultural differences and seen as humans first and foremost, not terrorists.”
Interestingly enough, Rohde did not begin the works with the intention of ever presenting them, until someone from his former department at UNCA reached out to him.
“There originally wasn’t a goal for this project. I just wanted to capture these wonderful faces. It didn’t turn into an idea for an exhibition until I already had 40 or 50 of these drawings. The idea actually came about through Suzzy Sams, who works in the art department at UNCA. She basically contacted me about a month before I was due to come home and told me how great the pieces were, and asked if I would be interested in showing them on campus,” Rohde said.
This allowed for Rohde’s cultural message to reach a broader audience than his government notebook, something he finds incredibly important.
“Overall, what I was trying to do was to show that these are people. When you live in the states, it’s really easy to classify these people as illiterate farmers or Taliban or crooks, but when you’re in there with them every day, you realize that they have all the complexities of people over here. Some hate the government, some don’t and some plot against the government. Some are incredibly wealthy and some are dirt poor, and I mean, literally dirt poor. I really just wanted to capture these people as individuals and human beings, so that’s how I decided which ones to include,” Rohde said.
For the future, Rohde hopes to continue to spread a similar message to larger audiences.
“I have some ideas for future projects, and they’ll be a takeoff of what I’m doing here and what I’ve done in the past, so I’m sticking with people. That’s what really floats my boat, trying to tell people’s stories or tell stories with people. As for this show, I’d love to get it seen in other places like other universities and ideally. I’d like to get it up into the Washington, DC, area, because that’s where I really think it needs to be seen,” Rohde said.
The Faces of Afghanistan will be available in the S. Tucker Cooke Gallery in Owen Hall through Nov. 27. Rohde will give a free gallery talk about the exhibit on Thursday.