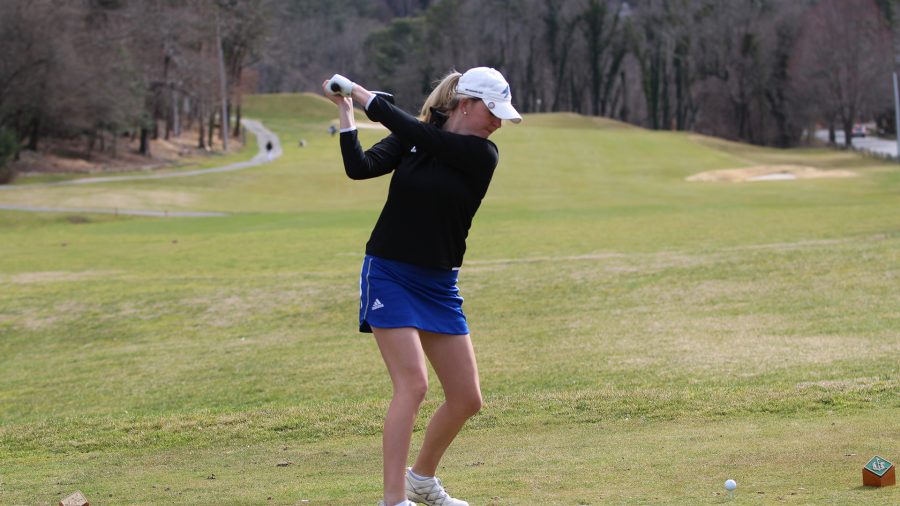 Photo provided by Athletics Department Adelyn Deery tees off during a match. During her four year career at UNC Asheville, Deery played in 37 out of a possible 38 tournaments for the Bulldogs.


The women’s golf program began in 2016 with a team of freshmen, four years later, the now seniors were set to walk in May Commencement, but COVID-19 disrupted those plans.
“I had a couple girls who were having some of their best semesters yet so we had some very sad and bummed seniors,” said Head Coach Ericka Schneider.
Four out of the five current players on the team are seniors, according to Schneider. Six freshmen have been recruited for next year’s season.
“It’s a big milestone moment, being able to graduate your first student-athletes from the program,” Scheider said.
The team ended their season with a tournament at Kiawah Island, Hawaii during the original spring break period.
“Because it was the first graduating class, we wanted to do a special commemorative trip and we chose to go to Hawaii and that happened right before all athletics were put on hold so we were able to go there and do that,” Schneider said.
The whole team was able to play their final conference in Hawaii, according to Schneider.
“It was hard to hear about the cancellations, especially because everything came in waves, but it was nice to end it all in Hawaii,” said Kellen Aslip, a senior player.
The players have been coping with the cancellations by staying in touch with one another, according to senior player Adelyn Deery.
“It’s kinda heartbreaking. It’s sad because being a senior, I wanted to finish out the season strong and since it was our last season but I just kinda keep reminding myself that every athlete is in this position no matter what sport they’re in,” Derry said.
The program planned to host a tournament at their home course, the Cliffs at Walnut Cove in March, but the tournament was ultimately canceled due to COVID-19.
“Our home tournament was going to be our senior night. We were going to have a nice little ceremony. We had a sponsored VIP reception that was planned on the Saturday of the tournament. That was going to be the evening that we were going to announce the seniors and we had their gifts and whatnot,” Scheider said.
The program held its first-ever home tournament last year. Eleven teams came and stayed with local host families for a three-day conference, according to Scheider.
“It takes a village to put that tournament together, and it’s a fabulous tournament that has a lot of moving parts and a lot of helping hands. To see that planning and to have to sit and hold until next year was definitely the thing that bummed me out the most,” Scheider said.
One of the hardest parts about leaving UNC Asheville will be losing the team aspect, according to Deery.
“I’m going to miss the whole atmosphere of it all and always supporting each other and having each other’s backs. It’s been really great knowing you always have someone you can lean on when you need it,” Deery said.
The most difficult part about the sudden cancellations for the coach comes with not being able to be with their team throughout this difficult time, according to Scheider.
“It kills me that we don’t get to be with our student-athletes. We can’t do anything with them right now other than speak to them virtually and not be able to check in on them in person to make sure that they’re doing OK,” Scheider said.
Scheider previously coached at the University of Birmingham and came to UNCA two years ago.
“This is a big impactful moment in their lives and something that they’re gonna remember for the rest of it. Not being able to be there for them in person has probably been the hardest part,” Scheider said.
The most difficult part about being the first class of golf players meant they had no guidance from upperclassmen, according to Aslip.
“We went into it with a brand new coach and six freshmen and we kind of had to make our own path and figure out what worked for us and what didn’t. The hardest part was the adjustment of being in college and not having any upperclassmen to turn to and help us through balancing time management and golfing,” Aslip said.
According to Deery, one of the greatest things about playing at UNC Asheville is the supportive local community.
“It’s been really cool being one of the first players in the program. We always keep talking about how we want to leave a legacy, so it’s been really amazing getting to know the four players who are graduating,” Deery said.
Deery lives in Pennsylvania and originally planned to attend university closer to home, but decided to look at southern schools to pursue a collegiate golf career.
“I was looking at schools and I was going on these visits up North, and there would be like two feet of snow on the ground, and I was like, ‘This is gonna be kinda hard to play golf up here,’” Deery said.
According to Deery, the seniors on the team wanted to leave a legacy with the program.
“It’s been really cool being one of the first players in the program, so it’s been really amazing getting to know the four players who are graduating,” Deery said.
According to Aslip, the aspect of collegiate golf she will miss the most is seeing the other women she played with throughout the last four years.
“Even with this year ending the way it did, I wouldn’t change anything that happened with our team. It’s been one of the best years that we’ve had in terms of having fun and making sure it wasn’t all about results and we did take some time to enjoy our year,” Aslip said.
Delete Image
Align Left
Align Center
Align Right
Align Left
Align Center
Delete Heading