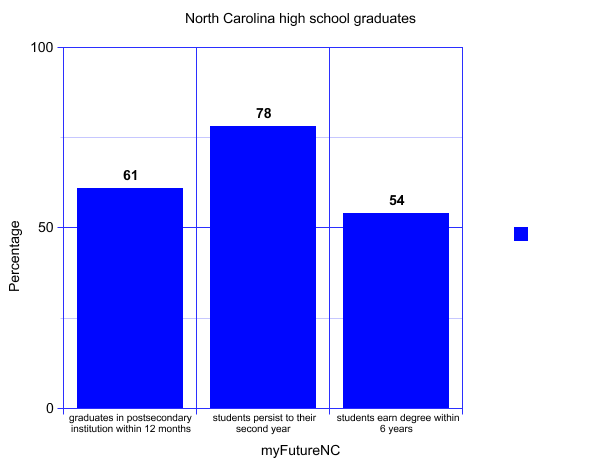 PSFNC found 64 percent of North Carolina’s counties have high rates of child poverty, a factor directly attributable to a readiness gap which worsens as students grow older. Students living in poverty are more likely to not only drop out of college, but possibly never attend.

Erica Abrams Locklear, a professor of English at UNC Asheville, said many rural students receive admonition from their families and communities to not exceed their status when it comes to education.

“This is true for a lot of non-mainstream, disenfranchised communities. It’s not just in Appalachia, it’s true for a lot of urban people too, especially with groups of color, that formal education can represent a kind of break from your family and your community,” she said.

Abrams Locklear said individuality conflicts are common occurrences for rural students transitioning to an environment outside of their hometown. She said many higher learning institutions, even those in Appalachia, subscribe to false portrayals of rural, mountain people.

“It initiates this kind of horrible, painful identity conflict for a lot of people who feel like they have to choose,” Abrams Locklear said. “Either assimilate and sort of forsake where you came from, or do this code-switching thing which is really obvious to family members when you come home.”

With such an impoverished student populace, rural schools see unique problems with academic performance, according to PSFNC. Rural students have lower rates of literacy than their urban and suburban counterparts, an academic discrepancy which can be explained by insufficient funding. Since many rural schools lack adequate funding, rural students also lack adequate college preparation, as revealed through PSFNC’s research.

Child poverty in North Carolina currently sits at 20 percent, according to myFutureNC, a statewide nonprofit focused on improving education through collaboration of North Carolina businesses, educational institutions and government.

Cecila Holden, the president and CEO of myFutureNC, said the organization’s board members come from all levels of the state’s political and economic structure and includes philanthropists, representation from the senate and the UNC system president. She said this combination of leaders allows myFutureNC to act as the link between all levels of education.

“We are positioned well to be the connector across all of the policymakers in the state of North Carolina all the way through to the workforce,” Holden said.

According to Holden, myFutureNC shares their research with local communities so the local institutions can figure out how best to allocate resources.

“We’re state-led but the work has to occur at the ground level and in our local communities,” she said.

Holden said she herself grew up in rural Columbus County, a small community that was once thriving, yet lost much needed business, resulting in a down economy.

“I was very fortunate to have received a good education,” Holden said. “What I’ve seen through my work with the State Board of Education is that rural communities often don’t have as much access to some of the resources that your larger urban areas do.”

For local Owen High School, counselors place a large emphasis on higher education. Rachel McKinnley, an English teacher at Owen High School, said entire classes are shown presentations of which classes to take in order to prepare for secondary education.

“Students also meet individually with counselors,” McKinnley said. “Teachers and others who work at the school are encouraged to share our own college and career experiences.”

McKinnley said both teachers and parents alike hold high expectations for their students, encouraging them to pursue higher education in some form or another.

“No student has ever told me he or she felt pressure to make choices based on how close or far away the opportunity,” McKinnley said.

David Thomspon, the director of student services at Owen High School, added it is the goal of their institution for all students to be career and college ready upon graduation.

“This means that students are prepared to attend post-secondary education required for their chosen field and or begin working in a productive career,” Thompson said.

Since rural schools and communities are typically smaller than their urban counterparts, they often go overlooked by researchers and data collectors. As advocates for diverse and well-funded education, particularly in rural North Carolina, PSFNC compiles these neglected facts.

PSFNC notes that out of North Carolina’s 115 traditional K-12 public school districts, 87 are located in rural counties. As a result, roughly 40 percent of the state’s public school students hail from rural communities. According to PSFNC, these communities run rampant with poverty, providing inadequate resources at home and less access to enriching extracurricular activities outside of school. All of these factors contribute to a gap in preparedness which only worsens as students grow older.

“When you get down to the school level, parent involvement in schools is always very important and having access to quality mentors for students. So when you have schools with more affluent parents where they have the opportunity to be more involved in the school day, that can often lead to better outcomes for that school as compared to those where there’s not as many parents to be able to be involved,” Holden said.

According to Holden, there’s a number of low-performing schools throughout the state, both urban and rural. She said it depends not only on individual school leadership, but also on student’s support at home.

“It’s all going to boil down to the investment that is in place both in the household for the students as well as access to key resources,” Holden said. “Equally important is how are the schools leveraging the resources that they do have?”

Holden said myFutureNC places additional emphasis on completing the FAFSA application in order to close the gaps in secondary attainment. She said there hasn’t yet been as much encouragement for students to complete the application as there should be.

“Research shows that for students who complete that form, they’re more likely to go on to a post-secondary experience because they see college as being affordable for them as well,” Holden said.

Financial inadequacy for students and underfunding for schools characterize many rural institutions. According to PSFNC, North Carolina’s rural districts spend an average of $1,000 less per student than other similarly situated districts in the U.S.

“Funding is always a conversation in our K-12 schools,” Holden said. “The funding can become a conversation starter around quality educators. If you look at the rural areas, the salary and benefits of teachers in our rural areas is often competitive with other positions that require a similar degree. The urban areas have more challenges with competitive compensation because you end up with higher salaries overall.”

Holden said a crucial factor in improving the educational opportunities in North Carolina would simply be to have effective educators in every classroom. She said equally as important as educators are for schools to have quality leadership.

“In regards to quality and effective educators and keeping them in the classroom gets back to leadership and I think where you have strong leadership, people want to work for strong leaders and often compensation is not the number one differentiator in whether or not a teacher stays as much as it is the leadership that they’re working for,” Holden said.

The myFutureNC president said institutions can do everything they can to create a positive culture surrounding teaching professions and to properly do so, going beyond salary, teachers not only need strong leadership, but also support in their schools such as counselors to allow them to focus on the classroom.