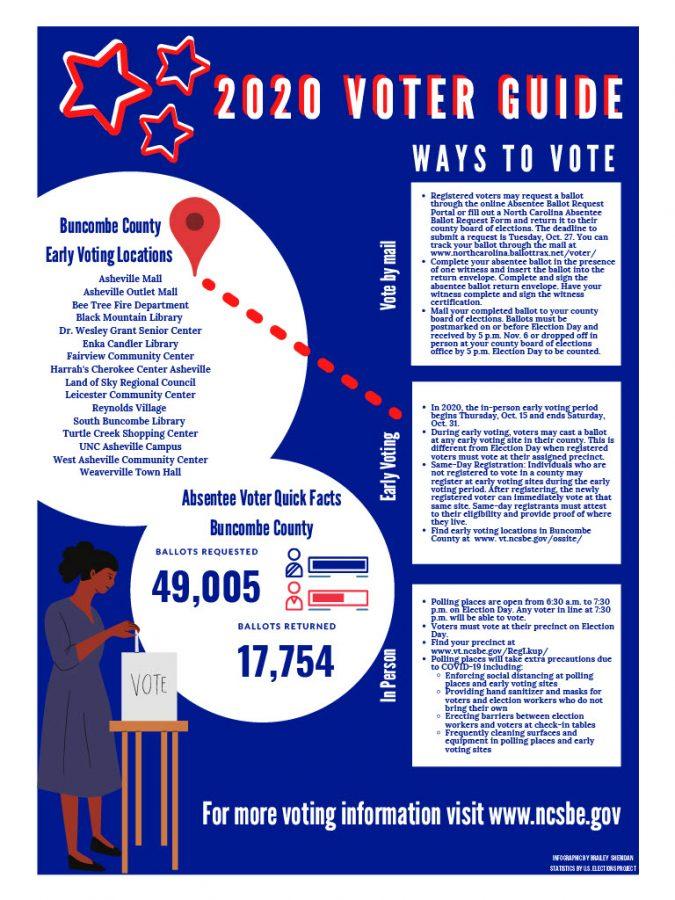 Joe Lehrman
Sports Editor
[email protected]
Buncombe County received an influx of mail-in votes as the state began accepting absentee ballots for the 2020 general election in early September, with Buncombe County already increasing the number of accepted absentee ballots by 175 percent from 2016, according to data provided by the N.C. Board of Elections.
With less than 25 days before the elections, states across the country have begun collecting early voting and votes by mail, with many state governments passing laws making it easier to count and access these voting options as the COVID-19 pandemic continues to make voting in-person on Nov. 3 a daunting prospect. In North Carolina alone, 420,695 mail-in ballots have already been returned, a 110 percent increase from all absentee ballots cast in the 2016 election.
“Massive. Unprecedented. Shocking. It’s extraordinary,” said Department Head of Political Science and Public Affairs at Western Carolina University Chris Cooper. “We’ve already accepted more ballots than we did in all of 2016. Absentee by mail has traditionally been a very small part of the overall makeup of the North Carolina electorate. And that is not true this time.”


A 2017 study by the Brennan Center for Justice found that voter fraud is exceptionally rare in the U.S., with a rate of between 0.00004 and 0.0009 percent. Bahls said these claims of ballot harvesting and fraud should not be concerning and that most methods of voting have bad actors looking to manipulate voters.
“There has to be some sort of integrity in that process. So gerrymandering is just districting done poorly, and intentionally poorly. Just like vote harvesting is registration of voters done poorly,” Bahls said. “I think all of these things are things that should be and can be done. But it just had to be done with integrity.”
According to the US Election Project, voters have already cast 6.7 percent of the total votes counted in the 2016 general election. Six-point five percent of registered voters in North Carolina have already voted in the 2020 election. Buncombe County voter registration increased by more than 6,000 voters since 2016.
This article has been corrected from the print version to more accurately reflect the absentee voting totals from Buncombe County.
Delete Image
Align Left
Align Center
Align Right
Align Left
Align Center
Delete Heading