Students and faculty reflect on online vs. in-person classrooms 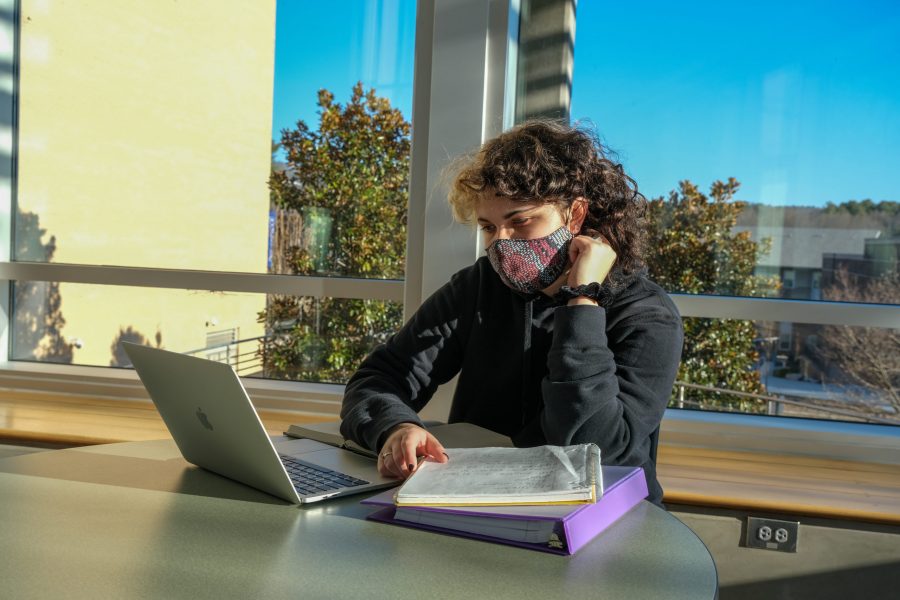 As the spring semester begins, some students and staff at UNC Asheville are remanded to a strictly online format while others attend hybrid courses. Despite the situation, many remain resolute, even hopeful as another semester provides a new opportunity to adapt and overcome.

Evan Johnson, a freshman at UNCA, said one of the five classes he is currently enrolled in is almost completely online while the other four are in person. Johnson takes advantage of the online format for this class by completing his work ahead of time.

“I enjoy this class more online because it gives me more freedom for when I can do my work,” he said about his computer science course.

The ability for students to complete their work at their own pace has allowed greater flexibility in terms of scheduling.

Ken Betsalel, professor in the UNCA political science department, has taught his classes completely online since the university locked down in March 2020 as COVID-19 began to spread rapidly.

“One of the things that I’ve learned over the past year is that online teaching has opened access for students who might not be able to join us,”  Betsalel said. “There’s lots of wonderful things that happen in online Zoom teaching. I’ve had some wonderful encounters with students and classes, and there can be a kind of intimacy even in a Zoom classroom.”

Despite the benefits, Johnson said he learned better in person.

“I’d much rather have fall in person,” Johnson said, “I’m used to learning in a classroom.”

For other students like Ella Lackey, a senior in the english department with a concentration in literature, there is no next semester.

“If it was not my senior year, I think I’d be less sad about online classes because, oh well, next year will be different,” Lackey said.

Lackey chose to take most of her classes online despite her misgivings about completing her degree in such a setting.

“If this wasn’t a pandemic and I had the choice to go safely in person for all of my classes, I would,” she said.

Her choice was made easier by several benefits that only an online environment could provide.

“The reason I chose to do mostly online was because it worked with my schedule and because it’s risky going to campus every single day,” she said.

However, she still misses the peer-to-peer communication that an in-person class afforded her.

“I haven’t made a new friend in a long time, and that makes me kind of sad. Usually in your college classes, the person you sit next to or the person you’re in a group project with, they end up becoming your friend. I haven’t really had that with online,” Lackey said.

The change-up in social dynamics impacted Betsalel as well. For him, the issue persists in teacher to student relationships.

“There’s nothing that replaces the classroom,” Betsalel said.

According to Betsalel, communication breaks down once a video screen divides a student from their professor.

Besides the diminished social aspect of an online class, other issues with the format persist. Many Zoom classrooms are littered with empty screens and silent students. However, professors like Betsalel are pushing back against the silence.

“One of the biggest problems is the student who may be turned off and you can’t necessarily reach them,” Betsalel said. “You can use the chat and certain exercises to be inclusive. Some of those students that you think are turned off are actually present, but they need to be taught in a different way.”

These efforts by the UNCA professors pay dues each subsequent semester.

“Last semester the majority of people had their screens off and didn’t want to talk. This semester, I’ve noticed that a lot more people have their cameras on,” Lackey said.

However, blank screens only comprise part of the problem according to Lackey. Another issue comes with the way professors are adapting to the format.

“In an online class the only thing I’m really doing is sitting there. There’s no activity or task to go along with what we’re doing. It’s like ‘sit here, listen to me talk, and then if you’re brave, unmute yourself and say what you thought,’” she said.

“We’ve spent a lifetime of teaching in the classroom, and the transition is very hard,” Betsalel said. “Sometimes I fail at it miserably, and sometimes it’s difficult to know when you’re succeeding and when you’re not. For many of us this is a new technology, there’s a lot to learn.”

In fact, online settings could push the liberal arts forward as students and professors evolve and rise to new occasions.

“The liberal arts can not only adapt, but it can be innovative and lead in this venue if we have teachers and learners who are willing to embrace it in creative ways,” Betsalel said.