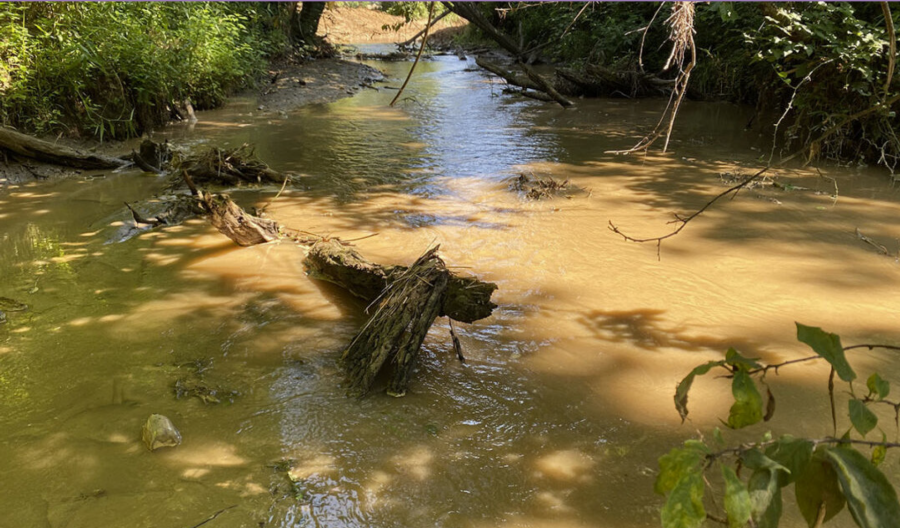 Photo provided by MounainTrue website The French Broad River suffers from pollution due to sewage and trash runoff.

Eager with excitement, 10-year-old Lydia Gates sprung out of bed and pulled on her boots, enthusiastically running through the front door and out into the early morning air to join her father. Gates’s excitement only grew as they drove closer to her favorite place: the lake.

The pair was off to a yearly fishing tournament held by the Sportsman Club of Lincolnton, North Carolina, where young Gates would join dozens of other kids around Horseshoe Lake adorning a free fishing rod and a Rice Krispy Treat in a frenzy to see which kid could reel in the catch of the day.

“I went to cast my rod and it got caught in a tree. I was so excited because I could have swore it went into the water and I had already had a fish,” Gates said. “That day sticks out in my memory as a time that sparked my love for fish.”

Growing up, Gates enjoyed hunting and fishing with her father all the while learning the balance of nature. For every animal they used for food, the value that animal brought to her was not taken for granted. Gates learned at a young age the worth of respecting and protecting the land you reap.

Gates, now a current environmental studies major at UNC Asheville, has a passion for conservation and wildlife. The UNCA student draws upon her passion for wildlife and protecting the balance of nature to master the stimulating courses required by the university for an environmental science degree.

Asheville’s scaly neighbors, the local aquatic life such as the turtles and fish in the French Broad River especially capture the environmental studies major’s heart.

The French Broad River: A history of abuses

Vast and yawning, the French Broad River cuts through Asheville with brown waters running as deep as they have run long. Flowing north to south, the French Broad is considered one of the oldest rivers in the country. On any given sunny day, passing over the French Broad will provide scenes of water-loving people merrymaking across the river in kayaks, paddle boards or even inner tubes.

Coincidentally, the French Broad River suffers from pollution due to point source trash, sewage, sediment and runoff depositing into the watershed. According to data in 2018 from MountainTrue, the upper to middle French Broad Watershed water quality fluctuates between a B and C rating, meaning fish and plant life can vary from mostly healthy to not thriving.

While the French Broad has seen an extensive improvement since the passing of the Clean Water Act of 1972, Landon Davidson, regional supervisor for the Water Quality Regional Operations Section of the North Carolina Division of Water Resources in Asheville, said today, pollutants continue to trend upward and are carried downstream as populations and agriculture shape the land — and this adds significant stress to the water quality.

E. coli, a diverse bacteria found in the intestines of humans and animals, signifies potential fecal contamination and blood-borne pathogens when elevated levels are present in river water. The French Broad River often exceeds the state E. coli standard in some areas after moderate flooding, meaning the French Broad can become dangerous for recreational activities if the polluted water is present on the surface of the skin, is ingested, or contaminates an open wound according to the North Carolina Department of Environmental Quality.

According to data from the North Carolina Department of Environment and Natural Resources and the Division of Water Quality Planning Section, 25 percent of water quality monitoring sites exceeded 400 E. coli colonies per 100 milliliters of river water in 20 percent of samples collected in 2010, meaning fecal bacteria was one of the most widespread stressors of water quality in the French Broad.

Higher levels of pollutants within the French Broad can greatly increase stress upon the organisms living within the river.

“Oxygen consuming untreated wastewater that can rob the water of oxygen can result in a fish kill, or sediment that covers the cobble bottom river portions can remove benthic macro invertebrate habitats,” Davidson said.

The Appalachian Elktoe Mussel that inhabit the French Broad have experienced a great decline due to increased pollution in the watershed. According to Jason Mays, a recovery biologist for the United States Fish and Wildlife Service, the Appalachian Elktoe disappeared from our rivers in the early 20th century due to growing industrial and agricultural waste.

“With the introduction of the Clean Water Act several decades ago, water quality generally improved and in 2002 the Ecusta Paper Mill in Brevard shut down and stopped discharging waste into the river.  Around 2005 biologists saw the first Appalachian Elktoe Mussel has reappeared in the French Broad River and according to Mays, this is unprecedented as the French Broad continues to suffer from industrial and agricultural discharge.

While non-point source pollution such as high bacteria levels are the greatest threat to the quality of the French Broad River’s water, point source litter such as physical trash also threaten the health of the river’s inhabitants and locals.

Amy Rush, UNCA environmental studies student and kayaker has seen her fair share of litter crowding the banks and floating down the rivers she frequents. Rush said she has only been down the French Broad in her trusty green kayak a handful of times and can recall pulling trash out of the river — but filling a kayak with litter can become dangerous and risk a capsize.

“The few times I’ve been down the French Broad, I’ve helped pull a giant truck tire out of the water into a canoe, camping chairs into a ducky, and hats and plastic of all kinds into kayaks,” Rush said. “The rivers in Western North Carolina are extremely beautiful and I hate to see them trashed.”

“When the river rises it almost always sweeps whatever shit is in the River Arts District of Asheville down to Section 9 and affects the recreation,” Huffstutter said. “As far as E. Coli levels —God, Section 9 was once one of the cleanest spots of the river, especially Hot Springs. Even when we’ve had sewage spills in the past it hasn’t been toxic on Section 9, but we still aren’t going rafting.”

French Broad Section 9 runs from Barnard River Park in Marshall, North Carolina through protected lands and ends in the town of Hot Springs. It spans 8.1 miles and is considered a very popular spot for tourists, local lovers of kayaking and water recreation alike, according to the National Rivers Project.

Local volunteers devote their time to cleaning up the river

Among the people engaging in recreational activities on any given sunlit day along the wide river, you may happen to notice teams of brightly-vested volunteers in boats collecting trash within the river. These folks volunteer with Asheville GreenWorks, the most active environmental non-profit organization in the Southeast, according to the director of operations.

“On a typical year when we are not in the middle of a pandemic, we run over 220 projects a year,” Eric Bradford, director of operations at Asheville GreenWorks said.

Asheville GreenWorks concentrates on three focus areas: urban forestry, waste reduction and water quality. In the summer, the organization runs more than 40 river cleanups using a fleet of boats and around a thousand volunteers to collect about 60,000 pounds of trash out of the French Broad per year.

The non-profit organization continually runs events throughout the year and urges volunteers to join their efforts in cleaning up Asheville’s urban areas, forests, and rivers.

While passionate volunteers make up the heart of conservation in Asheville, the director of operations for Asheville GreenWorks said legislation is the most potent tool for change in the environmental sector.

Before amendments were added to the Clean Water Act, Asheville was home to many businesses alongside the French Broad which were permitted to dump unfiltered effluents into the river for years, greatly impacting the quality of the water and the health of the wildlife.

As environmental protection laws have increased, there are currently no businesses permitted to dump unfiltered waste into the rivers and streams and organizations like Asheville GreenWorks are continually cleaning out point source litter.

The French Broad River has seen a tremendous increase in the quality of the water as legislation and organizations have focused on its recovery. However, Bradford said the river still suffers from leaky sewage pipes lazily placed under the French Broad and significant flooding credited to climate change.

Climate change doesn’t just affect glaciers up at the North Pole, it impacts Asheville — and it is happening now. As the Earth’s weather patterns become more erratic and Appalachia faces extensive flash flooding, excess water has no place to go but into our rivers. Mass deforestation that loosens sediments and trash littered about are carried by flood waters quickly into the closest body of water, which for this area, is often the French Broad, according to Bradford.

“The problem is, those small tributaries flow into larger waterways. So, you know there’s people fighting this battle all over the United States right now and we are fighting it locally,” Bradford said.

According to Bradford, local support through volunteering, advocacy and electing officials who will uphold and pass effective environmental protection legislation is the most potent way to maintain the health of our rivers, forests and wildlife.

Davidson said residents and locals are a powerful advocate for the protection of the French Broad River and it is vital to understand both the aesthetic and economic benefit it provides to the Asheville region.

“The French Broad River is a very special resource that deserves protection and care for and by local residents. The waters of the French Broad are owned by the citizens of North Carolina, the same individuals that can affect the greatest positive impact on the water quality,” Davidson said.

There is hope for a cleaner future

The very same little girl who found her passion for aquatic life after catching the biggest tree at her local fishing tournament now plans to devote her time to protecting our natural resources in Western North Carolina.

Gates said her dream job would be to work for the state or an organization devoted to fish and wildlife care and preservation and aid in the conservation of the Appalachian environment. She said she feels all people are born with free will, but plans to use hers to protect what the Earth offers us.

“I think people have the freedom to treat the land how they want, but that doesn’t mean it doesn’t come with consequences,” Gates said. “You reap what you sow, and these people who trash our rivers and big companies that put waste in our rivers, they are doing it to themselves and ruining life for future generations.”