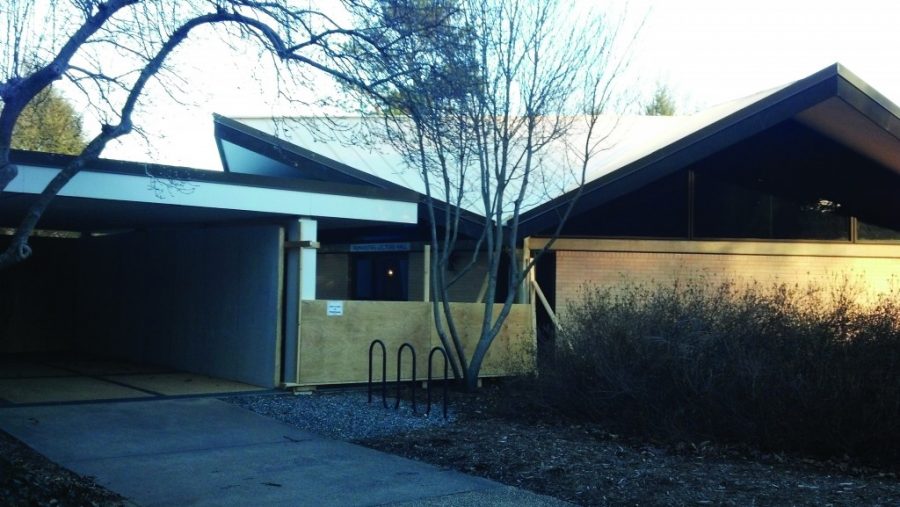 by: Shanee Simhoni – Staff Writer – [email protected]
Roof repairs and a musty smell spurred the beginning of a long-overdue cleaning and renovation of the Humanities Lecture Hall, one of UNC Asheville’s most distinct larger spaces, according to university officials.
“Back in the middle of 2011, somewhere in there, we started getting a lot of complaints of odor issues in the Humanities Lecture Hall,” said David Todd, the director of facilities management and planning at UNCA.  “Other than the few leaks coming into the building that we had contained, we couldn’t find anything, couldn’t see anything.”
After the repairs on the roof last summer, as well as extensive cleaning, the odor persisted, said Todd, an Asheville native.
“We had an indoor air quality assessment done,” Todd said.  “They ran their test, and the results of the test came back and indicated that there was evidence of mold in the plaster material applied to the ceiling, inside of the seat cushions, in the carpet and in the HVAC ductwork.”
The tests indicated the mold count in the ambient air totaled less than one-third of the amount in the outside air.  However, Carmichael Hall showed no signs of mold after some minor renovations and cleaning, according to the industrial hygienists conducting the tests.
“We had them take core samples out of the ceiling material, we had them actually cut up a section of the carpet, we had them remove a seat cushion and we had them run inspection tools down to the ductwork and put out what they call spore traps,” Todd said.
UNCA viewed the situation in the Humanities Lecture Hall as a priority and decided to take action, according to Todd.
“Extensive air quality test reports have shown no imminent health risks in the building,” Provost and VCAA Jane Fernandes said in an email announcement in October.  “Out of an abundance of caution, I have decided to relocate classes to other spaces on campus.”
UNCA has only four large areas available for lectures: Lipinsky Auditorium, Rhodes-Robinson Hall room 125, Karpen Hall room 38 and the Humanities Lecture Hall, according to Patricia


McClellan, the assistant provost for academic administration.
“I am writing to make certain that you are aware that the Monday lecture for Humanities 124 classes has been moved from HLH 139 to Rhoades/Robinson (RRO) 125.  This change is effective Monday, October 15th, and will continue for the remainder of the semester,” said McClellan in an email sent to students last fall.
Rhodes-Robinson room 125 has approximately half the amount of seats as the Humanities Lecture Hall, resulting in some humanities sections being moved to different rooms and night classes ending as late as 9:30 p.m., according to UNCA data.
“It seemed more precautionary than reactionary,” said Joseph Baker, a sophomore who attended the humanities lectures last semester.  “It was just a little bit more crammed, but everyone still attended the lectures.”
In addition to sections of Humanities 124, 214, 324 and 414, the closing of the Humanities Lecture Hall affected some art lectures, which relocated to a significantly smaller room in Karpen.
“It was of concern to me, because for the fall, I’m over at the art department, and the art department was holding its large first-year classes there,” said Gwen Ashburn, the dean of humanities and professor at UNCA.  “I certainly understood the decision.”
The Humanities Lecture Hall, built in 1966, gives the university character, said Ashburn, a literature professor.
“I’m glad we are renovating it again.  It’s a funny-looking little building.  It looks like 1960s when this campus was built, and it gives us a small lecture hall that we need,” Ashburn said.
In the 1960s, buildings had different standards and technology than today’s structures, including improved insulation, window seals, how hot and cold air transfers and circulates and the construction of the walls, according to Todd.
“The HVAC system that was put in at the time, that design of system, doesn’t have any kind of dehumidification or anything like that associated with it.  It’s able to provide cold air or hot air, and that’s pretty much it,” Todd said.  “The windows in that particular building, in comparison to today’s standards, are a lot more porous design.”
The heating portion of the HVAC system, a part of the original construction of the building more than 40 years ago, contributed to the mold problem, as well as numerous other factors, according to Todd.
“The roof leaking probably contributed to the mold we found in the plaster on the ceiling.  The seats, frankly, probably from mid-‘60s to now, that’s 40 plus years of operation, of all kinds of people sitting on the seats.  You come in soaking wet from a rainstorm and sit down on the seat, that type of thing,” said Todd, a resident of Fletcher.
Included in the renovations will be a new HVAC system with dehumidification technology, replacement of the carpeting, either partial or complete restoration of the seats, a thorough cleaning of the ductwork using a biocide to eliminate the mold and replacement of portions of the ceiling, including asbestos abatement, according to Todd.
“Because of the age of the building, it was built using asbestos-containing products, so all of the materials on the ceiling contain asbestos, and they have to be abated,” Todd said.  “Same thing is true with the floor tile under where the carpet is.”
Asbestos abatement entails sealing the building prior to the removal of all asbestos-containing material, performed in a negative vacuum environment to ensure no particles escape the immediate area.  Both Carmichael Hall and the Humanities Lecture Hall received this treatment, according to Todd.
“It seems that the air quality in Carmichael was fine after the new roof,” said Ashburn, an eastern North Carolina native. “Not in the Humanities Lecture Hall.”
Students need not worry about any changes in tuition or fees due to the project, according to Todd.
“The state of North Carolina, for all state-owned buildings, provides repair and renovation dollars,” Todd said. “The university views this as a priority need.  We would like to have that space back where students can use it and occupy it, so that’s why we’re putting the dollars there.”
Todd estimates the total cost, after the completion of the renovation, to be approximately $350,000, and can be expected to reopen by the end of this summer.
“Considering how many students are required to have classes there, we should have never been in there last semester to begin with,” said Sydney Masingill, a management student who attended Humanities 124 lectures last semester.
After completion, Humanities Lecture Hall will be a pleasant, safe space to occupy, according to both students and staff.
“We will again test the air quality before reopening the building, and look forward to making a ‘new and improved’ Humanities Lecture Hall available for use by the campus community for fall semester 2013,” said Fernandes in a recent email announcement.
Delete Image
Align Left
Align Center
Align Right
Align Left
Align Center
Delete Heading