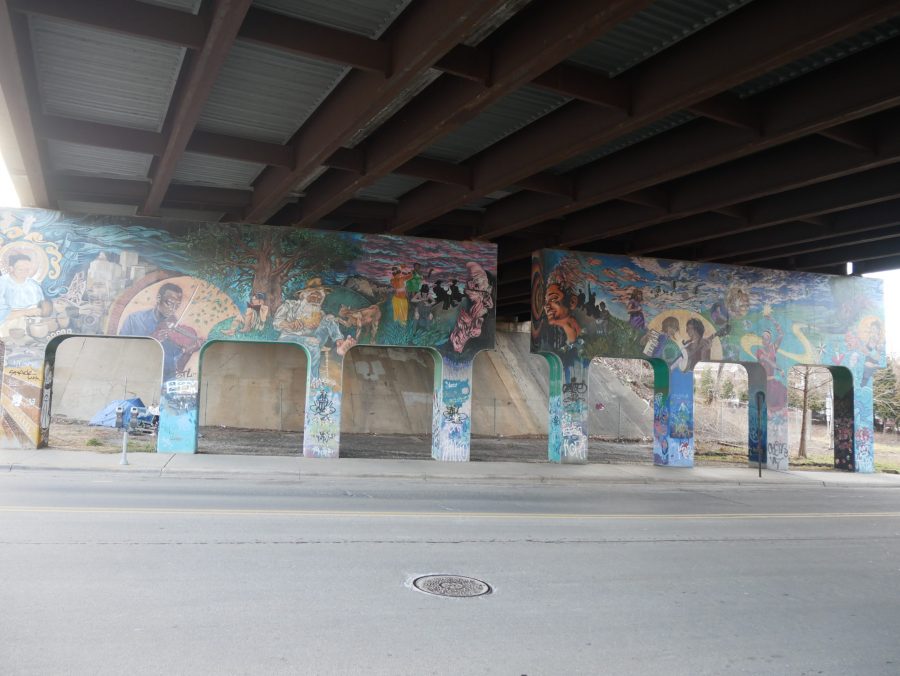 Photo by Camryn Mickan The former unhoused encampment located under I-240 remains cleared of housless individuals after the city’s removal.

On Feb. 1, a homeless encampment was removed from under I-240 on North Lexington Street against city practice and CDC regulations, inciting outrage and advocacy from local community leaders and organizations.

“These are cruel and inhumane actions, they create more instability for people on the streets who need more stability and to be able to get off the street. These actions make very little sense when it comes to the policies, particularly in our city around ending homelessness,” Amy Cantrell, co-director of BeLoved Asheville said.

Cantrell said BeLoved Asheville, a non-profit aimed at creating innovative solutions to systemic racism, food and housing insecurity and health inequities, was called in for an investigation by the North Carolina Department of Transportation and Asheville city government after the event occurred.

“We were just trying to figure out what was going on,” she said.

Ponkho Bermejo, another co-director for BeLoved Asheville, said the days leading up to the removal of the encampment under the bridge on North Lexington Street were normal as his team visited various campsites in Asheville and handed out survival kits for the winter weather and shared health information about COVID-19. Bermejo said he visited the camp of about 10 people under the bridge before it was removed.

“One of our friends asked us if we could find shoes in the size number 12 because the shoes he had were a size number 10 and he wasn’t able to find a donation in a place where they donate shoes that would fit him. So, he was walking around in a 10,” he said.

The BeLoved co-director said on Feb. 1, his team found a new pair of size twelve shoes for the man living under the bridge and when they went to take them to him around 4 p.m., they began receiving messages that something was wrong under the bridge.

“When we came to under the bridge on Lexington, we saw that all of the camps had been removed. We started talking to the people we know and asking around about what happened,” Bermejo said.

From there, BeLoved started creating awareness and sharing the story about the event on social media. According to Bermejo, the issue became popular quickly and the city received numerous emails from outraged people in response to the event.

Cantrell said while the search for the dispersed people continued, she was speaking to a state senator who had communicated with the North Carolina Department of Transportation about the action, the Asheville mayor’s office and the city’s office.

“We negotiated seven years ago a seven day notice to evict on city property because of sweeps that had happened during that time. We did some vigorous advocacy to get that notice to happen. We knew that was the policy on city property, but this was NCDOT property,” Cantrell said.

Robert Stevenson, outreach case manager at Homeward Bound, an organization in Asheville aimed at getting people experiencing homelessness into housing solutions, said the city suspended the seven day policy unless a campsite posed an imminent risk to preserve the shelter-in-place guidelines provided by the CDC.

According to the CDC, encampments should not be cleared because it can cause people sheltering in place to disperse and increase the potential spread of COVID-19 and break connections with health and safety service providers. The CDC recommends that communities ensure encampments have proper sanitation, are provided with hygiene products and encourage people to space out their sleeping quarters.

“The city was actually not the ones who evicted the people from under the bridge. But, they were talking about it even before it happened. They were in touch with me about going down and I had even gone down there and notified folks that they would probably be asked to leave in the near future,” Stevenson said.

The outreach case manager said the city was planning to justify the removal because of safety issues the encampment posed near the interstate, but the North Carolina Department of Transportation evicted the campsite first.

“The response to a campsite has a lot to do with where it is and the legality of the property, and things like that. So, these folks were on DOT property and that area technically comes under the jurisdiction of the Department of Transportation which is a state run organization,” he said.

Stevenson said there was a lack of communication between the city, Homeward Bound and the Asheville police department and the North Carolina Department of Transportation makes their own decisions independent of the city.

“Most folks staying outside are pretty familiar with the drill. I think for the public this might have been the first time folks saw what looked like DOT running people off. But this, frankly, even before the pandemic, happened pretty regularly,” he said.

Cantrell said after they discovered the people under the bridge scattered, two members of the BeLoved Asheville team looked for them late into the night on what was then the coldest night of the year. The city immediately issued a statement saying the removal of the encampment did not follow their policy and initiated an investigation, according to Cantrell.

“This was a cruel and unconscionable action that put people at risk of life and death. That was our first concern, trying to find our friends that lived under the bridge. For days we couldn’t find them,” she said. “It was done because they said it was a safety hazard and yet they put people’s safety at deep risk, particularly that night.”

According to BeLoved Asheville, the wind was blowing up to 50 miles per hour and there was a wind chill of seven degrees on Feb. 1 and code purple was called.

“There has been a policy for quite a while now called code purple, which is essentially if it is forecasted to be 32 degrees or less on a given night then a local group, the Homeless Coalition, are empowered to call code purple,” he said.

Stevenson said historically when code purple was called, an agreement between local shelters and the Homeless Coalition made it possible for people living outside to stay in the shelters with a less rigorous process in order to keep people from being out in the cold. Because of COVID-19 restrictions, code purple was put on hold for several months last spring, according to Stevenson.

Stevenson said code purple has recently been called during the winter months, but it is still not a guarantee for a person experiencing homelessness to be admitted into a shelter on a freezing night.

BeLoved Asheville co-directors said they have been keeping up vigorous advocacy at the local and state level in response to this event and have earned some success.

The BeLoved Asheville co-director said the notice to the DOT divisions is the first success in their campaign as a statewide victory.

“We have been pressing the city manager here and the assistant city manager around creating legal places to camp as right now we don’t have enough shelter and we emphasized that. Our folks don’t have anywhere they can legally be after 10 p.m.,” she said.

The organization’s co-directors said they plan to continue to press city and state officials for housing justice and use their position in the community and stories as advocacy.

“The most powerful thing we can have right now is having these kinds of stories out. This is not the first thing that’s happened and it probably won’t be the last. Only bringing awareness to this situation is making people aware. And we have been fighting for many years,” Bermejo said.

Rev. Brian Combs of the Haywood Street Congregation, a United Methodist Mission Congregation located in downtown Asheville, said he knew the people living under the bridge at the time of the removal and that it is routine for camps to be uprooted and people to be displaced.

“We are disappointed in the DOT’s action, as many people have said, we are in the middle of a pandemic and it was a code purple night which means it was under 32 degrees. And we know those folks, a couple of them in particular. One is actually staying with us at Respite right now, which I am thankful for,” Combs said.

Haywood Street Respite, a shelter operated by the Haywood Street Congregation, houses up to eight people who can have a safe place to rest and get three meals a day. The Haywood Street congregation also currently offers to-go style meals free of cost on Wednesdays and Sundays through the Downtown Welcome Table ministry.

“To take away someone’s ability to survive is not just regrettable but unconscionable,” he said.

Combs said he understands the difficult position city leaders and the North Carolina Department of Transportation are put in when they have to carry out laws they didn’t create and don’t always agree with.

Combs said the laws that have been put in place are often created to make homelessness a crime and further prolong the struggles of people who are experiencing homelessness.

“There is so much duplicity in our laws and I routinely hear people on the street say that these laws make them feel like they are not wanted. It would be hard to argue how someone wouldn’t come to that conclusion if so much of their day to day experience is trying to make it to the next breath and on top of that they’re trying to negotiate all of these laws that make it harder to survive,” he said.

The Haywood Street Congregation leader said UNC Asheville’s campus can support the end to homelessness by exercising their right to advocate for affordable housing to the city council.

“Folks can even do a drive on campus to collect sleeping bags, tents and other needed items. We can get information to anyone who wants to do a drive,” she said.

Stevenson said education is key in solving the housing crisis and learning about how historically economic issues, gentrification, redlining practices and the displacement of African American communities have taken place in Asheville.

“That is really my main thing students can do: you guys are there and getting educated so take the time to educate yourself further and see how personal choices you and we all make in our own lives affect these things,” he said.