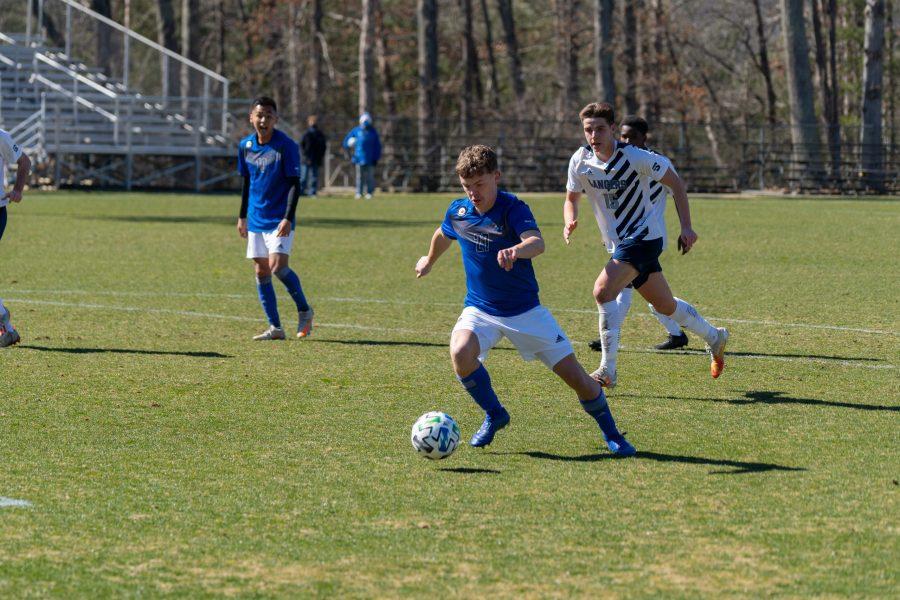 After over a year, members of the UNC Asheville men’s soccer team finally laced up their cleats and took the field for competition, and the team capitalized on the long-relished opportunity.

The Bulldogs opened up the 2021 spring season on a high note with a 2-1 win over conference foe Longwood on Feb. 21. It marked the first in-season competition the team played  since Nov. 6, 2019 when the Bulldogs took down Presbyterian in their 2019 season finale. The postponement of the fall sports season by the Big South Conference in 2020 due to the COVID-19 pandemic moved most fall sports competition – including men’s soccer – to this spring.

Coming away with a win in the long-awaited return to competition served as an important confidence booster for UNCA men’s soccer.

“It was a real long time coming,” said Conor Behan, a freshman midfielder. “I think the whole group was really excited to just get out there and get playing and everyone couldn’t wait for it. To start off with a win was really good.”

Behan scored a goal assisted by junior Miles Peay in the 53rd minute to put the Bulldogs up 1-0, and the team ceased to let go of the lead for the remainder of the game. An error by Longwood led to an own goal and increased UNCA’s lead to 2-0 in the 59th minute, but the Lancers managed to score a free-kick shortly afterward to get on the scoreboard. Longwood failed to capitalize on two critical corner kicks in the last minute of the game, allowing the Bulldogs to sneak away with the 2-1 win.

UNCA held a 7-4 advantage over Longwood in shots, with three of those shots on goal compared to Longwood’s two. UNCA’s freshman goalkeeper Leon Musial also made a strong college debut with one save and solid defensive play in the net to hold Longwood to just one goal.

The win over Longwood marked UNCA’s first 1-0 start to a season since 2015 when the Bulldogs defeated USC Upstate to open fall competition.

With a key win under the team’s belt, Peay said he and his teammates hope to use the momentum from the game to keep succeeding during the rest of the shortened, eight-game season.

“It’s a good first step for us to start off with a win and we think that we can do it again,” Peay said.

The team also played for the first time in regular season competition under new Coach Mick Giordano, who became interim head coach last February after UNCA Athletic Director Janet Cone promoted him from his role as an assistant coach. Peay said the team enjoyed implementing Giordano’s new system of play out on the field finally seeing positive results from their hard work in the fall offseason.

“What went well with the game was we could really feel the progression with our team and our new system,” Peay said. “It was really nice to get out there and see it work and see the results of the work we’ve been putting in.”

For Giordano, he said he enjoyed seeing his players find success out on the field for the first time in a year, despite some of the team’s imperfect moments during the win.

“You can always pick out some moment that we need to be sharper with and we need to be better with, and we’re still trying to get some of our match fitness in,” Giordano said. “But ultimately, I think the most important part is that they were rewarded for their hard work and the group was rewarded with a positive result, which was certainly needed after such a long time off.”

Behan’s key performance during the opening week of play earned him Big South Freshman of the Week honors. Putting together an impressive statline with one goal and two of the team’s three shots on goal, the midfielder from Dublin, Ireland, said he appreciated the award and hopes to continue succeeding out on the soccer field.

“It was nice to get some recognition from the conference in the first game and it’s something that I want to get again,” Behan said. “I’ve got to keep building on that. I was just delighted with it.”

The game against Longwood also gave players a sense of normalcy during an otherwise atypical time.

With the COVID-19 pandemic affecting athletic play, schooling and almost all aspects of college life, Peay said finally playing in a game with his teammates felt relieving.

“It felt nice to just be able to play a game,” Peay said. “I can’t even remember the last time we played, so that was pretty cool.”

Looking forward, UNCA men’s soccer awaits six games against conference competition during the remainder of the spring season. Peay said the team needs to keep entering each game with high confidence levels that the team built upon with their motivating win in the season opener.

“We’ve just got to build on it and make sure that we come with the same energy, just ready to perform every game,” Peay said.