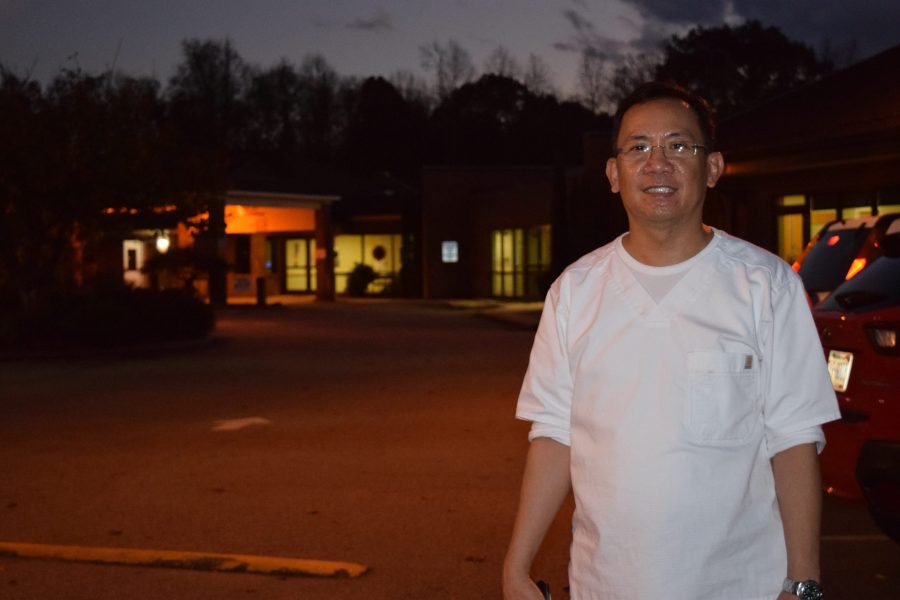 In a dazed rush to evacuate her home, Andrea Depao packs only her uniforms, work essentials and gets dropped off at her new accommodations. As she opens the door, cobwebs and dust greet her as she enters the empty home.

The day before, she lived with her sister, her sister’s husband, her nephew, two nieces, their dog and her elderly father. Now she lives down the street in a house with three bedrooms, two bathrooms, a six-person dining table, two sofas and a lonely dog.

An outbreak of COVID-19 affected staff and residents at Aston Park Health Care Center in May. At the time, half of the cases in North Carolina came from long-term care facilities.

“My biggest fear in COVID is I will die. I was waiting if in case that would happen and well, I can not do anything. If I die, I die. That’s it, that’s the end of my world,” Depao said.

She received a call from her employer in May, telling her she tested positive for COVID-19.

“My expression is I got COVID forever, because people don’t want to come near me,” she said.

Her eyes shift away and her voice softens as she recalls her two weeks in isolation.

“It’s kind of scary. I got too much anxiety because when we watched the television regarding COVID, everything is ‘when you get it you’re going to die,’” Depao said.

After arriving at her new home and with her mind racing, she decides to clean. After cleaning, she explores the house and familiarizes herself with each of the foreign rooms.

On the third day she finds a new companion in Marky, a cautious chihuahua. She cradles and praises him for comforting her back then.

As she sits at the dining table meant for six, her hands instinctively pet Marky as she talks about her family.

“You are kind of isolated. It’s kind of depressing because it’s like, you’ve got COVID and they don’t have it and you’re by yourself,” she said. “I’m not happy anymore. Not comfortable. It’s kind of scary and I’m depressed.”

After two weeks of fighting the virus, Depao returned to work, where she faced new challenges in an environment where eyes lingered and a six-foot distance became a blessing.

“They don’t want to go near me. They say, ‘Well you already got COVID, we don’t have it yet,’” she said. “There’s a distance between us.”

Day after day she watched as the number of residents in her hall dwindled, leaving only empty beds and cherished names on the door.

“Five in one day. We have less and less residents,” she said. “I saw them, they don’t have oxygen, they’re turning blue, they’re dying. I pity them.”

After seeing the residents die, she questioned her own morality.

“I was that person who got COVID. I’m isolated and nobody wants to see me, including my family. They don’t want to see me. When I die, I die by myself, alone,” Depao said. “They just claim my ashes and that’s it.”

After two months and with the help of negative tests, Depao gained the

trust of her coworkers, but the feelings of ostracization still linger.

happening with me. I get COVID okay, I got COVID. They don’t want to get near me. It’s kind of depressing,” she said.

After a month of living in her new house, Depao adjusted to her new home, finding comfort in Marky and her newfound privacy.

At the age of 17, Celia Gudger watched a nurse give a presentation and a passion for nursing slowly developed within her. Now she’s 21 and works with COVID-19 patients in Mission Hospital’s pulmonary unit.

In Buncombe County, 12 residents tested positive for COVID-19 on March 24, 2020, and six days later, the number jumped to 21 residents.

Every two to four hours she did her rounds. She put on her personal protective equipment, entered a patient’s room, took their vitals and helped them to the bathroom. She checked in on them and left, unable to do much to ease their pain.

“We were used to having patients for that long, but it was frustrating because you would be like, ‘well, what else can we do for this person?’ But sometimes it’s just about waiting,” Gudger said.

In late March, she encountered her first patient with COVID-19. As she prepared to treat them, her thoughts blended into a mixture of fear and excitement.

“I remember being kind of scared when I first took care of him, but I also felt super important, like I was actually a frontline worker,” she said.

The fear and excitement faded as the patient’s health declined. She offered them her phone to make a final call, wrapping it cautiously in plastic and tape.

“We couldn’t get our iPads to work that day, so I said screw it, he can just use my phone,” Gudger said. “All he wanted to do was FaceTime his wife before he passed away.”

Weary of what they may contain, she changed her scrubs, shoes and bathed her phone in bleach before stepping into her car. Then she drove home, showered and shut herself in her room.

“I couldn’t see my friends for a long time until people felt a little more comfortable around me,” she said. “I would get sad some nights wishing to be around people, but I knew I needed to isolate.”

Her experience with her patients and reclusion from friends and family contributed to her fear of isolation.

“I’m good with being independent, but I can’t deal with being the only person in a room,” she said.

Eventually, Gudger and her unit successfully treated their first patient.

“That felt like such a huge victory,” she said.

As the weeks passed, more patients entered her unit, each bearing their own burden. Her tone slows as she recalls a dilemma she faced while caring for a patient whose family opposed her wish for hospice care.

“That entire week was just frustrating because I was tired of seeing patients not get what they wanted and having them die without any family there,” she said.

As Gudger treated more patients, her frustration with the inability to help them grew.

“All of our patients were dying, we could not keep people out of ICU,” she said. “We are the only ones who are there to hold their hands when they pass away.”

Eventually she adjusted to the shifting waves of patients, but the pain of their isolation remained with her.

“I hate it. I hate it so much,” she said. “It’s tough because you know they want to see the people that they are close with. We try to talk with them and get them entertained as best we can.”

“You can help make them better. Not only with medications, but you sit down with them and it’s the first time that they’ve been able to talk to someone in months,” she said. “They have had things bottled up for so long and you can finally talk with them and they feel so much better.”

A nurse stands hesitantly in front of a resident’s room. His glasses fog as he takes a breath. He enters the room and swabs the patient. He leaves and continues working, his mind clouded with anxiety in anticipation of the results.

The strenuous battle against COVID-19 begins when he learns three days later that three of his residents test positive for the virus, his fears etching closer to reality.

Noel Chavez, a 50-year-old nurse at Aston Park Health Care Center, recalls the outbreak that occurred in May.

“I was the one who collected the specimen for the first three positive cases. After that they do not want to come near me. If I’m in the room, they are going to wait, or go outside, because they are afraid that I’m already infected,” he said.

His tone softens and he pauses as he talks about the death of one of his patients.

“I do my rounds, and they are just lying there not breathing,” he said.

He pronounced the patient dead, filled out the paperwork and wheeled the body outside to an awaiting hearse.

“They are so scared, and they do not want to come into the building,” he said.

Chavez repeated the process for a second resident. He declared them dead, filled out the paperwork and wheeled the body to the hearse. Relieved of his duties, he avoids wheeling out a third body.

“The family decided, before it happens, what they want to do with their loved ones,” he said. “That’s the only thing that’s made my work easy.”

He then returned to his home, his only shelter from the virus. Strictly leaving only for groceries.

“I grew up very sickly,” Chavez said. “I don’t know the extent of the virus if it hits me.”

Cautious about his health, he keeps a vigilant watch on his condition.

“Living by yourself, you need to be more careful because there’s nobody to lean on if you get sick,” he said.

As Chavez continued working, his coworkers began vanishing, some starting their personal battles with the virus and others leaving out of fear.

Gripped with fear, he takes a mixture of supplements in hopes of boosting his immune system.

“You just don’t know what your reaction will be,” he said.

The absence of coworkers and friends quickly impacted Chavez and those who remained.

“The ratio of staffing to a resident is so many that they are no longer making their rounds as it should be,” he said. “It’s so pitiful for one staff to take care of so many people.”

As the days continued, tensions rose and disagreements erupted.

“It only makes it harder if you disagree. I learned from this job that being vocal does not give to a better work environment,” he said.

Memories of laughter and camaraderie faded as precaution and social distancing filled the gaps made by absent workers.

“We can no longer talk or go to a room at the same time. You are only allowed to go one at a time to observe social distancing, even in the lunch area you need to occupy one table separate from one another,” he said.

Being one of the first nursing homes with an outbreak of COVID-19, the facility received extensive support from the community.

“The outpouring of support was overwhelming. It’s very touching,” he said. “When you enter this kind of work, it’s a calling.”