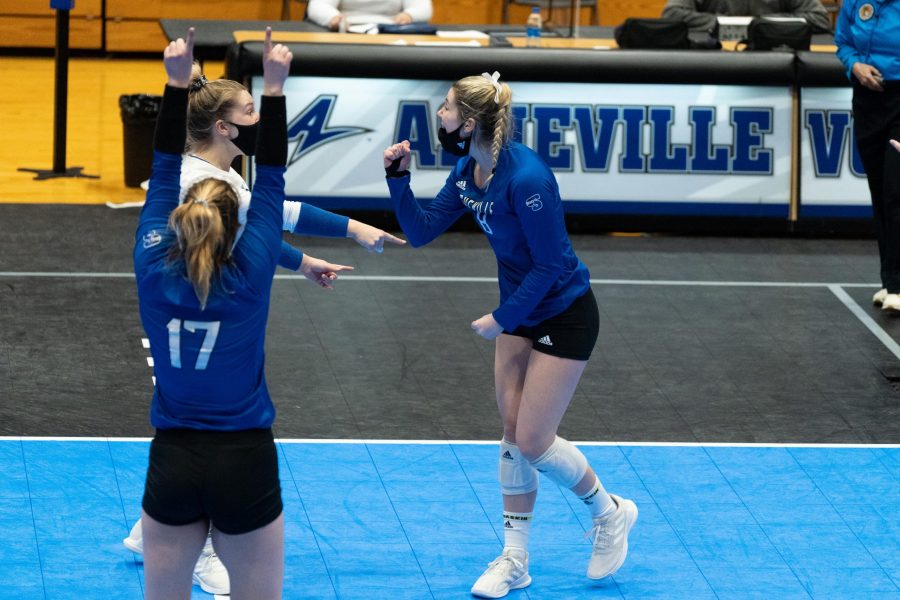 Returning to competition after over a year off from competitive play due to the COVID-19 pandemic has produced it’s fair share of obstacles for the UNC Asheville women’s volleyball team.

“Coming back to competition after not playing for so long has had its ups and downs,” said Peyton McClinton, a junior outside hitter.

The team had to make a series of adjustments, from following strict COVID-19 protocols to getting back in competitive shape. But now back in season this spring, after the Big South conference postponed the traditional fall 2020 competition season, McClinton said the Bulldogs could not feel happier to get back on the court.

“It was hard to adjust to wearing the masks while playing, but we got used to it,” McClinton said. “We also all had to get in shape for the competition season, which we hadn’t done in over a year. However, I think we were all so excited to play again and that we worked hard and prepared for the season extremely well.”

That strong commitment to competing this season has worked in the favor of UNCA so far, as the Bulldogs won four straight matches spanning from late February through early March. After opening up the season with three straight losses, the team beat conference foes Gardner-Webb and Presbyterian twice each to finally hit their stride.

McClinton and senior libero Kasey West helped lead the way for the Bulldogs in the series of wins. West tallied 30 digs over the span of two matches against Gardner-Webb and contributed 37 total digs in the Presbyterian series. McClinton also excelled against Presbyterian, recording 19 kills — a career high at the time — on .275 hitting percentage in the first match followed by 18 kills, 18 digs, two aces and five block assists in the second meeting.

From making solid passes to setter Grace Volk running the offense to hitting the ball away to score points, McClinton said each player showed up and executed on the court.

“Everyone was doing their job and it showed,” McClinton said.

The wins acted as a key confidence boost for the Bulldogs, something McClinton said the team needed after three straight losses to open the season.

“Confidence is so important in volleyball and these wins are exactly what we needed,” the Louisville, Kentucky, native said. “I’m looking forward to watching our team finish the season out strong and confident.”

UNCA women’s volleyball Coach Frederico Santos said team chemistry has finally come together thanks to better execution by all team members, but the players can improve on this as the season progresses.

“We are learning to play together as a team and I think that is what is going well,” Santos said. “Every moving part of the team is performing well right now. However, this is what we must also keep improving.”

West said she hopes she can continue to perform well for her team and appreciates the honors given to her by the conference.

“It was incredible that my hard work does get recognized,” West said.

Perhaps most importantly, though, the Bulldogs finally have the chance to compete after having their fall 2020 season delayed until the spring due to the COVID-19 pandemic. The team also went on a temporary pause in early February due to COVID-19 protocols within the program, which forced the postponement of a two-game series against Charleston Southern. The pause ended over a week later as the Bulldogs opened up the season against Campbell on Feb. 12.

Santos said he loves simply seeing his athletes enjoy the game that they have missed for so long, especially after the team faced various obstacles before beginning spring competition.

“For me, it has been great to see the student-athletes perform again doing the sport that they love, that brings them joy,” Santos said. “And for this opportunity, we all must be grateful for those who have made it possible for us to compete. The university administrators have done a phenomenal job creating conditions that are safe for all our students, faculty and staff.”

From now until the end of the regular season at the end of March, West said the team hopes to continue enjoying the game they love while also formulating an idea of how they can improve to find success in the long run.

“We all have the same goal in our heads and have a very good team chemistry to achieve that goal,” West said.

With just a handful of matches left in the regular season, Santos said he hopes the team can continue to grow and improve upon the strides they have made this spring season.

“It is important to keep growing as a player and as an individual, but also as a group,” Santos said. “The learning process should never end. There must always be constant evaluation and reflection to help growth.”