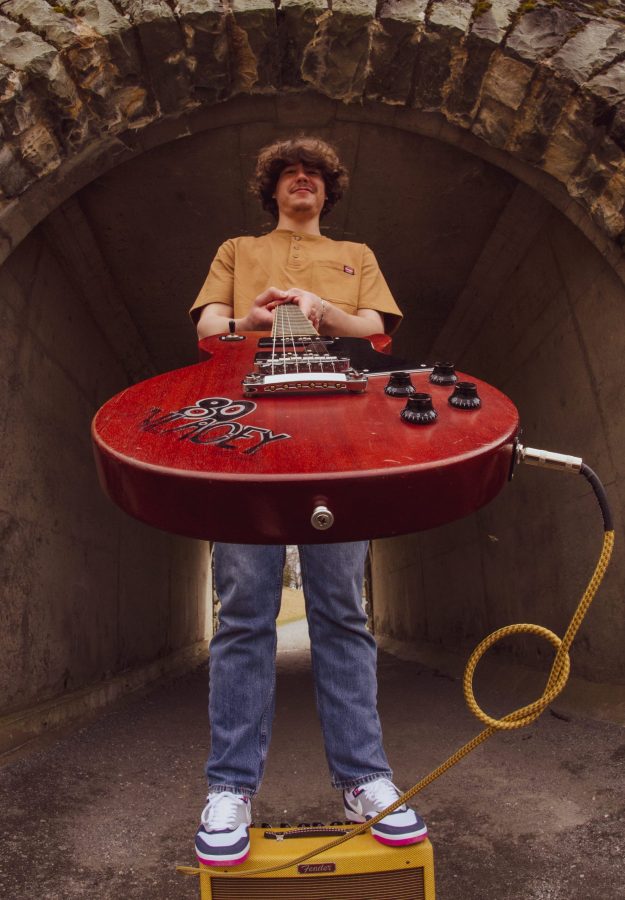 “Bristol,” a song written by 23-year-old Dylan Innes, draws the listener in with its simplistic guitar and soothing vocals as it takes them on the journey to Bristol. Although he never makes it, the song is worth the ride.

“I was just so tired of being in Boone I like Boone, but sometimes it gets really hectic,” Innes said. “I was just like,‘I need to get out of here’, so I just drove and drove.”

Seeing a sign for Bristol, Tennessee  Innes pulls out his phone and sings the lyrics into his voice recorder.

“I just kept having these thoughts while I was driving,” he said. “I came back to it one day when I was playing guitar and I just found a chord progression for it.”

Innes, a member of the band 80 Unlacey, took advantage of the pandemic to write his debut album, Taste the Tide, which he released last week. The album is composed of 9 of his best written songs.

“It’s just acoustic, electric guitar and bass. It’s very simple and not over produced, it’s just like how you might hear me play at a gig,” he said.

Henry Cochrane, a 21-year-old music major at UNC Asheville, said for an economically well-off nation such as the U.S., Americans become enveloped in a globalized world surrounding technology which emphasizes individual identity. He said Innes’ lyrics in “Bristol” draw upon themes of emptiness stemming from this post-human condition.

The music major emphasized the use of chord progressions throughout the song as drawing the focus of the listener to the content of the lyrics rather than the melodic transitions.

“The instrumentation, or lack thereof, breathes an air of simplicity into the music helping to free the listener from instrumental focus and instead turning their attention towards the pairing of the melody’s emotion and its lyrics,” Cochrane said. “‘Bristol’ is easy on the ears and certainly captures the sentiments of living in a post-human world.”

Innes began 80 Unlacey as a solo act and eventually incorporated other members into the group.

“He found me in the music building and asked me to play,” said Alvin Carlisle, a 20-year-old bass player for the band.

Carlisle said most of the band’s songs are written by Innes because they did not have time to write any before COVID.

“The song ‘Bristol’, which is on Spotify, is the song that he wrote once we had joined as a band,” he said.

“His lyrical content is good because he cares a lot about the music, but he’s also just a good person to work with in general. His personality is really fun and it always makes rehearsals and shows a good time,” he said.

Before the pandemic, Innes released other EP’s, due to the difficulty of getting the band together.

“The music happens pretty easily either way,” Innes said. “With the solo stuff it’s on me. If I don’t post on Instagram nothing gets posted. Getting help with the business aspects of it is a little bit easier with the band, not all the pressure’s on me.”

After playing some acoustic songs for his parents, Innes became inspired to create a new album.

“I was just having a lot of fun doing that,” he said.

Innes’s love of music began in high school, when he watched his older friends play a house concert and begin releasing music.

“I didn’t even really care about a lot of people listening to it. I just want some of my friends to listen to it,” he said.

Innes broadened his goals and said he hopes more people will listen to his music.

“Nothing crazy because I don’t want to be like delusions of grandeur or anything but maybe the scale has opened up a little bit,” he said.

Innes said he alternates the mood of the songs in the album to keep people listening.

“I like my songs not to just be about one topic like I kind of shift from the beginning of the song to the end,” he said.

“There’s definitely some sad points in the album and there are some happy points. It explores a lot of shortcomings and failures in life,” he said.

“I figured the least amount of people would actually release an album in March after looking that up. I was trying to do reverse psychology,” he said.

Innes considered a career outside of music and even went to a trade school to become an electrician, but his love for music brought him back.

“Every time I try to step away from it it kind of just sucks me back in, so I think it’s what I’m meant to do,” he said.

Carlisle said Innes can be more confident in his skills.

“He’s a very talented, song writer, musician in general and I would love to see him be more self confident in that and more secure in knowing what he can do,” he said.