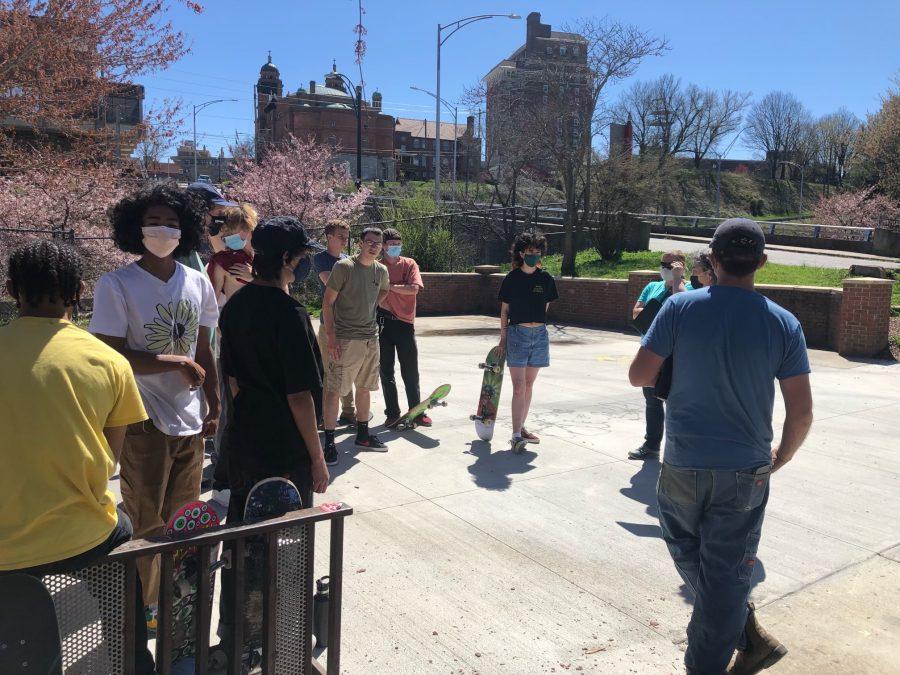 Photo by Cassidy O’Neil The city of Asheville hosted a public hearing to discuss the park’s future on March 26.

The Asheville skatepark, more commonly known to locals as “Food Lion,’’ has been in a state of limbo for the latter half of the last decade with little to no change being made to the park since it’s opening day in 2001. However, as the sport surpassed its original late 90’s and early 2000’s peak in popularity, a new group of passionate Asheville skaters began to make ‘updates’ of their own.

The city’s first official skate park was constructed by X-Games designer Tim Payne and his firm Team Pain Enterprises. Since then, the park has been through several phases of ownership as the park’s initial sponsors Food Lion, Doritos and Mtn Dew have all backed out.

With a clear lack of sponsorships, the city took control of the property in 2016, a change mostly celebrated by the community as it eliminated the need for an entry fee as the park officially became public.

“I feel that skateboarders have the right to access a public facility regardless of their ability to pay,” said Krista Hill, former owner of Flipside BoardShop.

Now being free to skate, the following years saw change in the park’s clientele as the former business turned into more of a public refuge. Kids of all ages and backgrounds flocked to participate in the growing form of physical activity.

“I now see families showing up to the park and with their kids for the first time, female skaters are becoming a regular thing, it’s crazy to see how many new skaters are showing up,” said UNC Asheville junior Andre Barbosa.

The park was constructed with beginners in mind as it incorporates all skill levels of skating with its four level design. The first level was originally the entry plaza where skaters would pay to use the park as well as have access to bathrooms. The other three levels consist of a shallow bowl, a large street course and a large pool which many view as the easy, medium and hard sections regarding skill.

As the park became unstaffed, the need for an entry building became unnecessary and was soon deemed a hazard to safety as it became the target of repeated vandalism and was removed to enhance visibility. With the building removed, for the first time in twenty years there was an opportunity for change at the skatepark.

The newly empty flat section deemed itself perfect for flatground skateboarding, a discipline that relies on the skater’s ability to do tricks without ramps or obstacles but was quickly invaded by makeshift creations.

“I got a circular saw and a drill at my house, and one night we were like ‘what could we build for the homies at the park,’” said Bradley Fagan, a local skater.

Clearly Fagan wasn’t alone as the handmade additions only inspired a chain reaction.

“People just began to dump things at the top level of the park. That’s the thing about a DIY park. It’s all about community and once people heard about the idea, it started piling up,” Fagan said.

For local Ramirez Sanchez, who created a majority of the new ramps, the idea to not only personalize but improve the park felt personal as he has been skating the park since opening.

“It’s something new to skate. On top of that it feels different to skate something you built yourself. When you and your friends put your own time, money and sweat into a project, you build a community,” Sanchez said.

That same community was devastated as after nearly a year into construction, the city told skaters they had 24 hours to remove anything not originally in the park’s plans, essentially telling them to pack up and leave, claiming that since the city didn’t build them, they can’t insure them either.

“I mean, it sucked when they made us take the ramps away. The DIY section gave everyone a place to try out new tricks and was constantly one of the most active parts of the park,” said Sam Crown, founder of local skate brand Moe Skate.

Thanks to the outcry from Crown and the rest of the community that cared about the park, the city agreed to have a public hearing at the skatepark on March 26. The event had around 30 people in attendance and fielded questions on the future of the park.

Questions concerning the longevity of the park and the city’s commitment to improving it were quickly answered by Program Manager Sandra Travis with a laugh.

“We are not tearing the park down,” she said.

On the contrary, the city seems devoted to fostering the skaters’ visions as they see the positives that it brings to the community.

“We wanted to put some obstacles up after we removed the building but to be honest, we do not have anyone on staff that knows anything about skateboarding,” Travis said.

With a successful meeting between the community of skaters and the city of Asheville, the future seems hopeful for the 20-year-old park as the city has approved the return of the original DIY ramps as long as they pass inspection by a city contractor. This will be temporary as the city states the end goal as a fully fleshed out concrete plaza approved by local skaters.

“I noticed a lot more people at the park when we had the DIY. Not just skaters, but parents, boyfriends, girlfriends, homies, it really made the park inviting, something I know it hasn’t always been. I hope the city helps us continue to make it feel like home,” Fagan said.