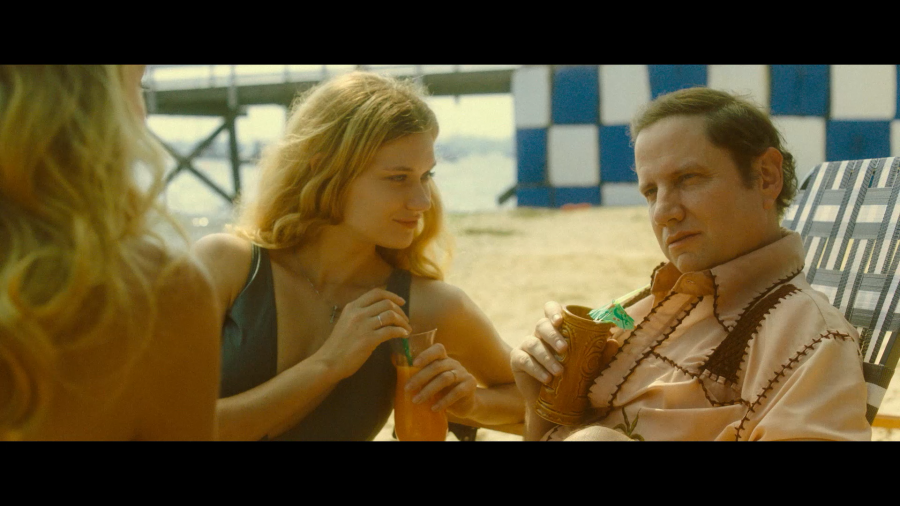 Photos Courtesy of Nick Loeb Jamie Kennedy beach: Larry Lader (right) , played by Jamie Kennedy, flaunts the progress of his organization while on a beach trip.

Roe V‭. ‬Wade, released April 2, attempts to change the narrative on the landmark case by exposing a conspiracy created by the media.

According to Nick Loeb who directed, produced and actor in the film as the main protagonist, Dr. Bernard Nathenson, the film depicts arguments from both sides.

In instances where a valid argument is made, the film ignores it. In one scene, Dr. Mildred Jefferson (Stacy Dash), an anti-abortionist, says, “You know it’s cheaper to abort a baby than to keep it on welfare.” Her point gets ignored by Robert Byrn (Joey Lawrence), a Fordham Law professor and anti-abortionist, saying, “Now it’s in the courts, the interest of the baby will be taken into consideration.”

Throughout the movie it’s clear who’s the underdog that doesn’t win and who’s the evil corporation that’s out to manipulate the public and the judges. The film centers around Bernard and his work with NARAL, the National Association for the Repeal of Abortion Laws, and Planned Parenthood to pro-abortion rights believers.

The film relies heavily on the words and actions of Bernard and his group to push the films’ anti-abortion stance. It utilizes a condescending voiceover from Bernard’s perspective to drill in the film’s message of manipulation of the media to the audience.

The film changes from Bernard and his team to Mildred and her group consisting of the Catholic Church, the National Right to Life Committee and Robert Byrn. For most of the film the group takes little action.

The only actions they take are small protests and a call for an increase on busting underground clinics. Loeb said their actions in the film are reminiscent of what happened in real life.

“That was one of the collapses of the case when they didn’t take it seriously and they certainly weren’t very active and so we tried to portray that,” he said.

The film tries to tell the story through the perspective of both men and women, but it fails in telling the story from a woman’s perspective. The film mainly focuses on Bernard, Robert and the other group of men from both sides.

Roe, the pseudonym for Norma McCorrvy (Joy Summer) is only shown at the beginning of the movie and makes a short appearance at the end. Despite Mildred being the protagonist, according to the film’s synopsis, she barely has a role in the film, oftentimes feeling like a side character. She does nothing but get angry and express her disapproval of abortion.

The film depicts the struggle many women faced with obtaining an abortion in the ‘70s. The most notable scene is the depiction of the busting of an underground abortion clinic.

The scene is shot in an action-like montage where police break into a hotel and ultimately knock out the doctor for refusing to stop mid-operation and potentially causing injury to the woman being operated on.

The film also shows the religious split on abortion by pitting Protestant priests and Jewish rabbis who help direct women to underground clinics against the Catholic Church who are depicted as the films’ protectors against unborn babies. Other than those points, the film is your typical anti-abortion pamphlet, complete with a depiction of fetuses and a man repeating the message  ‘life begins at conception,’ in a condescending tone.

NARAL, Planned Parenthood and Bernard serve as the film’s antagonists and the main culprits for creating the Roe V‭. ‬Wade case. The film depicts the group as a money-loving and manipulative organization with little care for women’s rights.

Larry Lader (Jamie Kennedy) and Bernard are portrayed as sleazy men who only care about money. Most of the NARAL and Planned Parenthood scenes villainize and show them as manipulative by having Bernard do a voice-over, bragging about their corrupt and manipulative actions.

Midway through the film, the case reaches the Supreme Court and the focus of the movie shifts to the judge’s point of view. The court scenes are short and the movie focuses on the drama behind the judges’ reasoning.

The judges debate their role as they question the power they wield. Debates of right to privacy, separation of religion and state and the bases of life emerge from the short climax of the film.

After the court scenes, the movie struggles with its resolution as it concludes on the repeated message of life beginning at conception. The ending is a mess of events mainly following the anti-abortion group as they continue to question the court’s decision and repeat the aforementioned message.

It also shows Bernard’s reasoning for being anti-abortion and has a cliche scene of a man yelling at God in a empty church. Overall anger is the only emotion sparked from the film.

Whether you’re anti-abortion or pro-abortion, you’ll finish the move more instilled in your beliefs because the film does little to persuade or educate the audience about the opposite side of the debate.