Students describe the infuriating experience of dorm life in a pandemic 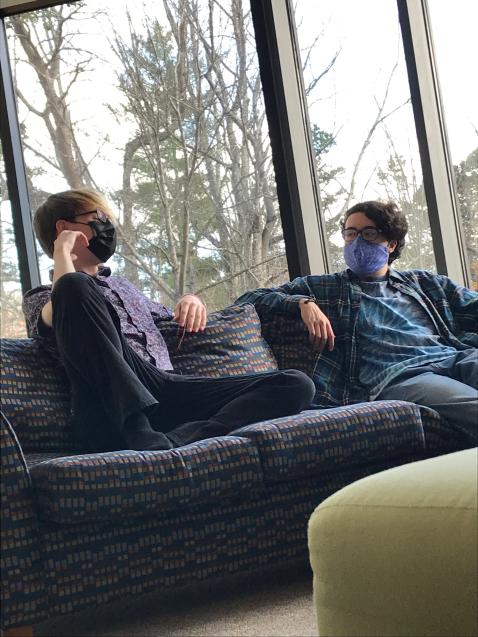 Andrew Hare, a junior, computer science student who has lived in UNC Asheville’s Ponder residence hall since last year, shared he often hoarded his room with water bottles to avoid interacting with others at his dorm’s water fountain.

As a resident assistant of Ponder Hall, Cameron Martensen’s duties of keeping track of the residents of his hall has changed since the COVID-19 outbreak. He said he noticed the distinct lack of people in rooms with a majority of those rooms given to a single person.

“I’ve noticed few people returning to campus, even my friends. When we assigned rooms to returning students and students new to our residence halls, some of them received rooms of their own. This is unprecedented as we don’t usually spare rooms for one person,” Martensen said in November.

According to Martensen, Ponder Hall attracts less people due to a new COVID-19 policy for visitors. Non-residents can’t enter the dorms.

“A few things have changed in regards to visitors to residence halls. You live off campus, you are not allowed to come into the halls at all. This is out of precaution of the virus, of course,” Martensen said.

Martensen also said students solely taking online courses don’t have a reason to leave their rooms. Some of them went nocturnal due to only having online classes.

“There’s not much reason for them to get out of their rooms. Out of fear of the virus, only needing to go outside to have food. I would be fine doing this myself, frankly, but I have my duty as a RA. I can see this as common for other students,” the resident assistant said.

He said his neighbor practically never leaves his room, that he acts nocturnal because all of his classes are online.

“He’s awake when it’s class, then falls asleep. I hear him awake during the night playing video games and clacking on his keyboard. It’s hearing that when I try to feel asleep which mostly disrupts my sleep cycle,” Hare said.

“I had an initial frustration over having to wear the mask and people not taking safety precautions seriously; however, I think it’s a nice change of pace to finally have my own room. It’s the first I’ve had in UNC Asheville and, to be honest, it’s quite relieving to finally have some peace of my own. I also get to finally get the mask off when I walk inside my room,” Hare said.

As with everywhere on campus, he said elevators are a known death trap to catching the virus.

“Typically, you want to avoid elevators because that is what makes you catch COVID, so I never went in one this entire semester,” Hare said.

Hare said dorms are pricey, leading him to say those that don’t return perhaps don’t want to strain their economic limits.

“I think people don’t return because it’s a dollar off expenses. It’s also costly to manage on your own, despite having a meal plan,” Hare said.

In response to the COVID-19 shutdown, a significant number of UNCA students applied for the CARES Act grant, a relief fund for students, according to Associate Director of Financial Aid Shannon Shepard.

“Initially, the CARES Act Funding was disbursed to approximately 2,268 students with no application needed based on need.  Once an application was open for subsequent rounds, approximately 700 students applied near the start of the year,” Shepard said, in November.

Shepard said the CARES Act was intended to support students who needed money when lockdown was first initiated.

“The funding is intended to help students with food, housing, course materials and technology when classes moved to remote instruction,” she said.

Shepard said a reported $1,679,747 was given to students who filed for this grant.

“We expect students to use this money for something that is directly related to the disruption of campus operations due to COVID-19,” Shepard said.

Other acts such as Emergency Grants through Student Affairs and the Levitch Emergency Student Loan are offered to students in financial stress, according to Sheppard. But they remain unaltered in response to COVID-19.

“The Federal Perkins Loan is a need-based, low-interest fixed rate (5 percent) loan for students. No interest is charged while students are enrolled in school at least half-time. Leonard S. Levitch Student Emergency Loans are interest-free, short-term loans.  The purpose of the loan is to finance emergency expenses for currently enrolled UNCA students for which resources are temporarily not available,” according to school officials.

On April 7, Hare said he thought more students came back to campus, considering how well UNCA handled the pandemic last semester. But it was the same situation for the dorm resident.

“Not many have come back. In fact, the numbers have been down from what I noticed. There were a noticeable number of people, particularly in Ponder, who have just left over the course of this semester,” he said.

Regarding when he talked about loans, he said those people who left moved out mainly because of the platform of their classes. Taking all online courses, they could simply take their classes from home.

“I have noticed they all left because what would be the point? All of their classes are online. It’d be a waste of money,” Hare said.

Hare said he’s optimistic about the new semester. With the vaccine being administered across the nation, some restrictions will be lifted and the fear of COVID-19 spreading, qualmed.

“I’m looking forward to it. Everyone will be back and vaccinated in some form. It’s nice to hear ‘Look, everyone has been vaccinated, let’s ease some restrictions now.’ I can’t wait to have people breathe together, do stuff together and whatnot. However, we should proceed with caution because we have no definitive end to the virus,” Hare said.