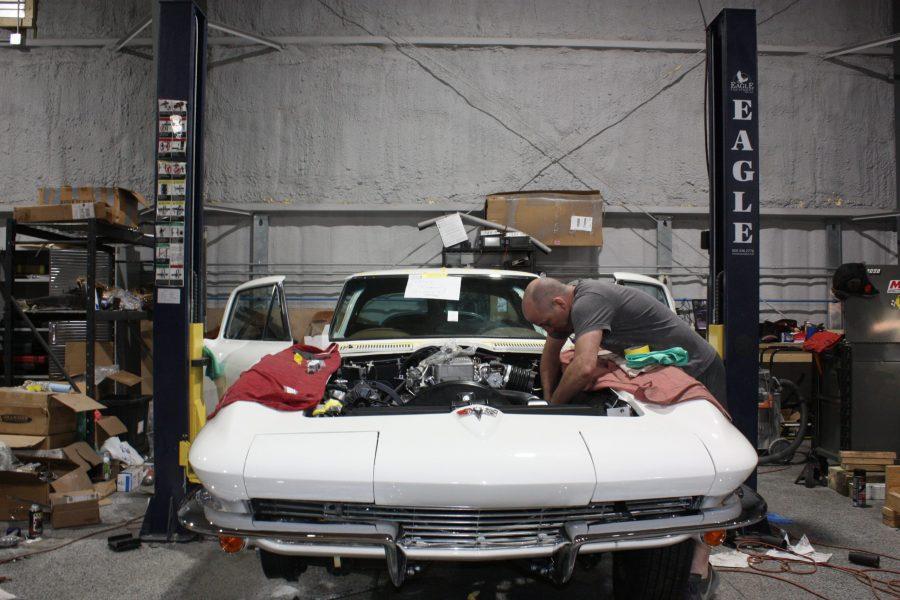 Photo by Diego Garcia David Snyder leans over a 1963 split-window Corvette, one of his many restoration projects at his shop just outside Asheville.

It all started with a dream that began in a 1,500 square foot storage facility. David Synder’s ambition to produce quality work that met his expectations paid off as he now owns a 20,000 square foot facility northwest of Asheville, North Carolina.

Finish Line Motor Works flawlessly encapsulates Snyder’s vision: he wanted to create a one-stop-shop that does everything, though his business card says they specialize in custom classic restorations.

The outside of the shop stars the 1964 suicide door equipped Lincoln Continental, the same model that John F. Kennedy was assassinated in, the 2019 Bentley and BMW M4, a jaw-dropping sight. The cars range from old to new, an extravagant display in the front, showing only a glimpse of the vintage goldmine that lies within.

Synder, a well-tempered and humble man in his early 40s, remains ambitious and hungry to bring his ideas to life. He is subtle but creates the most unexpected works of art through his projects.

He wears a plain shirt, cargo shorts, a G-Shock watch in a flat-green color and athletic shoes. He’s not your average car painter or car enthusiast. No matter what Synder does, from cooking at the chef level to oil painting, he never fails to go above and beyond   his expectations.

As Snyder opens the colossal garage door toward the paint and body shop side within, one can see a long-term project that his team is wrapping up. A classic Ford 40 concealed in dust and a plastic cover on top of it with a missing hood exposing the heart of the beast. A brand new crate engine sits within the engine bay, a 5.0 liter Coyote motor, usually found in 2018-2020 Mustangs and rated for 460 horsepower.

“I love the 40,” Synder said. “It’s a Ford with a custom chassis because of the size of the drivetrain we put in there, so it’s got disc brakes, power steering, all the modern comforts and accessories. Everything was custom and fabricated in-house, all the brackets we made in-house as well. It’s all custom, everything was fabricated.”

Just a short walk away, Synder then shows one of his most current works of art, a 1975 Ford Bronco that just came out of the paint booth a few weeks ago, another one of his favorites. Sitting on big wheels and disassembled with just a bare chassis glistening with shine, everything was painted from the floor pan to the door jams. He tells a unique story on the customer’s requested color choice.

Snyder’s enthusiasm is clear in his smile ear to ear; he knows it’ll be a   fast truck.

On the other side of the massive facility, which Snyder calls the performance section of the shop, you see a number of motors sitting in storage, LS Corvette motors and showcase vehicles are met, like a mint orange Pontiac GTO called The Judge or the classic FJ Cruiser on the lift. He painted it in a candy blue color and will get an LS swap; the list goes on and on.

He walks over to the ‘63 Chevrolet Sting-Ray Corvette that he’s really proud of. Within the windshield, you can see a sign that says ‘do not touch without gloves.’ The car looks brand new and underneath is immaculate.

“The ‘63 split window ‘Vette. This is about a $260-$275 thousand car and it was all painted here as well. I’ve just been buffing it out for now,” Synder said nonchalantly about this masterpiece.

Synder begins to ramble on about his process with this car. At one point, the body and chassis had been separated to restore it.

He goes into depth about the paint process. He begins with all the small pieces and then the next day, he does the body of the car.

“They made it for one year. They only made the split-window Corvette in 1963. This one in particular is a Fuelly model, which is the fuel-injected model. I’m not sure how many of these they made, but not many; it was definitely a low number. This one also has original tinted glass and it’s a concord restoration, so it’s going back to 100 percent factory,” he said, his expression changing the more he spoke about it.

Two of the split window Corvettes reside within the shop, a white one containing an original paint color that came on that model. The other a mustard yellow, basically a shell.

“Out of all the Corvettes, unless it’s a prototype or a race car, this is the most desirable, especially for collectors,” Snyder said.

Another side of the business that makes it possible to have a complete one-stop-shop, the in-house upholstery section, is a world of its own. Run by Rez Galvao, one finds Pit Stop Trim Shop.

Galvao, a high-paced individual in his early 40s, grew up as a skateboarder in California, wearing a pair of Vans with high socks and an all black button-up shirt with his business logo on the left side.

When walking into his side of the business, one can see a multitude of different available designs, including fabrics, mid-century furniture frames, example models of cushions and multiple industrial-grade sewing machines as well.

Galvao also brings his dog Hillary into work, an old English bulldog. In front of his business desk sits a huge lamp with a Hawiian girl carved into it. The front desk, that Galvao also custom made, has a plush diamond tufting design in black and white.

“Very few places do what we do in the States. For example, before I was on board, they were sending their upholstery work out to Utah and I’m killing it,” Galvao said.

The business relationship began when he reupholstered a Toyota Land Cruiser’s dashboard for Snyder. Galvao’s work speaks for itself as he’s booked throughout the summer.

An exciting project Galvao calls “survivors” puts into perspective his particular style and taste, such as vehicles like the 1966 Dodge Coronet sitting outside the shop near the Volkswagen Winnebago, currently getting the interior done.

“So we’re doing it from a rendering of that year that they did at a car show when they were bringing this car out in ‘66. They didn’t even build a car like that but we’re building it like the

rendering that they made, what they wanted it to be, not like what it came out as. Like the drawings they made for it, we found those things, so we’re doing it like that,” Galvao said.

Galvao discussed the importance of style and uniqueness, like his El Camino outside the shop, which sits on mud tires. The exterior displays the same ‘survivor look.’ It appears a bit rusty outside, but it adds character. The all-wheel-drive vehicle he converted represents what he likes.

“You know, I like trashier cars that are survivors, where the interior just looks amazing, you know. I could care less about the paint, that’s whatever, I want it to be drivable,” Galvao said.

Galvao, a versatile person within his craft, explained that being at the shop, one never knows what will show up. It could be a Mclaren or an older car like the Coronet. He even enjoys new cars, for example, a 2019 Charger that will be getting the interior redone.

“I learned all over the place. I worked in about 30 different shops throughout the years and you know, just blood, sweat and tears,” Galvao said.

He said  his passion for interiors started with boats, vans and furniture. He’s passionate about what he does and he even wants to pass down the trade.

There are more than enough sewing machines inside and he’s currently teaching eight students how to upholster, although the classes are much smaller since the pandemic started.

The front of the shop displays some of his students’ work and their miniature versions of furniture that Galvao has created to teach them.

“So the way I teach people is by creating miniature versions of half scales of all my furniture because if you can build the half scale version, you will be able to do the actual size versions. It’s way easier doing the bigger scale versions once you know how to do it, like quarter inch to a half inch,” Galvao said.

Galvao very confidently explained the process, including the prices of materials and how by using miniature versions, he ends up saving materials and money. He also explained how some people that have learned from him are now owners of their own shops.

“So in a way I want to teach people how to do it right and to revitalize this craft. I want to keep the trade going, the culture, the trade, everything, I want to give it back to the people so I can have some competition,” Galvao said, laughing.

One of his apprentices, Sierra Grenados, who also skates, wears  a green Independent skate hoodie and jeans with Vans skate shoes. A local to Asheville, practiced in the shop on a Wednesday afternoon and a bit shy, she explained how she came upon this opportunity to learn.

“So when I met  Rez’s friend Finley at the skatepark he told me that they were swamped with work. I just kept bugging him about it because I wanted to learn something hands on,” Grenados said.

She was a bit nervous as it was her second week as an official apprentice.She practiced on the basics which is learning the box cushion. It also got harder for her to act upon the opportunity because she wanted to be Galvao’s apprentice before COVID-19 but then got pregnant and things got complicated. She’s able to come in three times a week now and is grateful for the chance to learn.

“Yeah he’s really cool and he’s a good teacher. He’s on it. He’s also a skater, so there’s that relationship with it because in skateboarding you do it over and over and over again until you get it right. So it’s like teaching yourself in a way but with a good mentor that teaches you all forms of upholstery which is rare,” Grenados said.

She went on to  say that the first day at the shop, she had broken one of the sewing machines, but Galvao’s very patient. He knows people will mess up at first, as she had little experience with the craft but felt that she would get better.

She hopes to work on car interiors one day.

“I want to learn how to make cool car upholstery. Like, I really want to make Cholla upholstery. I want to have an El Camino like Rez and stuff but I’m just trying to figure it out, like, the basics,” she said.

Grenados is just soaking in what she learns and just wants to have a trade under her belt as it’s something that she can take anywhere.

“I don’t have an end goal. I just want to learn how to do it and take it day by day,” Granados said.