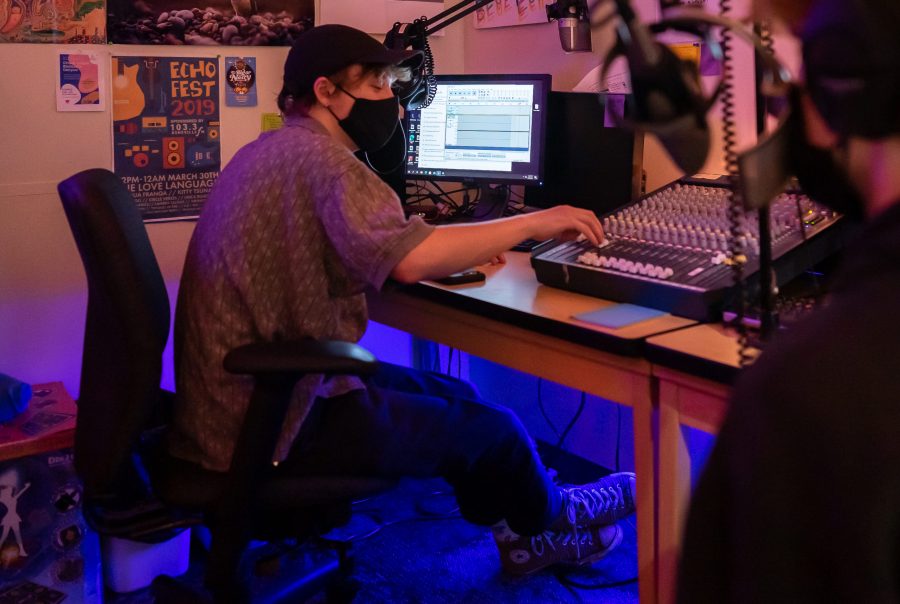 Photographed by Raeanne Genthworth Lawson Alderson explains how students can listen in and get involved in what's happening with the Blue Echo.

UNC Asheville’s Blue Echo has been off the air for a year. But with a dedicated staff, a commitment to the UNCA community and an innovative plan for the future, the radio station looks to take on campus once again.
COVID-19 hit the Blue Echo hard last year when staff were forced to cancel the staple live show, Echofest, days before its scheduled date. A free community driven event, Echofest planned to host 14 or more bands, food trucks and community vendors.
Lawson Alderson and Seth Maile, members of the Blue Echo, recalled the events that led to the Blue Echo’s hiatus. Despite seniors graduating and leaving them with no executive board, to the pandemic stalling in-person progress and internet radio as a medium being outdated, they persevered.
“The world slapped us in the face when the pandemic came around,” Alderson said.
While the pandemic stalled their progress, they have come back to give the Blue Echo a fresh coat of paint and revive it to its former glory. The Echo has turned to multi-faceted content creation rather than solely internet radio.
The staff have tossed around new ideas, such as a tiny desk concert-like show, a YouTube series, various podcasts, performances from local musicians, small live shows and leaving an open door to anyone in the UNCA community who has a creative idea.
“That’s really the goal of this upcoming year,” Alderson said. “Put a spotlight back on the content that these creators are making and to really just push them as far as they can go.”
Both Alderson and Maile said they want to take advantage of the resources UNCA provides them, such as a built-in audience and technical equipment for their creative endeavours. They intend to share that with the UNCA community as well.
One of the primary goals of the Blue Echo has always been to give the students of UNCA a voice, whether that be cross promotion between the Blue Banner and the Blue Echo, or a student unaffiliated with the radio station bringing a new idea for a show or promoting their own music.
“Just as the Blue Banner is the voice of UNCA, we are the megaphone of UNCA,” Maile said.
Stephanie O’Brien, lecturer of mass communication, who holds a doctorate degree in cultural studies, has witnessed the new changes. Before COVID-19, the Blue Echo solely focused on internet radio and producing live events.
“I think their plan of producing more on-demand content is insightful as they are taking into account what their target audience wants in the changing landscape of audio storytelling and music,” she said.
The Blue Echo also plans to bring back Echofest in the future. Members of the Blue Echo said they were heartbroken and disappointed after all the work that went into 2020’s Echofest had to be scrapped due to the pandemic.
But the Blue Echo does not intend to fully ditch its past. They said they have expressed interest in collaborating with Girls Rock Asheville, a nonprofit camp that educates girls,transgender and non-binary kids from ages 8 to 14 in music, and plan to do more charity events with Asheville organizations
Maile said they want to put content back in the hands of students, ensuring that the UNCA community remains a top priority for the Blue Echo.
“I think it’s name recognition, people just knowing who we are,” Maile said.
They Also plan to work with the mass communication and music technology departments on campus and team up with the Blue Banner to produce content for the Banner and the Echo. The Blue Echo staff invites other clubs and organizations to their studio as well.
“We want to fill that void of an all encompassing broadcasting organization that dabbles in live events, put on a festival every once in a while. We kind of make the needs of the students in the community happen,” Alderson said.
Blue Echo members plan to hold an interest meeting in Highsmith Student Union on Monday at 7 p.m. in room 128. The staff of the Blue Echo invites musicians, editors, content creators, people with good ideas and the larger UNCA community to attend.